The Marches culture and customs

The Marches culture and customs 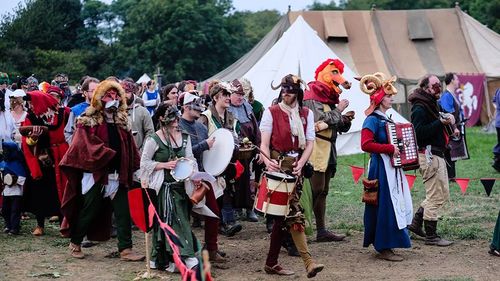 Tried and trusted traditions bind the folk together and give a context to their lives. Traditions such as hue and cry, rough music, shunning, shriving and beating the bounds and sacrifice are all part of a system that has worked to make the Marches strong for centuries. Several of these traditions have their roots in necessity - when times are hard, people who act against the interests of their neighbours endanger the entire community. These traditions help to maintain the cohesion of a community, and lay down punishments for those who act against the communal good.

The Marcher attitude of taking matters in hand is the basis of the hue and cry, the old tradition of law enforcement in the Marches that still endures. Any Marcher who witnesses a crime can raise a hue and cry. All able-bodied people, upon hearing the shouts, are expected to assist in the pursuit until the felon is apprehended. In the pre-Imperial past, the hue and cry would often result in summary justice for a criminal, which occasionally lead to innocent people receiving harsh punishments. Today, suspects are turned over to Imperial magistrates to judge. The readiness of the Marchers to defend the common good derives from their belief in doing the right thing and their pride that they are up to the task of getting it done. 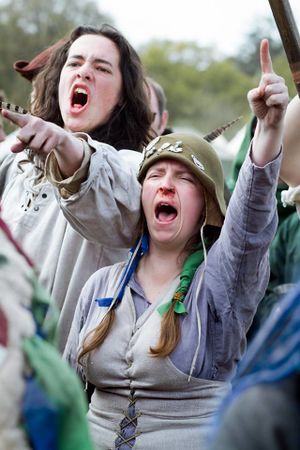 The rough music is a particularly egalitarian form of punishment.

Those who break Marcher traditions are often publicly shamed. A suspected sorcerer, for example, is a likely target for a shaming; for "rough music".

At its simplest, rough music is simply a group of Marchers making a lot of noise outside the house of the person they're punishing. Rough music is a peculiarly egalitarian punishment. The more Marchers agree with the punishment, the louder it is. The more serious they deem the transgression, the more effort is made in preparation. The more outraged the people are by the behaviour of the target, the longer the music will go on. Some particularly egregious offences see the perpetrator driven out by the din, forced to leave their home behind and hope to start a new life somewhere nobody has heard of their transgression. Sometimes the rough music follows them.

It may start with a procession, it may simply be a gathering. Like a lynch mob, it rarely has any sort of formality to it. The precise nature of the "music" varies across the Marches, but it is always noisy. The noise may just be chanting, or it may involve drumming, rattles, bells, hooting, and improvised instruments such as pots and pans. Sometimes, the victim is presented in effigy, and at its most sophisticated the target is shamed by theatrical performance or puppetry. The only rules are that nobody lays a hand on the target unless they start a fight, and nobody actually enters their home. (See Marches Music for some suggestions regarding rough music)

Those who persist in ignoring Marcher traditions may end up subject to Shunning. Individuals who are shunned are effectively cast out of society. They are turned out of their household and find every door closed in their face. Helping or in some cases even acknowledging someone who has been shunned can result in the offender being shunned in turn. Shunning may last for a week, a season, a year or even indefinitely. The extent of the punishment depends on who is enacting it – one family may shun another and anyone who helps them, or an entire household or town might shun someone and encourage all their allies to do the same. Many individuals who are shunned are forced to leave the area.

Children are never shunned. Until someone has passed their test of adulthood, they may be punished by their parents but they are not considered mature or responsible enough to gain any benefit from being shunned. Adults who suggest shunning children are considered to be idiots. 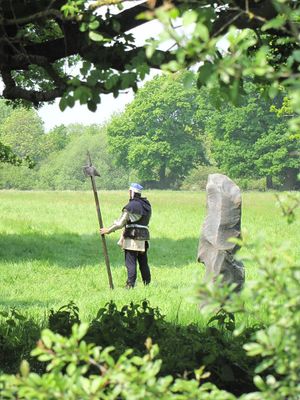 An old Marcher tradition says that dark deeds can be mitigated through disavowing their actions and to cleanse their souls through the practice of shriving. A Marcher will often seek out a trusted friar or monk and share the onus of their wicked thoughts or unvirtuous deeds. A priest who hears a confession transfers some of the culpability for the dark deeds recounted to themselves; only an individual who is certain their soul is relatively unsullied will offer shriving.

The beating of the bounds

The beaters mark out what is Marcher and what is not, and they help the Civil Service with the recording of who is loyal to whom. The Beating of the Bounds usually takes place after the harvest is in. At this festival every Marcher marks their land, by walking around the boundary led by the beaters. Certain stones, trees or other marker points around the boundary are beaten literally, ceremonially striking them with sticks or willow wands. Market towns beat the boundaries laid out by their warrant, and individual market towners often have a second ceremony in which they beat the bounds of their shop or workplace.

The ceremony is designed to remind all of the size of the holding, but it also works to remind everyone of who is part of the community and who is outside it. On a practical level, the beating of the bounds is often preceded by the beaters ensuring that the boundary areas are safe for the upcoming ceremony, and followed by a period of maintaining and replacing whatever physical markers delineate the bounds - it is a time for repairing fences, planting hedges and the like. 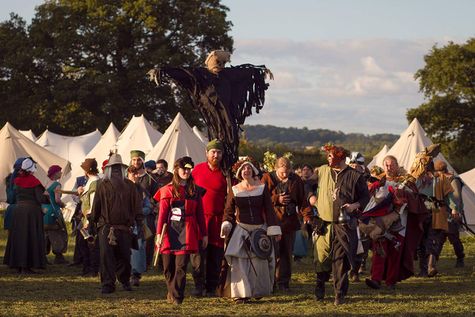 After every harvest, Marcher farmers perform this traditional religious ceremony to celebrate prosperity. Wassailing varies from place to place but typically involves parading through the village singing and drinking to celebrate the health of the fields and orchards. Food and drink produced during the year is consumed or left as an offering; ale might be used to toast a barley field or a pat of butter buried in a dairy pasture. The parade is often led by the children of the village. As the yeomen go from house to house they share food and drink with their community and receive in return a taste of the food that each household has in excess from their own harvests.

At each Autumn Equinox, Marchers parade from camp to camp, singing the Wassail and sharing their home-grown produce with other nations. Although not expected, other nations often reciprocate in small token exchanges of goods that their own territories have in abundance.

Wassail songs can be found on the The Marches music page. 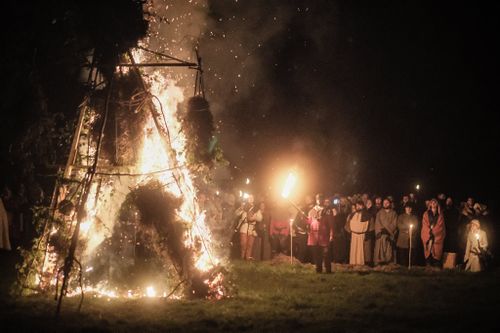 Don’t judge each day by the harvest you reap but by the seeds that you plant. Well sown, Ned. Well sown.

This is a large figure of wicker and wood, which is set alight to burn sacrifices. Ideal sacrifices are things that have been raised by mortal hands from the land such as crops and domesticated animals. These sacrifices are made to atone for acts of vice. By giving up the rewards of prosperity, and creating the need for more prosperity to replace them, the Marchers believe that they make reparation for their unvirtuous behaviour and in this way ensure that they reincarnate well in the next life.

The greatest sacrifice of all is to give up your own life. This is only ever permitted for individuals whose failure cannot otherwise be redeemed. Primarily this responsibility lies with a person whose actions cause a Marcher territory to be lost. In Marcher eyes, that individual - and everyone who worked and fought for them - is responsible for the failure. By going voluntarily to the wickerman a general or senator absolves not just their own failure but the failures of everyone who served under them. A recent example was in 349YE when former Senator Thomas Overton of the Mournwold went into the wicker man to absolve himself for his inability to keep his territory out of Jotun hands.

In Autumn 381 YE, former general of the Tusks Nedry Galest of the Cullach went to the wicker man to atone for the curses on the Mourne which had killed so many. "Only Remembered For What We Have Done", they sang as he burned.

Which precise epithet is shared with the enemy here is unclear, but context suggests a typically Marcher piece of salty wit.

Marchers are keen on mottoes and folk sayings. Many Marcher households adopt a single motto, a phrase meant to formally summarize the spirit of the group. Marchers in general make common use of proverbs, pithy pieces of folk wisdom often expressed as admonitions. Favourites can have double meanings often unnoticed to the outsider. Individuals generally pick one or two that they like or find particularly wise, but some collect dozens of sayings and employ them at every opportunity. While there are some common Marcher sayings that many people know, nobody could expect to know all of them and new ones are regularly created when a pithy comment is repeated.

At their best, Marcher folk relish competition. All kinds of sports and ball games are taken very seriously, to the bafflement of outsiders unfamiliar with the subtleties of rules that often only exist in oral form, depending of the regions involved. Foot-the-ball might be a simple game of five-a-side or it might be a more traditionally Marcher game with unlimited participants. Stick-and-ball might ban sticks wielded above the waist, or might, in a version much favoured by some younger Marchers, be played at head height. There is no centralised authority to define and enforce rules; it's traditional for participants to double-check their understanding of the rules before they start. Sporting competitions are sometimes used to decide serious matters or settle disputes. In some cases participation may even be part of ancient treaties between Households.

Beaters Annals for the Household of Barrowfield, Summer’s End Festival, Year of the Empire 294

"I hereby bear witness to the annual match between the allied lesser Households of Elderhowe and Youngerhowe to determine cultivation of the Old Howe orchard, as is the custom since the division of Old Howe farm between the Sons. Rules were agreed as follows:

Let it be recorded that Elderhowe won by three scores to two, retaining the orchard for a fourth year. Bond of three baskets of apples, three of pears was promised to Youngerhowe for six pairs of strong hands at picking time.” 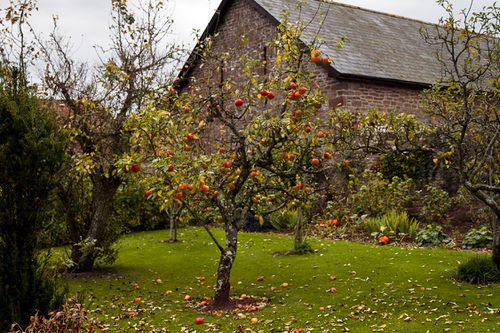 The dead rest peacefully beneath the shadow of the apple trees.

Marcher dead are buried in good fertile soil, often with an apple seed or small apple sapling planted above the body. There are plenty of stories of Marchers who die far from home and who "rest uneasy in the poor soil, cold in their stony beds" as one song (The Unquiet Grave) has it. Sometimes these are little more than ghost stories, but there is some evidence that so ingrained is the desire to "sleep beneath the apple trees" that the spirits of dead Marchers may trouble friends, relatives or even random travellers until their remains are given a suitable burial.

Should an apple tree actually sprout in a graveyard, the apples are not to be gathered, but are free for the poor and desperate to eat. The wood of these graveyard orchards is said to contain some of the wisdom or knowledge of the deceased. Many Shunned individuals survive on apples taken from graveyards. There is also a common belief that for those souls who have achieved true greatness, the grave is a literal “resting place.” According to this superstition, the greatest heroes of the nation simply slumber beneath the ground, ready to defend the Marches in its darkest hour.

Very few Marcher heroes lie on the cold marble biers of the Necropolis, and those that do have a good thick layer of soil in the tomb under them.