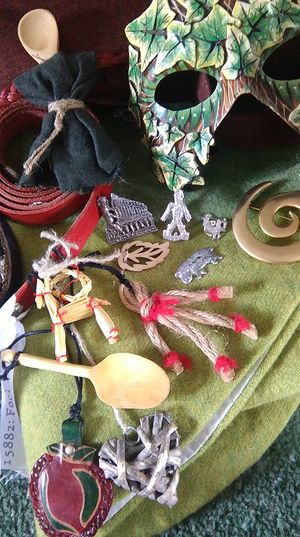 Every home in the Marches has at least one straw dolly or poppet, made at the time of harvest to bring good luck to the house and ward off evil omens. These intricately twisted and knotted effigies of straw, corn, oats, rye, grass or rushes traditionally bind the vitality of the fields and bring their strength into the home. Every child is given a straw dolly of their own to help protect them from sickness. In particular, an expectant mother will carry a poppet to ensure the health of the child. When the season turns again to sowing the seeds for the new crop these poppets are laid on the fields and ploughed back into the earth, or occasionally cast into a bonfire, ensuring a bountiful harvest for the following year. 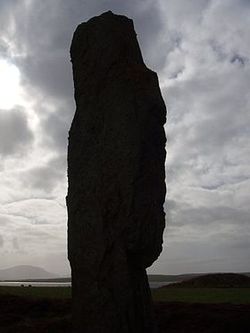 A landskeeper might employ a poppet in magic that binds or shares vitality or strength, such as granting potence of a band of yeomen warriors. A sorcerer might use a poppet to steal the strength of an enemy or an enemy's fields, binding it as they twist and knots the doll until the poppet is destroyed or a year has passed.

The dolmens and chalk figures that are common throughout the Marches mark the land as the property of humankind. They stamp the presence of humans on the environment, and by doing so seek to tame the forces of nature. A Marcher who wants to claim an area of wilderness will often begin by placing a standing stone on the boundary of the area they plan to claim. Likewise a circle of landskeepers who plan to enact a large change, such as flooding a valley or improving the fertility of an orchard, will use a standing stone or chalk figure as the centre of their working. The power of the hearth magic derives from the way the stone or figure resembles a person, so some dolmens are painted or carved with human features.

She measured off the lengths and tied them off. A handspan for each one would do it. Some of that pudding string would do nicely. And a good tight reef knot.

The paint was dry. It wouldn’t be a fine job. Not like a calligrapher had done it on parchment, but it would be a job. Serviceable. She’d given the spoons a rub before painting them. She looked at the pile of rags left over the years from making things: hoods, bags, gowns, tunics. Any bit bigger than the palm of your hand, her mother had said. You can always find a use for it. Bit of linen for a herb bag, bit of wool for a pincushion, scrap of this for that and that for the other. Nothing wasted. Smaller bits got chopped up for stuffing. As she cut and tied and twisted and tugged, they took shape. That was another thing her old mum had said: poppets don’t have to be made from straw. You make them from what you use all the time. From bits and bobs about the house. Things like rags and string and spoons and pegs. What mattered was that all the things that made the poppet meant something. All the things had a part in your life other than just as a poppet. Spoons and pegs that were used all the time, rags from making things, string that tied things. Rafia and twine from the garden, wheat from the harvest... And the hearth magic. The warmth of the heart, the love of the land, the care of the people who lived there. The stars that guide us, the turn of the seasons. No big words, no mighty deeds, no incantations or rituals, nothing other than the rhythm of the work and the satisfaction of a job done to the best of your ability and the way you had of doing it.

When they were done, she stood them all in a row on the bench, in little pots. Twelve little figures in a row. She could feel the power in them. Gentle but strong, waiting, expectant.

by Nesta of The Applewood Levy

The child looked up at me with large, unblinking eyes; a rough dolly of woven cornstalks clutched to her woollen tunic with one grubby hand. Thinking that perhaps I might build a rapport with her, I asked if I could take a closer look at the hideous thing. As I began to reach towards it she started in surprise, sank her teeth into my finger hard enough to draw blood and then ran off shouting that I was trying to steal her soul! Moments later several grim-faced Marchers approached with the girl in tow and confronted me. I assumed that perhaps she would face punishment for attacking a visitor in this way, but in fact when they heard the story they sided with her – one even ruffled her hair! I was advised in no uncertain terms that “Marchers keep to Marches business, best you do the same with your own.” I would have argued the case, but I couldn’t help noticing the subtle air of menace with which they were gripping their agricultural tools…