Nobles deserve the finest accoutrements, and it is up to their Seneschals to find a way to provide them.

Money is a frequent challenge in Dawn, especially for the noble houses. There is no glory in making money; an obsession with money is seen as tawdry, something that is beneath those who have proven themselves, so most nobility express a very public disinterest for it. As a result merchants and those who handle money are almost always yeofolk.

This can lead to unfortunate circumstances - many nobles are so used to the idea of having enough money for whatever diversion they turn their thoughts to that they have little concept of what something is actually worth. Their unworldliness is one of the reasons that they have difficulty maintaining support in the Senate, which (as far as many nobles can tell) spends more time worrying about budgets than it does about glorious battle against the enemies of the Empire.

Still, the bills must still be paid, so most houses employ at least one seneschal. Seneschals are a broad class of yeofolk retainers who include chamberlains who organise and oversee the day-to-day household affairs of the nobility and castellans who see to the care and maintenance of castles. Regardless of their specific duties, seneschals are generally responsible for handling the finances of a noble house. A seneschal runs the house's affairs on behalf of the nobility and can be one of the most powerful individuals in the house.

There is also an element of "problem solving" about the duties of a seneschal. Many nobles do not want to be troubled with the mundane details of a task, and it is common for a noble to announce a tourney with only a few days notice, or expect their trusted retainer to make a problem go away without offering any suggestions or guidance as to how such a task might take place. Occasionally, this trust may be abused - a seneschal might go too far in the service of their noble house, and bring shame to their house.

Seneschals tend to work on behalf of a noble house, and usually have a close relationship with the earl of that house. The system works so well that a few nobles are attended by a yeofolk, called a retainer, who acts in a similar but much more personal capacity. Dawnish retainers combine various elements of valet, maid, personal assistant and servant in one person. They attend and assist a noble, seeing to the day-to-day support of their patron. By necessity, there is usually a deep bond of trust between a noble and their retainer and they are often close friends. It is common for a seneschal to begin their career as the retainer of a noble who later becomes Earl of their noble house. 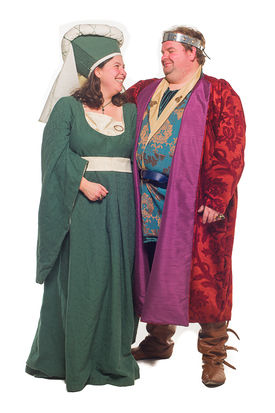 Dawnish merchants are almost invariably yeofolk, but skilled crafters are more likely to be members of the nobility. The ability to make beautiful - and often magical - objects for the use of their fellow nobles is seen as a noble calling it its own right, and few nobles want to see a yeoman with such power over other nobles.

Noble crafters prefer to dedicate their time to making glorious weapons that can be wielded by great heroes, rather than producing a dozen breastplates for a unit of yeofolk soldiers. Because of this most houses struggle to find ways to equip their soldiers, being forced to rely on seneschals to provide the weapons and armour their troops need. Seneschals, in turn, are forced to look to the more prosperous nations such as the Brass Coast or the League to equip their forces, a situation that their neighbours are never slow to point out whenever they want to irritate their Dawn neighbours.