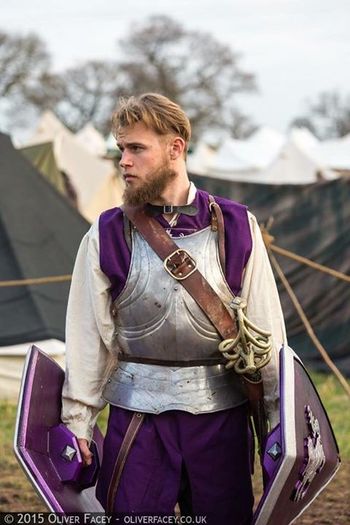 A retainer acts as a skilled servant or aide to a noble or a House.

A retainer is either a Dawnish noble's personal attendant or else an attendant to an entire noble house. Retainers are always yeomen, although some harbour a desire to prove themselves and earn an opportunity to pass a Test of Mettle.

The basic role of an attendant is to act as a skilled personal servant, ensuring that their noble, or the noble members of their house are able to enjoy the privileges of nobility. They are likely to help a noble dress themselves and prepare for battle, they fetch and serve drinks and so forth. However retainers are much more than simple servants, their roles often include handling a noble's money, arranging their personal finances and they often fight alongside the nobles.

In effect the social role of the retainer is somewhere between a servant and a sidekick. Like Don Quixote and Sancho Panza, Elric and Moonglum, Batman and Alfred, Jeeves and Wooster, or Henry V and Falstaff - a good retainer is a trusted accomplice. They may be the noble's best friend; there is often much rivalry and little friendship between nobles. They may even be lovers, although such a tryst is scandalous. In high society a retainer must do everything to ensure that the noble or nobles they serve receive the respect they are due - a role that begins by being respectful themselves. In less serious circumstances both parties may relax and assume a more informal relationship.

There can be a huge amount of fun in playing a low-status character, but it is important to be certain that it is something that you want to do. There is no need for any noble or noble house to be accompanied by a retainer, many are not, so the only reason to play one is if you think the role will be fun. A retainer is never likely to be the focus of the action at plots, the character is inherently more likely to assume a background role. What a good retainer character should be is busy, there should always be things to do; waiting on the nobility and arranging their business for them.