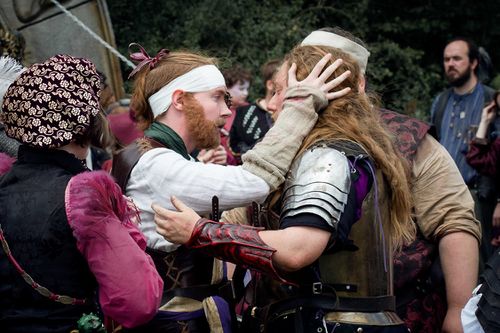 Love, in all its forms, is a powerful force throughout the world of Empire - and nowhere is this more true than in Dawn.

Love is a powerful force in the world of Empire, particularly in the nation of Dawn where it is widely recognised as a potent hearth magic. Many Dawnish see love as every bit as important as glory, and ofttimes just as dangerous. As with glory, the troubadours pen songs and stories about love - remembering it, celebrating it, and invoking its power.

Although romantic affection is the most common form of love that is immortalised in the troubadour's songs, glorious stories of platonic love are just as cherished. Likewise, tales of the bonds between siblings, parents and children, and the extraordinary deeds inspired by them form the basis of many popular ballads. What matters is the commitment to the ideal of love - or to demonstrations of true love - that are seen as uplifting and praiseworthy. The idea of giving your heart to another, to love them unconditionally, and to be prepared to sacrifice everything for them.

Some Dawnish folk consider love and glory more important even than the virtues while others claim that they are what gives rise to the virtues. Regardless, most Dawnish believe that true love serves a higher purpose, encouraging those who pursue it - or cherish it - to pledge themselves to the highest ideals of Dawnish life. To slay a dragon is glorious but it is more glorious still to do it for love. The tale of the First Empress is cited often by troubadours as a testament to the power of true love, claiming it was the love that Rodric bore the Empress that brought Dawn into the Empire.

What most Dawnish folk agree on is that true love can be different for different people. Just as the glory that a tourney knight seeks to win is different to that of the troubadour, the weaver or the enchanter, so each person will pursue their own vision of true love. Thus most folk are content not to worry overly-long about the nature of true love; instead and rather to encourage each person to set their own ideals and to commit to them utterly. 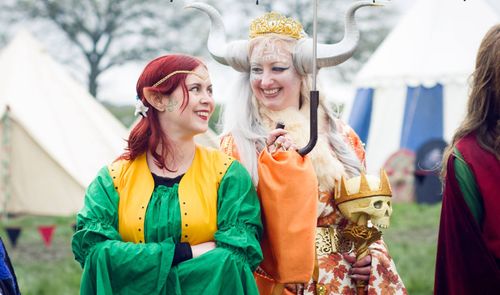 Flirtation is seen as an innocent pastime, no more serious than sparring.

Because the pursuit of love is so central, romance is a common part of everyday life in Dawn. The Dawnish pride themselves on their charm and good manners, they enjoy the act of courting for its own sake and many see eloquent flattery as an art-form. The arts of love; poetry, verse, music, dancing, and writing are all held in high esteem in Dawn with those who excel held up for high praise. Flirtation is commonplace and widely accepted; even among Dawnish folk who are married it is seen as an innocent pastime, akin to the search for love, the way that a knight's sparring is akin to the search for glory.

The pursuit of love is not confined to Dawnish nobles, life is simpler for yeofolk, but many of them treat the challenges of the heart with equal seriousness. Just as with glory, it is considered appropriate for everyone to nurture high expectations of love and there is no shame on yeofolk who imitate the ways of their betters.

But most Dawnish expect their nobility to pledge themselves to the high ideals of love, to treat the challenge of love as seriously as they would the pursuit of glory. The assumption is that nobility will woo the object of their affections, demonstrate their depths of their love with a test of ardour, and only thus win their heart. In Dawn the emotions of the heart are neither simple, nor safe; many a Dawnish noble has lost their life attempting to prove their ardour.

The noted League wit, Racine di Trivento, once famously remarked to the troubadour Elayne de Coome that it was "odd that Dawnish people place such importance on love given how bloody difficult they make it for themselves." Her retort was short and to the point; "nothing great without cost" she reminded the Sarvosan. According to the story, the voluble raconteur was rendered speechless for several minutes as he attempted to come up with a suitable response.

Slut-shaming The goal with the Dawn brief is to create an environment where people can play characters for whom a mythic ideal of true love, along with the associated ideas of premarital chastity and fidelity, is central. There is a huge desire to play with those ideas in Empire, and Dawn was created to give a space for people to play with that.

The clear risk with such an approach - and the reason the brief was updated - is that culturally such attitudes have gone hand-in-hand with ideas that people whose sexuality isn't constrained in that way should be shamed for being promiscuous. Slut-shaming is absolutely against our equality and diversity guidelines, it has no place in Empire, and this brief lays out that it is not acceptable to do that in Dawn.

The new brief makes clear that what Dawnish people think is vitally important is love and not sex. In Dawn, sex is only relevant in so far as it impacts on love. What Dawnish characters expect is that most people who are romantically inclined will want to seek true love - and that they will be absolutely faithful to that love. However they understand that other people make other choices - even Dawnish people - and they no longer criticise them for that.

Troubadours will argue until the sun rises about what exactly constitutes true love in matter of romance. Like glory it is difficult to define, an intangible idea that no two troubadours can agree on. Most though not all think it is all consuming, that you can only ever have one true love at a time. Some go further and claim that there is only one true love for you in all this world - some even claim that your true love endures beyond this life - that we are reborn to love the same souls endlessly.

The relaxed attitudes to sexuality on display in Navarr and other nations are far less common in Dawn. For a long time there was a view that sex was inseparable from romantic love and that everyone who sought true love should remain chaste until they achieved it. Recent events have changed this; Dawnish people now accept that sexual behaviour such as sexual fidelity or sexual consummation do not have to be indicators of the glorious path of love; it is reasonable even for some nobles to engage in sexual behaviour outside of the traditional structures of testing and noble marriage, if that is the route they choose.

However, despite these changes, the prevailing view remains that the affairs of the heart are complicated and impossible to control. That the passion of the blood can drive the passions of the heart and lead people to make choices they later regret. Dawnish stories are filled with utterly tragic tales of nobles who married in passion, only to discover their true love later in life. None of these tales end happily. Despite the importance that Dawnish folk place on the pursuit of love, despite the central role that romance plays in Dawnish life, or perhaps because of it - many Dawnish people are guarded with their heart and they choose to be careful with their physical affections as a result.

Crucially, the idea of one true love endures as the mythic ideal to which many Dawnish people choose to aspire. The notion of finding the one soul who you are destined to give yourself to completely remains a powerful attraction for many Dawnish folk. As a result the common approach is still for Dawnish folk to remain chaste until they are married - with the expectation that they will only ever enjoy conjugal relations with their spouse. The belief that drives this is not that there is anything inappropriate or unvirtuous about sex, but rather the desire to avoid the entanglements of the heart that are associated with sex until they are certain someone is their true love. 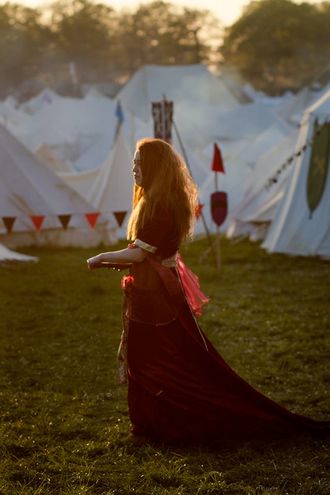 Love can be uplifting and glorious, but it can also end to tragedy and sorrow.

What has changed in recent times is that Dawnish people no longer rebuke others for their sexual activity. There is an understanding that the choice to remain chaste for marriage is exactly that - a choice. Those whose guiding ambition is not true love (and even in Dawn, not everyone cares for such things) or simply those who do not fear entanglements of the heart must make their own choices.

In the end the path to true love - like the path to glory - is unique for each individual that pursues it. Dawnish people are quick to celebrate those whose accomplishments impress them, but they avoid passing judgement on those who choose a different route.

That forbearance does do not apply to Dawnish nobles and even yeofolk who have visibly fallen short of the lofty ideals that those people set for themselves. Dawnish citizens don't judge others by the goals they have set for themselves - instead they judge their peers against the goals those people set for themselves. Someone who publicly commits themselves to a faithful life with their spouse - but who then falls short on that commitment will often face great hostility and censure from other nobles. Marital vows in particular, the oaths spoken at a wedding, create an obligation that a noble is expected to uphold at any price. Crucially, even in the situation where someone is being judged by their peers for falling short of the stated ideals of their love, a Dawnish person would not consider shaming them for their sexual behaviour, but rather for their hypocrisy, poor judgement or oath breaking.