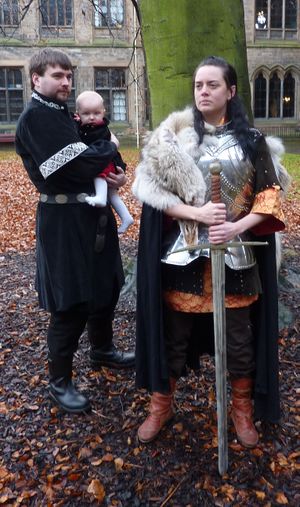 A Dawnish earl, her husband, and their child.

In Dawnish minds, marriage is a solemn expression of true love, an ancient ceremony that combines the potent hearth magic of love with the equally significant power of oaths. Nobles in particular are expected to hold themselves to the highest ideals and many of the most glorious tales from Dawnish history, such as the arrival of the First Empress, concern themselves with love, marriage, and the associated test of ardour.

To make sense of the unique Dawnish restrictions on marriage, it is essential to understand the nature of love in Dawn.

Between yeofolk, marriage is generally a matter of two individuals going before a noble and asking them to bless their union. All nobles have the right to bless a marriage, and in Dawn it is considered to have the same weight as a binding contract elsewhere. Both spouses must repeat their vows and then consent to the union verbally three times before two witnesses, but nothing else is required. If a priest is present, it is usually a troubadour who has been asked to help with the preparation of the vows and the wedding celebrations.

In theory a noble may marry a yeofolk, but the yeofolk is not ennobled by the marriage and such unions are rare and difficult as a result. Dalliances between the nobility and yeomanry are frowned upon; it is beneath the status of a noble to love one who has not proved themself. Tales of yeofolk inspired by love to pass the Test of Mettle are a common legend however.

There are no tests of ardour between yeofolk, but the quest for glory stirs every true Dawnish heart. As such, some yeofolk who are courted will demand that their suitor prove their devotion by tasking them to first complete some feat of glory. 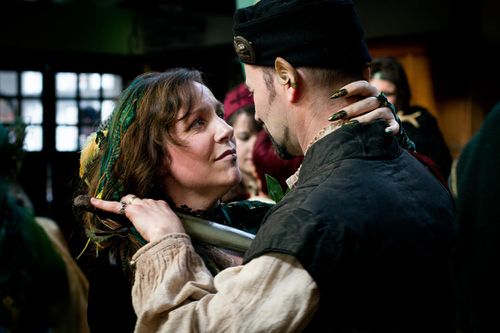 Relations between nobles and non-nobles, whether yeofolk or citizens of other nations, are fraught with difficulty.

Things are not so simple when nobles marry; one of the two must first pass the Test of Ardour to prove that they are consumed by true love and that they are worthy to join their intended's noble house. The suitor must pledge their troth to their intended. A request for marriage, like a request for a Test of Mettle, may not be refused (though an impossible and probably fatal test is the likely result if the feelings is not reciprocated). If the suitor succeeds then they marry their intended and become a member of their spouse's house.

Because of the unique nature of a Dawnish noble house, it is not acceptable for members of the same house to marry. There is a common taboo which forbids marriage between siblings in the Empire but the Dawnish extend this to members of the same house. This seems strange to outsiders but the Dawnish believe that the house is the family, that the relationship with an adopted brother or sister is more important that that between biological siblings.

Because of the restrictions, lovers who wish to wed must be members of different houses. Young lovers who have not yet taken their Test of Mettle must request a test from different houses to ensure this and then complete the Test of Ardour. This is considered wise by most Dawnish nobles - it prevents one of the parties completing their test and then pressurising their earl to set too easy a Test of Mettle for their paramour. Their intended must pass a test set by another earl, ensuring that their nobility is fully proven.

If two members of the same house fall in love the only way they can marry is for one to seek a Test of Mettle from another house. Traditionally a second Test of Mettle for a noble who has been thrown out of their house is impossibly difficult, but those whose requests are known to be motivated by love are sometimes not noticeably more difficult than a normal test. The Dawnish nobility well understand the affairs of the heart and do not punish people for seeking happiness. Of course the applicant must still pass a second Test of Mettle and then one of the two must complete a Test of Ardour. Such is the life of a Dawnish noble. 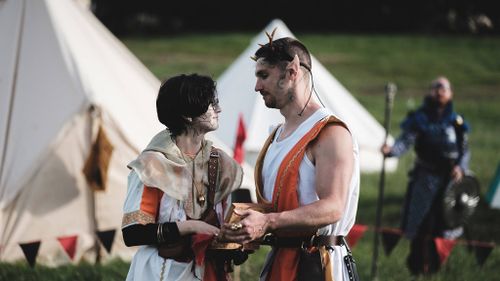 When Dawnish folk marry they swear passionate vows that form the basis for their marriage.

When Dawnish couples consider marriage, they agree vows that define their expectation for their union. Assuming that the Test of Ardour is passed (for nobles), or the approval of a noble secured (for yeofolk), these vows will be spoken aloud at their wedding and form the basis of the union. Dawnish vows are as different as the citizens themselves, couples agree their vows together, setting out what each expects of the other as the basis for their marriage.

A commitment to sexual and romantic monogamy is one of the most common vows adopted by most Dawnish couples who wed, but there are no set rules. What Dawnish society demands is fidelity to the sacred vows by which a couple weds, an unswerving commitment to hold true to them at any cost. This can often set an impossibly high standard, but such is the way of life in Dawn. A noble who has sworn to love no other, but who then permits even a flicker of romantic affection for another to enter their heart has committed a heinous offence, a profound violation of the ethics of love, an inglorious act that offends the sensibilities of all who become aware of it. Legends are filled with stories of couples who made uniquely demanding vows to each other, taking the opportunity to imbue their marriage with glory by pledging themselves to achieve some impossible feat together.

The language used in marriage vows in Dawn is expected to be uplifting, and to stir the passions of the heart. They are not legal texts intended to satisfy the clinical mind of an advocate. Skilled troubadours able to pen eloquent verse are often called on to help create the vows and sometimes to recite or perform them during the wedding. 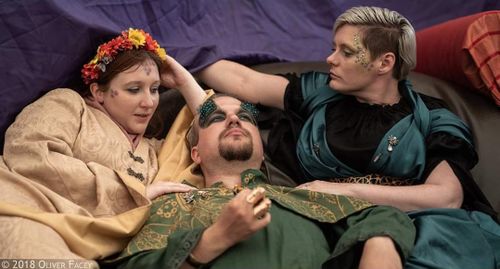 Polyamorous relationships and marriages are not uncommon in most parts of the Empire where they attract no more attention or interest than any other liaison. The situation is very different in Dawn where such unions are extremely rare, largely because of the cultural emphasis on the idea of true love in Dawn, and in particular with the idea that a person can have only one true love.

In practice there has been at least one notable exception; Queen Igraine was infamously polyandrous. Different troubadours tend to interpret the story of Queen Igraine, in different ways. As one of the greatest figures in Dawnish history, a woman whose glory was unrivalled in her lifetime, her extraordinary achievements gave her license often denied to others. Others say that the truth of Igraine's love - and that of the men who would become her husbands - was simply so apparent to the people of her time that it was inconceivable that any could speak out against it.

A more popular legend holds that not only did Igraine feel true love for all four of her husbands, and they for her - but that they consented to the arrangements for they also loved each other just as strongly. Other troubadours claim the opposite, that all of her husbands loved her so much that Igraine knew that picking any one would mean the others dying of a broken heart. Unable to cause such sorrow, she married them all, and in doing so promised her heart to none.

The facts about Queen Igraine are lost to history; all that remains is the troubadour's tales and the reality that polyamory is deeply scandalous for anyone whose glory falls short of the woman who raised the Castle of Thorns and created the first weaver cabals and her four husbands.

The idea of a simple legal divorce is not widely accepted by the nobility of Dawn. Nobles may separate and lead distinct lives, but they remain members of the same noble house and the expectation is that they will both continue to abide by the vows they publicly swore to each other on their marriage. To do otherwise brings the offending party into disrepute.

To be stripped of your noble status in this way is a terrible price to pay - but such is the seriousness with which the Dawnish view romance and love. What is sworn with oaths cannot be easily undone. The nobility of Dawn demand adherence to these highest ideals of nobility; those who want a simple life of pleasantries should remain yeofolk. The situation is much simpler for yeofolk, who can have a marriage dissolved by any noble of Dawn without recrimination.