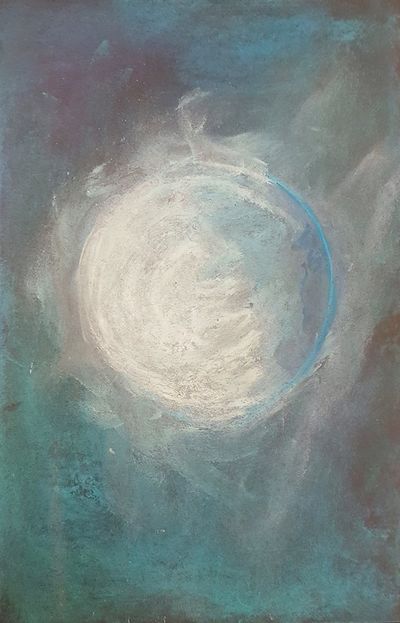 According to the eternals, Sinokenon is a word in an extinct language meaning 'Unity'; some texts refer to Sinokenon as "Unity" in another language.

It is the Apex and The Turning Mirror; sometimes it is called Throne of the Sun and at other times The Wheel of Light.

As with Leviathan, few mortals have actually seen Sinokenon directly. It is most usually encountered as a blinding light and a clear voice, sometimes male and sometimes female. Occasionally magicians have described encounters with a great turning mirror, a shimmering sphere or mass of rings that are in constant motion. Some even speak about encountering a metallic construct or a stern but calm man or woman, usually in the garb of Highguard, Urizen or Navarr, but most scholars believe these are encounters with mandarins acting on Sinokenon's behalf.

Most audiences are with the mandarins of Sinokenon, lesser eternals in their own right who are part of Sinokenon's hierarchical ministry. They often pursue their own agendas, and may send out their own heralds to deal with mortals.

Sinokenon has two main concerns; the creation and operation of hierarchies, and the concept of predictable change. It encourages others to band together, usually into hierarchical societies but not always. While Sinokenon likes defined hierarchies (and clearly believes they are the best social model), it encourages individuals to form communities and create something greater than the sum of the parts.

Loyalty fascinates it, and it believes that power and responsibility flow in both directions between individuals. The ideal hierarchy has leaders who are responsible to those they lead and those who in turn lead them. The ideal laws are those that encourage behaviour that supports society and shape behaviour, and that promote the good of the many over the needs of the few, or the one.

It also believes in slow change, the idea that things can approach an ideal state through steady progress. It promotes the idea that sudden change or change for its own sake is as damaging as stagnation. Perfection is a state that transcends stagnation - something that is ideal no longer needs to change, because it has reached its apex. Sinokenon is known to be fascinated by the Imperial faith and the idea of individual (and thus presumably societal) perfection through multiple reincarnations.

Sinokenon also encourages the idea that the future can be extrapolated from current or past events. By studying the way events unfold, it is possible to learn to predict what will happen in response to certain other events.

The Empire is of interest to Sinokenon because it sees in it an aspiration to create an ideal society. It is also known to be fascinated by several foreign nations, especially The Commonwealth and the Sumaah Republic.

Sinokenon is adept at creating bonds between individuals, and has special interest in covens, banners and other form of band. It seems to dislike temporary co-operation and instead prefers individuals to form groups of increasing size and complexity. It is known to be fascinated by the egregores, which serve as foci to help unite a large group of people. The Apex is also known to be able to slow or reverse transformations, but also to encourage changes that it considers help an individual move towards their ideal state.

On a more mundane level, Sinokenon has a great many agents and servitors that form part of its hierarchy. The mandarins are powerful in their own right, but it is also the Day eternal most likely to offer the assistance of eternal troops. It has access to a great deal of information as well, especially about societies, political structures and large-scale events. If it has a weakness it is that it is better at suggesting developments and outcomes in the future than discussing the causes and subtleties of events.