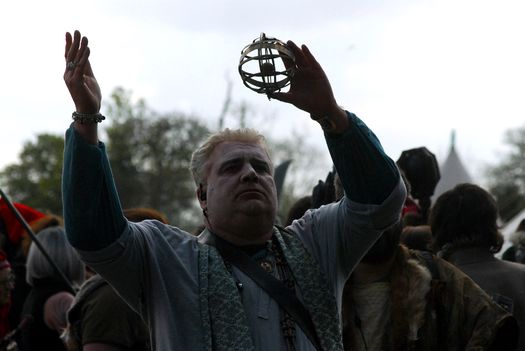 A Web of Celestial Attunement harmonizes the power of multiple covens, allowing them to cooperate on a single ritual.

This valuable item is usually crafted in the form of a sphere of dragonbone contained inside an orb of glass, crystal or metal and bound with an intricate web of orichalcum with shards of tempest jade at various carefully chosen junctions. It is infused with potent enchantments and attuned to the network of bonds and oaths between coven members. Many covens believe that the 'covenstone' is most powerful when it is allowed to 'align' itself with the magical interconnections of the coven that wields it, and may customarily meet up at least once a day to each handle the stone in turn for a few moments - often as part of another activity such as a meal or review of the day.

While the powers of the item are not excessive, Webs of Celestial Attunement have been used to perform some of the most powerful magics in the history of the Empire. For example, it is a matter of record that when Urizen magicians defeated the miasma of dread created by the volodny supporters of Alderei the Fair it was with the union of several covens using these items. Likewise, the initial magics used to lay out the pattern of the trods were performed through the cooperation of multiple Navarr covens. According to many historians, these items were developed in the time of Terunael, where their use was much more widespread.

The magic of a Web of Celestial Attunement mirrors that of the Volhov's Robe. It allows covens to co-operate without having to abandon their own oaths, or the structure of their own band. Even more potent is the ability for several covens attuned to a Web of Celestial Attunement to link together by using their covenstone on a single other target ritual group. The real difficulty in using these items comes in the human sphere - aligning different approaches to magic, discussing the details of how the ritual will be performed, and even agreeing on the actual ritual and what it will achieve are all obstacles that must be overcome before the true potence of the web can be unleashed.