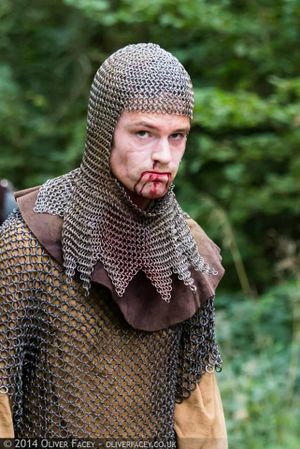 The dead, the maimed, the walking wounded.

Both sides involved in a campaign take casualties. This is represented by a reduction in their effective fighting strength.

Casualties represent fatalities, permanent damage to equipment and lost resources. Thanks to easy availability of magical, herbal and surgical healing, injured soldiers are generally restored to full fighting fitness within a short period of time, and are not counted as casualties.

Each side in a campaign normally inflicts casualties on the other side equal to one tenth of its fighting strength. The casualties are split among all the forces present in the territory based on the orders submitted by the commanders on both sides and the outcome of the campaign. The actions of player characters during time-in, particularly the outcome of skirmishes and battles, may also have an effect if that was part of the in-character brief. However the armies and navies of a side are assumed to stand and fight together, it is not possible to single out an enemy army.

A force that falls below 1,000 strength is disbanded. An army is routed, or annihilated, a navy is sunk. It is effectively destroyed and ceases to exist as a significant force although individual soldiers or vessels may survive. A large army disbands if its fighting strength falls below 1,500.

E.g. There are three full strength Dawnish armies fighting in the Barrens. They have a total fighting strength of 15,000 so they will inflict 1500 casualties on the opposing forces. The precise number of casualties may be adjusted due to the orders submitted and any appropriate rituals in place as well as any battles that have taken place.

The casualties are split equally between the enemy forces present and then the casualties each force incurs is adjusted based on the order submitted for that army or navy.

Resupply represents new equipment and materials, and new recruits to replace the dead. If an Imperial force spends the entire season in a territory controlled by its allies with no opposing forces there during the season then it automatically recovers 500 strength (750 for a large army or navy).

No natural resupply takes place if there is an enemy force defending or attacking any part of the territory. Forces leaving the territory at the start of the campaigning season do not count, but forces that enter the territory that season do.

Armies cannot resupply in a territory in which there is an ongoing damage effect such as Thunderous Tread of the Trees or Mountain Remembers Its Youth. This does not stop an army that has taken damage while moving through a territory from resupplying as long as they end their movement in a territory where no such effects are in place.

A force cannot be resupplied above its maximum fighting strength normally 5,000 (7,500 for a large force).

The Imperial Senate may pass a motion to authorize the use of mithril or weirwood - to speed up the resupply of an Imperial army or navy. In the case of an army, these materials represent weapons and armour as well as tents, wagons, siege equipment and other supplies. For a navy they include repairs to existing warships as well as new vessels, shipboard weapons, food and materials for the ships and their crews, and other supplies. This represents a concerted effort by the Empire to bring the target force back up to full strength. Emergency resupply, like natural resupply, takes a season to complete.

When a motion of emergency resupply passes, any imperial citizen may contribute resources and money towards the resupply of that army before the start of the next summit. A citizen who provides wains to resupply an army must also provide the appropriate amount of money at the same time.

In a single season, the first 20 wains of mithril or weirwood restore 25 army strength for each wain allocated. The next 20 wains provide an additional 20 army strength each, and so on up to a maximum of 100 wains in a single season. In addition to materials, emergency resupply costs 2 crowns per wain. The rate of emergency resupply resets each season so the mithril and weirwood spent in a subsequent season is not affected by earlier actions.

Following a decision of the Imperial Senate, it is the responsibility of the Senator (or other agent of the Senate, such as the Quartermaster General of the Imperial Armies) to call for a moment of silence honouring the dead after any motion for emergency resupply is passed. Unless the Senate imposes additional restrictions, a senator authorized to oversee the resupply of a specific Imperial army can do so freely for a year following the passage of the motion.