The orders are political bodies with clear philosophies about how magic should be used. They are made up of like-minded individuals and exist to bring together mages who share a common vision for how magic should be used in the Empire. There is no requirement for a magician to join an order, and many magicians involve themselves in the discussions of multiple orders.

Any individual present who is not a member of an order can still take part in Conclave business. They can still raise items to the agenda, participate in votes, and may speak during debates if they have the support of a grandmaster.

Each order also controls their own Conclave vault. The vault contains mana crystals and materials that are distributed by the Conclave to the order for their use. As the property of the order, responsibility for their distribution lies with the grandmaster of the order.

Any Imperial magician may join any order. To become a member requires the use of a simple magic ritual. Several civil servants associated with the Conclave have mastered this ritual and can perform it on an Imperial citizen at no additional cost beyond the crystal mana required. The ritual places an invisible mark on the target which can be revealed with detect magic and several other rituals.

During character creation, a character with the magician skill can join an order without needing to expend any crystal mana. A character who chooses not to take this option will need to join an order in play at the usual cost.

A magician can change order by replacing their Arcane Mark with the Arcane Mark of their new order. 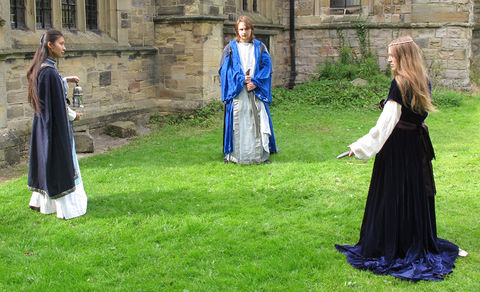 Powers of membership in an order

The number of members of an order attending Anvil determines precedence. The precedence of an order determines when they speak during a Conclave session, and what share of the Conclave resources they receive. Only members of the order who bear the order's Arcane Mark count for precedence. Precedence is determined by the civil service by performing a census of the arcane mark possessed by each magician attending the summit shortly before it begins.

Claiming to be in an order one is not a member of is considered electoral fraud. Any member of an order may request that another member prove their membership in the presence of a magistrate; in this case the onus is always on the challenger to provide the magic needed to examine the target's Arcane Mark.

At any time during the summit, a member of an order may challenge the grandmaster to try to remove them from their position. To do so, they must request a vote of no confidence with the Prefect of the Conclave (usually found in the Hub). An announcement of the challenge will be publicly displayed in the Hub and regularly updated with votes for and against the current grandmaster, as well as the current size of the order.

The challenge continues until the end of the summit (in which case it has failed) or until a majority of the order present at the summit cast either a vote of no confidence or a vote of confidence in their grandmaster. The threshold for a successful challenge is set by the precedence determined before the summit. A grandmaster can only be challenged once during each summit. A magician may change their vote at any time by informing the Prefect, however the challenge is successful and the grandmaster is immediately removed from their position if the threshold of votes of no confidence is reached.

If the challenge is successful, it is announced at the start of the next Conclave session. The order has no grandmaster during this session of the Conclave. An election for a new grandmaster occurs immediately afterwards, following all the normal rules for the appointment of a grandmaster.

As with other elections, it is not legal to vote against a grandmaster if you were eligible to vote in a different order's grandmaster election within the last year.

If any member of the order questions the eligibility of another voter then the Prefect will check that the magician bears the appropriate arcane mark using detect magic.

In the modern era, the following Orders are legally recognised as part of the Conclave:

Creation and Dissolution of an Order

New orders can be created, and existing orders dissolved, by a constitutional vote of the Senate. A newly created order requires a clear statement as to its purpose and attitudes to magic, and a symbol, similar to those possessed by existing orders, that is used with the Arcane Mark ritual. When an order is dissolved, the contents of its vault are redistributed among the remaining orders.