And I say to you, that whilst the vaults of Highguard, and the grain stores of the Marches, may store wealth, only the League can make it.

Avigliana di Sarvos was recognised as an Exemplar of Wisdom by the Synod in the year 76 YE, as she lay on her death bed. 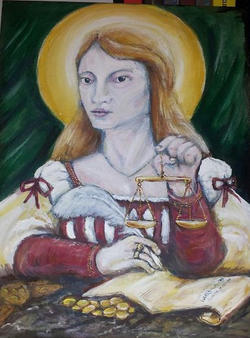 Avigliana was born in the city of Sarvos on the year that the Empire was founded. The daughter of a money-lender, Avigliana learned the accountant's trade, but had a grander vision.

When the first Empress died, she judged the situation wisely, and moved to Tassato in order to gain the ear of Emperor Giovanni.

Her work at the time was primarily on large-scale accounting, but many of the larger guilds were confined to the League by complex exchange rates and the lack of a shared currency. The idea of an Imperial currency was not a new one, but Avigliana was able to appeal to the Emperor on behalf of his home city, and also appeal to the Imperial Senate, to entrust the League with the creation of the single universal measure of the Empire's wealth.

Although she continued to work with the Imperial Mint, she used her influence to set up the School of Epistemology, to which she eventually retreated entirely, seen only by the students there. But her writing became prolific – pamphlets and letters would emerge from the school, bearing her seal, talking about subjects both mundane and esoteric.

These writings form the “Epistemologicon”, which is held, in coded form, by the school. A modern edition, “Excerpts from the Epistemologicon” is an ongoing project by the new master of the school, Niccolo Dos Tassatos.

The school continues to support the Empire – many diplomats are trained there, as are spies and cartographers, using a highly specialised approach that only the Path of Wisdom can offer.

The Assembly of Wisdom held that Avigliana demonstrated the following signs of being an Exemplar: