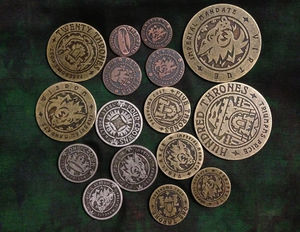 Imperial coins are minted in Tassato.

Imperial coins are minted at the Imperial Mint in Tassato. Coins are made of steel, rather than precious metal. Since the reign of Emperor Giovanni the Empire has operated a fiat currency with the value of all Imperial coins derived solely from their backing by Imperial law.

There are 20 rings to a crown and 8 crowns to a throne.

A ring generally represents a suitable payment for a minor task, or the cost of an item such as a simple meal or a bottle of wine or beer. Citizens who deal mostly in rings tend to be towards the bottom of the economic pile.

A crown is a more significant expenditure; a fine meal or a bottle of wine from a prestigious vinyard might cost a crown. Citizens who deal mostly in crowns tend to be wealthy - they are often business owners, or run a prosperous farm.

A throne is a serious expenditure; the movers and shakers of the Empire deal in thrones for preference. The Imperial Senate particularly deals in thrones. Anyone making transactions in thrones is considered to be among the richest people in the Empire. 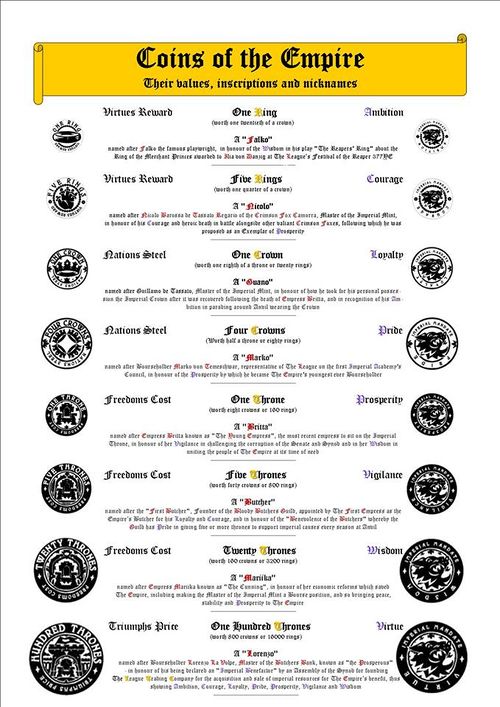 The Bloody Butcher's Bank guide to coins of the Empire,
including local slang names for the coins.

Prior to the foundation of the Empire, each nation used their own coinage, generally stamped from precious metals. Each nation had their own exchange rates based on the perceived value of the individual coins - although some coinage was stronger than others. The Freeborn silver moon for example was recognized by most of the nations that eventually became the Empire; likewise the Navarr copper thorn tended to be accepted wherever the early trods extended.

All these various currencies created a problem when the Empire was founded. The exemplar Avigliana di Sarvos convinced both The Throne and the Imperial Senate to pursue the idea of a unified currency. As a result, during the time of Emperor Giovanni the Empire spent six months negotiating with various representatives of the nations to introduce a representative currency based on stores of gold and silver. After Giovanni's death even this was abandoned in favour of the current fiat currency approach.

The design of the new coins was heavily influenced by the Imperial Synod. Many historical coins, especially the gold and silver runemarks used in much of Wintermark, were marked with runes such as Feresh and Pallas. The Synod successfully argued that such symbols were inappropriate, and the final design for the rings, crowns and thrones reflects this. Some priests, especially those of the assemblies of Pride and Prosperity see this as a great success by the early synod - every citizen of the Empire is reminded of the virtues every time they engage in even the simplest transaction.

Historical coins have no value within the Empire as currency, although they still occasionally turn up in treasure troves, ruins, and archaeological explorations. When they are recovered, they can sometimes be sold to collectors or museums (both Imperial and otherwise). If their silver or gold content is high, they might be sold to the Civil Service for imperial currency.

My dearest Elsbet, I must write with haste, for G. is even now preparing to present A's plan to the Freeborn and Marcher negotiators. We have the agreement of the mountains and the Northerners already, but these two are critical, otherwise the agonizing delays of the last six months will all have been for nothing. Everything hangs in the balance, but I am certain he will do it. I implore you to buy all the silver you can afford with all possible speed as soon as this winged messenger reaches you.

All Imperial services and functions are handled in imperial coins - foreign and barbarian coins are not legal tender within the Empire. Foreign visitors know this, and rarely bother to bring their own currencies with them - preferring instead wherever possible to draw on caches of Imperial money built up through trade.

While nations such as Faraden and the Iron Confederacy use their own unique coins, Profound Decisions does not produce these coins and they have no value in the Empire. Foreign nations know the Empire's dislike for using non-Imperial coins and will generally use rings, crowns and thrones for all transactions within the Empire.

The civil servants of the Imperial Bourse maintain stocks of the three valuable materials mithril, weirwood and white granite. Measured in wains, it is impractical to move these materials around too much or bring them to Anvil. Instead, the Bourse issues certificates that represent ownership of a wain of material. These are similar to bearer bonds - whoever has the bond can use it to collect a wain of the appropriate material from the Bourse.

Bourse certificates exist both to facilitate trade and construction within the Empire, and with foreign nations. These documents are carefully made to defy forgery; as such, they are accepted at face value not only throughout the Empire but by civilised foreign nations. An Asavean merchant or Jarmish magician-prince knows that their representatives can visit the Empire and claim mithril, weirwood or white granite in return for a Bourse certificate. Likewise, an Axou trader could arrange a deal with an Imperial citizen where they deposit some weirwood at Crown's Quay, receive a Bourse certificate, and transfer ownership to their contact simply and effectively.

Two attempts by the Senate to instruct the civil service to refuse to honour a cache of Bourse Certificates, (one presented by the Sumaah, another by the Grendel) have both been struck down as unconstitutional citing the Bourse "shall be free of all interference of the Senate".

Barter is often considered a little gauche, but is also extremely common between Imperial citizens. Ingots and measures of the various valuable materials, as well as the extremely valuable ilium, are weighed and valued by neutral Imperial assayers and have a standardized weight and purity - and thus value. The same is true of liao and herbs such as True Vervain - doses are prepared to a standardised purity and volume. This makes it much easier for Imperial citizens to exchange, sell, or buy these materials than for people in other nations; an Imperial trader knows that a certain amount of orichalcum will certainly be pure enough for the purpose they intend it for.