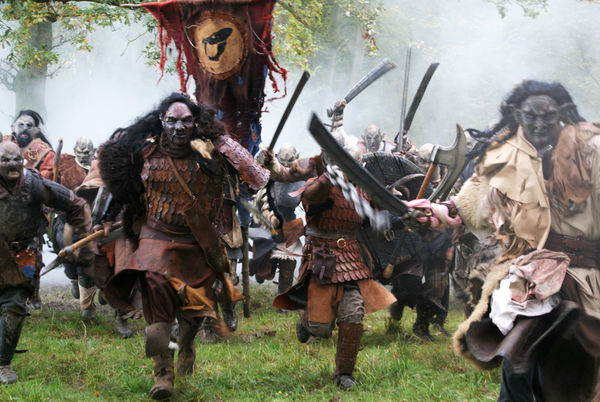 Barbarians are people that are not part of the Empire, that the Empire is currently at war with.

There are several distinct barbarian powers which represent hostile nations. The barbarians are designed to look cool in massive numbers in battles; to provide immersive, exciting and dramatic combat encounters; and to allow a range of interactions outside of combat. Most of the barbarian powers that currently surround the Empire are orcs.

Players are not able to play barbarian characters - by definition, they are not welcome on the playing field, however everyone has the opportunity to play a barbarian by volunteering to monster a battle or quest.

There are a large number of scattered groups of orcs, but two of the nations neighbouring the Empire are large enough that they are considered threats to the Empire.

Smaller groups of orcs are scattered across the Empire as bandits, or live outside its borders in numbers. The orcs of the hills between the Brass Coast and their foreign neighbours (Faraden and The Iron Confederacy) were a case in point.

The orc barbarians are not a monolithic threat - the nations may form temporary alliances, but they sometimes fight each other with as much ferocity as they show to the Empire.