"When they saw what I was, they attacked me, beat me senseless, punching and kicking me when I were down - and then the biggest of them split my skull open with four blows of his cudgel! Even that weren't enough for them - they wanted to see me dead, so they dragged me to the river and threw me in. I woulda drowned too - if not for my sister pulling me out."

The Marcher crowd stirred to the words of the passionate young Briar. At one side a pair of old Landskeepers stood shaking their heads, but the lad and his sister had gathered a large group. It was clear that the people he wanted to talk to were hanging on his words."

"Don't you see - we're all drowning here. Thems in charge are beating us all down. The Carstokes tried to murder me - just for being a Briar - because that's what them in power think of us. We have to stop letting them beat us down - we have to fight back!"

The lad's speech had attracted more than a few briars and several of them cheered the last, but it was clear that this talk of fighting back was upsetting the crowd. A few were looking around nervously as if worried that they might be seen here.

Before the lad could speak again a girl, dressed in Bolholt colours, but with the blazon of the militia stepped out of the crowd to challege him.

"Carstokes did this you say? Where's your proof?"

The crowd fell silent, watching the confrontation. The boy look surprised to be called out, but his face brightened half way between a smile and sneer - as if glad to be challenged. He pulled up his shirt and slowly revolved to show a body covered in Briar patches. The crowd gasped, the evidence of the Carstokes violence compounded by their fear of the Spring infection. He cast a triumphant look at the Bolholt girl, but she was clearly uncowed by his display

"It's a good story Tobin - or whatever you're calling yourself this week. But it can't have been the Carstokes who did this to you. Because two weeks ago, you were up at Tower March and that day you claimed it were the Trammels who did this to you. And if folk want to know why I've been following you round the March, it's because half a moon earlier you were in the market place five miles from my uncle's farm claiming it were the Bolholts did this to you. And funny thing is - your appearance matches a report from Anvil of a Briar there claiming that the Talbots beat him half to death and then tried to finish the job with a drowning."

The sneer fell from the boy's face like winter ice sliding off a spring roof. "Lies" he shouted, but his guilt was painted on his face like a Dawnish shield. "This ain't militia business - I've broken no laws."

At this the girl smiled as she renewed her assault. "Bruised apples have black cores. You're right that I can't arrest you for being a damn liar and I can't arrest you for being a dman fool. But being a thief is a different matter. Two nights ago, the Carstokes lost a young sheep from their farm, not from the fields by a wolf - but from the barn. But this morning I see you and your sister sharing a meal of prime mutton... So Briar Tobin - I am arresting you and her on suspicion of theft."

Afterwards nobody could quite agree on what exactly had happened next. A few witnesses at the front say the briar lept at the Bolholt girl with a knife, but the two landskeepers say it were the other way round - that the girl went for the briar with a knife in hand. Everyone agreed that amid the screaming and the panic it was difficult to be certain who stabbed who. What was certain is that Tobin and his sister had fled, and young Margary Bolholt, barely a citizen and still the youngest member of the militia at 15 was dead - stabbed twice, once in the ribs and a second in the neck. 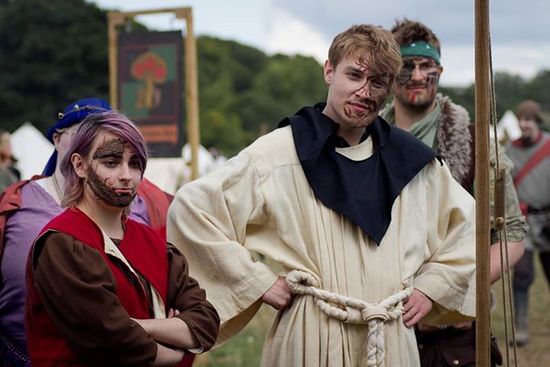 The briar agitator "Tobin" and the woman who may be his sister.

A young briar has been travelling the Marches making black claims of everyone with any connection to power in the Marches. He was tracked to Birchland and confronted there by a young member of the militia - but he killed the young woman and fled the scene. Magistrates have asked all law-abiding citizens to keep an eye out for the suspect and pass word to the militia as soon as possible.

Attempts to expose the falsehoods spouted by this ne'er-do-well have had mixed success. Those who accept his outrageous stories are being fed a palatable meal of wrongs left unrighted, of traditional bias. Worse, he couples his rhetoric with more subtle calls to "his people" to stick together and help each other to stand up for themselves against what he describes as an oppressive system dedicated to keeping them down. .

By himself, this young firebrand is only a small threat to the stability of the Marches. Unfortunately, the longer he remains at large, the more people will hear his poisonous lies, and the more dangerous he might become.

The Briar demagogue remains at large.