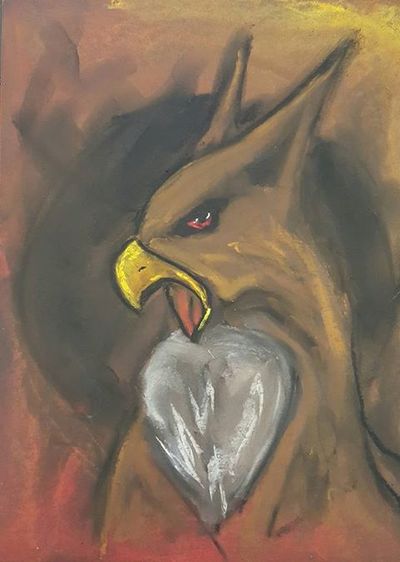 The gryphon-king is proud and ferocious, and few things escape his keen gaze.

He is also known variously as the Brother of Lions and the Hawk Lord.

Hayaak is a heavy-set masculine figure with a feathered brow. When he is in a warlike mood he wears a helm shaped like the head of an eagle, armour made from the thick hide of some monstrous lion, and gauntlets with clawed fingers; when he is calm, he wears fine gold and brown clothing in the style of a Dawnish Earl with a golden crown. He is rarely without his warhorn and his great two-handed axe.

Those who meet Hayaak are left in no doubt that this is a being with a quick temper; he has an aura that warns them of the danger of attracting his ire. Weak-willed individuals cannot meet his gaze, and must fight to stay in his presence if they think they have offended him.

The Gryphon-king has a well-known weakness; he enjoys and savours tales of romance, especially those that involve treachery and retribution. Some bards and troubadours have performed before Hayaak and received valuable gifts or boons when their work has pleased him, and occasionally painful curses when their work has bored or offended him.

Prior to his exile, he claimed the Forest of Arden as his demesne, at the heart of which stood his great castle. Since he lost the Forest to the treachery of Jaheris he has been an exile, allegedly living as the guest of Eleonaris on the Fields of Glory.

Relatively straightforward and bluff, Hayaak is passionate about questions of honour and revenge. He encourages those who consider themselves wronged to seek redress, but seems to lack a sense of justice. One stargazer described him as being "wildly disproportionate in his retribution; tread mud through his home and he will burn down your town to settle the score."

Hayaak is in exile: the eternal Jaheris has seized his demesne and made it his own. His servants are scattered - many have apparently shifted their allegiance to Jaheris, while others are dead or in hiding. Recent reports suggest that he has been given sanctuary by Eleonaris on the Fields of Glory.

Hayaak exemplifies the wrath that lies at the heart of the Summer Realm. When he is in a good mood, he is gregarious, regal and welcoming. His mood can shift quickly in response to a real or imagined slight, and while it is rare for him to become angry when he does he seeks to annihilate whatever has drawn his ire. He is often involved in conflicts with other Summer Eternals. It is suggested by scholars of the Summer realm that this exile and the treachery of Jaheris will not end well for anyone involved.

This moody Eternal is known for his Lion-bound horn that drives foes before it, and the one-handed spear Retribution that shatters the shields of his enemies and inflicts deadly wounds on their bodies - only a knight in full harness can hope to stand against Hayaak in battle - and he will sometimes offer a fraction of these powers to mortals. He can also fan the flames of wrath or vengeance in a mortal heart, helping to harden them for the retribution they feel they must take.

Many of Hayaak's court were knights and warriors, but since his exile that court is greatly diminished.