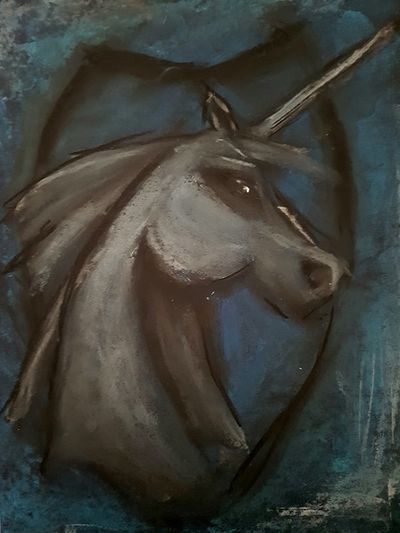 Silver and deep blue are the colours of Jaheris, the Unicorn Prince.

Jaheris is the Unicorn Prince, and the Lord of the Forest of Arden.

The Moonsilver Prince is usually clad in blue-and-silver, and appears with the horns of a stag. His device is a silver unicorn on a blue background. He has white hair, which has earned him the moniker Silverbrow.

The Lord of Despite is closely associated with the eternal Eleonaris. He is sometimes her rival, and sometimes her ally. In some stories he is her father whom she overthrew to claim her throne, in others he is her son who strives to usurp his mothers' seat. Sometimes it seems he is her beloved consort, but he always plots against her and is cast down. Sometimes he is her brother, who seeks to take her throne by force. In recent years, their relationship appears to have undergone a fundamental shift, and Jaheris has quit the Fields of Glory for the Forest of Arden, which he now rules as his own realm.

Until very recently, Jaheris had no realm of his own. Now, he rules over the Forest of Arden having claimed the demesne from the eternal Hayaak. According to rumour, the Forest has undergone a profound change under his stewardship. It seems to have become a significantly more dangerous place - the trees huddle together, and conspire with each other; the great boars, bears, and stags who once roamed there have been devoured by immense spiders which scuttled out from the mountains to the north; and feral unicorns now patrol the paths, hungry for the blood of intruders. Jaheris is said to have raised a pale white tower in the heart of the woods, tall enough that he can stand in the highest room and look out across his new domain - tall enough that he can see even to the edges of the Fields of Glory.

In addition to claiming the realm, Jaheris appears to have become the ruler of Hayaak's court. It seems only a fraction of Hayaak's servants have followed him into exile. Some have gone into hiding, others are likely to have been destroyed. Several heralds identified as serving the Hawk Lord have been encountered wearing the blue and silver of Jaheris. Those who have encountered them describe them as being more bitter, more spiteful, and more vengeful than before.

Jaheris appears to be filled with bitterness about his relationship with Eleonaris. Their armies and courtiers clash in open conflict - there is comparatively little scheming or plotting between them. Rather, their relationship seems to exemplify the clash of kings, the thrill of ambition, and the striving between powerful individuals to claim dominance over one-another and the world. Some key event appears to have shattered their relationship forever - scholars and students of the Summer realm agree that this seems to be a much more profound separation than any that has been seen before.

The new steward of the Forest of Arden seeks to draw others into his schemes. These schemes appear more steeped in bitterness and a desire for vengeance than before. Once, the enchanter Lydia de Courland wrote that: "Jaheris is treachery and ambition incarnate, but this is the Summer realm, not the Autumn realm; his schemes never succeed, and it may be that they never can. The only way he can ever usurp Eleonaris would be to become mightier, more noble, more powerful than she - and were that to happen I truly believe the only result would be that the two of them would swap roles. He would become the regal king of the Fields of Glory, and she would become the bitter rival scheming to steal his throne. In fact, I would not be surprised to discover that exactly that had happened before, perhaps many times. Indeed, it could well be that they are not two eternals at all, but one powerful magical spirit in two bodies." Now... the situation appears to have changed profoundly.

What boons Jaheris might offer now he appears to have laid claim to his own domain are not clear. It is likely he may provide boons that encourage revenge or ambition, but this is merely speculation.