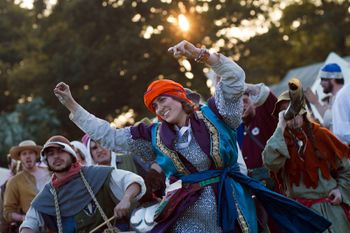 A Freeborn responds to 'Rough Music' attempting to shame them.

The idea of the honest life is held up as the ideal by those who cling to the oldest and most important Freeborn traditions. Legends claim that the three sisters left Highguard because they were frustrated by the hypocrisy of the Patricians, and so they swore to lead an honest life, speaking their minds openly without a care for politeness or subtlety. Those that traveled with them took up the vow; the name of the Brass Coast derives from this tradition, not the people who found it. It is literally the brazen coast, a land where the people strive to live their lives boldly and without guilt.

The sisters understood that the path of honesty is hard, so they encouraged those who joined them to see honesty as an ideal to aspire to, as something to achieve, rather than a state from which one might fall. Mendacious freeborn merchants who use their lies to trick others damage the reputation of the Brass Coast for honest dealing - they are dealt with harshly because the price of their deceit is paid by other Freeborn merchants. But no Freeborn expects to live every moment of their life in a state of grace, rather they see honesty as a goal that they should constantly aspire to, in everything they do.

In the Brass Coast, the ideal of honesty is not about discretion; the lack of lies that comes from omitting the truth is exactly the kind of hypocrisy that receives wide disdain in the Brass Coast. The sisters taught everyone to believe that it is precisely because real honesty is hard to achieve that everyone should strive to accomplish it openly and without shame. Hence comes the reputation for being brazen, for being shameless about your dealings, the goal is to be bold and forthright and unashamed of your actions. The Freeborn are "direct, notoriously frank and gloriously unabashed".

The Freeborn ideal of honesty should not be confused with "generosity" or "fairness". Freeborn merchants are expected to be honest, to represent their goods truthfully and to be faithful in their dealings with others. Many Freeborn scoff at the very idea of a "fair price" for things and point out that it is hard enough to be scrupulously honest without having to also strive to be "fair". Crucially honesty is an internal thing - every individual knows in their own soul if they spoke honestly and truthfully or not; but the idea of "fairness" is something dictated by others, it is not something any individual can know for themselves.

In fact many Freeborn merchants cheerfully reject any idea of a fair price. Freeborn scholars argue that those who talk of "fair" prices are actually trying to use shame to force the Freeborn to act against their own best interests. If the goods belong to you, then they are yours to sell, the only fair price is the one you choose to sell them at. But a powerful bargaining tool is argue that some higher authority exists that can dictate the true or fair price for something - and thus shame the merchant into lowering their prices to those that the customer demands. A key part of the Freeborn reputation for brazenness is their willingness to demand prices for their goods which are above this imagined "fair" price and to refuse to be shamed for doing so.

Did I charge him a fair price for the mithril Cardinal? That was a very long speech but I think was your only real question wasn't it?

Well I sincerely hope I did not sell him the mithril for a fair price!

I've no idea who should set this "fair" price of which you speak. Is it this august body? Have the Council of Nine given up advising our souls and taken up commerce instead? Perhaps all the merchants of the Empire should inquire of The Throne that we might know what the "fair" price to sell our goods should be. Can the Highborn magisters call up the soul of some long dead paragon to inform us? Or will our good civil service now issue us with tables of acceptable prices to charge? Who? Who will set your fair price?

What I charge Cardinal is an honest price - I make no bones of the profits I make, because I am not ashamed of them. And the current price is ten thrones a wain to any who asks. Well unless you are a member of this Inquisition... in which case the price for mithril is now twelve thrones a wain. And honestly?... that's because you've all wasted my time and I find you manipulative and self-serving.

Now if this body is quite finished, some of us have to work for a living.Joachim i Flaya i Riqueza, Master of the Brilliant Star

No-one in the Brass Coast cares about the white lies you tell the friends you like. The Freeborn ideal of honesty is about yourself and who you are - it's not about other people. If the customer you are haggling with tells you he has a starving family to support he is trying to manipulate you to get you to lower your prices... you can laugh in his face and tell him the price is unchanged. If they try to shame your senator on the enormous payments you took from the League to vote for their motion on a huge bridge to Holberg, laugh and tell them about the beautiful villa you plan to spend the money on. The essence of Freeborn honesty is about being bold and brazen about the things you do - it's not about other people. If someone asks you if their new trousers make their bum look fat, you can answer that question without having to look. Freeborn honesty is about laughing in the face of your peers when they try to shame you, it's not about trying to shame others.

Honesty is a clear handicap in a political game in which lots of your rivals will cheerfully lie to your face. One of the reasons to play the Brass Coast is because you find the idea of playing a character who is handicapped in this way appealing. Lying to people all the time is incredibly easy and live roleplaying games are no fun at all if they are too easy. By striving to be honest you can play the game on hard mode and have more fun!

But there are two ways that you can turn honesty into an advantage in play. The first is by rigorously policing your nation to punish those who seek to gain through duplicity. A reputation for probity is an advantage in business because it creates trust. People fear being over-charged, but not as much as they fear being robbed or cheated. If the Brass Coast is able to generate a reputation for honest dealings with each other and with characters from other nations then the benefits are small but tangible. Characters (not just merchants) who cheat those they deal with, selling them false goods, reneging on deals they have agreed, or the like damage the reputation of the whole nation, so be vigilant for anyone who is seeking to profit by squandering the honest reputation that the nation has generated and deal with them harshly.

Honesty can be a big advantage in another way - by giving you a core of resilience to resist the attempts of other characters in the game who will try to convince you that what you are doing is morally wrong. In Empire, like any social setting, people's actions are often curtailed by the risk of disapproval of those around them. Imperial citizens will tell you that it's wrong to sell your goods for a big profit, that it's wrong to take bribes, wrong to blackmail or bribe your rivals, etc. By enforcing their own ideals on your character, they force you to act the way they want you to... which you will find is often to the detriment of your character and your game.

The secret of life is honesty and fair dealing. If you can fake that, you've got it made.

To be Freeborn is to glory in shamelessness - to laugh in the face of those who try to shame you into doing what they want. It takes some confidence to brazen out your actions in the face of the criticism of others, but if you strive to achieve that as part of your character goals then it can help your character get ahead and help you have more fun at the event.