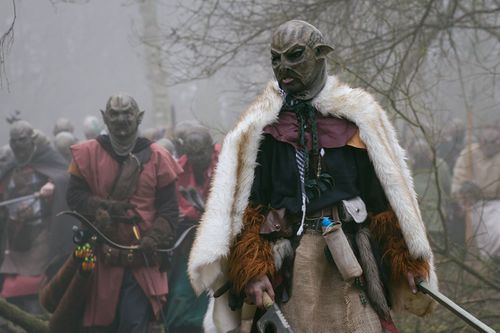 The Jotun value courage, strength and martial prowess above other attributes. They do not throw their own lives away, nor use the warriors of their subject nations as disposable troops, but they are invariably looking for a way to increase their honour, with an eye towards becoming ancestors when they die. The only true dishonour, most Jotun recognise is showing fear in the face of the enemy, or striking a worthy opponent down by treacherous means.

In battle, the Empire will usually encounter a mix of elite Jotun warriors and less skilled warriors drawn from the subject clans that are ruled by the Jotun. Where possible, we will try to field groups of Jotun warriors together, especially if they have similar costume, and then inter-space the line with bands of regular barbarians.

As with any barbarian role, PD will provide simple costume that you can use when monstering the Jotun. The following page provide an overview of how you can improve upon the basic barbarian breastplate and soft kit available.

Red is the traditional tribal colour of the Jotun, and warriors will try to wear at least one item that is red whenever possible, so that other Jotun recognize and respect them. The ideal shades are dark or blood red, but brighter reds work well for highlights, accessories or wraps.

The perfect Jotun garment is a thigh-length woollen tunic worn over trousers. These are worn by all Jotun and are usually in a dark base colour such as grey, dark green or brown or in a dark shade of red. In practice any dark coloured base garments are better than nothing as a starting point if you are volunteering to play a Jotun.

Jotun consider mail superior to plate armour. Most Jotun warriors will have a simple mail shirt, or a full length hauberk. This can be supplemented with plate on the forearms and lower limbs and sometimes around the shoulders. Plate does not form the majority of an elite Jotun warrior's armour in battle, instead it adds extra protection to vital areas and serves to add to the visual theme of heavily armoured warriors.

A light breastplate, such as the one represented by the PD injection moulded armour is considered inferior by Jotun warriors. This armour is still common in Jotun armies - but is usually worn by members of the Jotun subject clans rather than by elite Jotun warriors.

The axe is the favourite Jotun weapon, they consider it a more versatile weapon than a sword and believe it allows a stronger more skilled warrior to dominate his opponent. Most Jotun will wield a war axe with a shield, but many opt to wield a long handled axe with two hands. The Jotun also use other heavy hefted weapons like hammers and maces, where an axe is not available, and will employ swords as a last resort where no other weapon is available.

The Jotun avoid long spears and pikes, but younger Jotun warriors who are unable to afford the best armour will often favour a spear and shield in battle, taking advantage of their speed to make swift darting jabs at enemies foolish enough to leave themselves open to attack.

When it comes to ranged combat the Jotun prefer thrown axes or javelins. They do not tolerate crossbows on the battlefield, regarding them as dishonourable weapons that require neither skill or strength to use. They also tend to shy away from bows, However Jotun subject clans that do make use of bows as weapons of war are tolerated in the line.

Many Jotun carry shields into battle, paired with either an axe or short spear. They favour rounded shields, the style similar to those carried by the Steinr in Wintermark. These shields are mainly used to parry and block enemy blows with, allowing the warrior to fight aggressively. Rarely do they use them to form a strong wall of interlocking shields.

We will try to make sure we have enough red shield covers for round shields, so if you have a round shield it is worth bringing it with you even if it is highly distinct as we will hopefully be able to give you a cover for it. 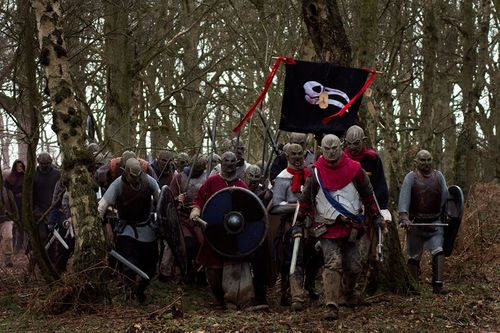 Red is often seen on their banners of war or incorporated into their costume in a totemic way. Even a small amount of red can make a big impact: a tabard or sash, scarf (to hide your human neck!), material belt or strips of cloth used as arm wraps or decoration on armour.

Fur trim, pelts and tokens made from teeth or bone are additional items that can be added to represent glorious kills a Jotun warrior has made whilst hunting. They consider powerful creatures such as dire lions, dire bears, dire boars and mandowla to be potent symbols of strength and might; many Jotun standards are topped with skulls of such animals.

Everyone who is volunteering to monster should turn-up wearing base costume and carrying a simple weapon if remotely possible. However if you are able to bring costume, weapons, and armour that are suitable for Jotun roles when monstering for a Jotun fight, then this is an enormous help in making the battle look as good as possible. In particular, we will try to assign volunteers to groups based on the kit they bring with them; players who have good Jotun kit will be assigned Jotun roles, those without will be assigned to play barbarian orcs from a Jotun subject clan.

Any of the following kit is ideal when volunteering for a skirmish or battle involving the Jotun.

If you are playing Empire, then some of your personal kit may be extremely useful whenever you are volunteering to monster. Imperial kit that is especially useful when volunteering for Jotun battles is covered below.

Mail is the obvious useful item, but parts of the soft kit for either of these nations could be invaluable when volunteering. Leather and fur trimmings and accessories work well for an elite Jotun warrior. Vambraces and greaves of any kind are also prized by the Jotun, but lamellar armour is rarely seen amongst the Jotun and is best left in camp.

The leather and well worn look of the Navarr works well for younger Jotun warriors, especially if combined with the traditional Navarr shield and spear. Units of lightly armoured Jotun warriors are highly mobile and daring on the battlefield, launching swift attacks against exposed enemy formations to sow discord and panic.

The lightly armoured look of the younger Jotun warrior might also suit players with Highguard Unconquered or Dawnish Yeomanry kit. In particular any leather or fur trimmings can easily be incorporated into a Jotun costume. As noted, mail is favoured by Jotun over plate but if you have plate then a good approach would be to focus using the items that cover the neck and arms, perhaps worn over a gambeson and combined with items of red fabric.

If you are playing an Imperial Orc then most of your costume is likely to be useful when volunteering. If you have layers of armour over chain, then consider just bringing your mail - this can be an opportunity to wear a bit less in battle! Imperial Orc kit is very distinctive, so if you are able to replace or supplement any elements with red fabric then this will help.

The Jotun have recently conquered the Lasambrians, a major clan of orcs located on the borders of the Brass Coast and bands of Lasambrian troops could appear on any Jotun battlefield. This means that Freeborn costume is surprisingly useful when volunteering for a large Jotun battle - as it will mean you can play a Lasambrian auxiliary on the field. Whilst the Lasambrians are not seaborne corsairs, but the plains and raiding themes of the Freeborn fit well here. Unlike the Jotun, the Lasambrian orcs also have a number of battle mages who use their magics directly against the enemy, so mage armour and implements are useful. Both soft kit base layers and Brass Coast armour would work well combined with orange tunics and sashes that PD can help provide.

The Jotun field very few magicians on the battlefield, but the Lasambrian forces include witches who are skilled at using magic in combat. Urizen base costume will work well for a Lasambrian when combined with PD costume. If you are playing a Freeborn or Urizen character and are own a suitable mage implement, then it is helpful if you can bring it with you when volunteering so we can cast you as a Lasambrian magician.