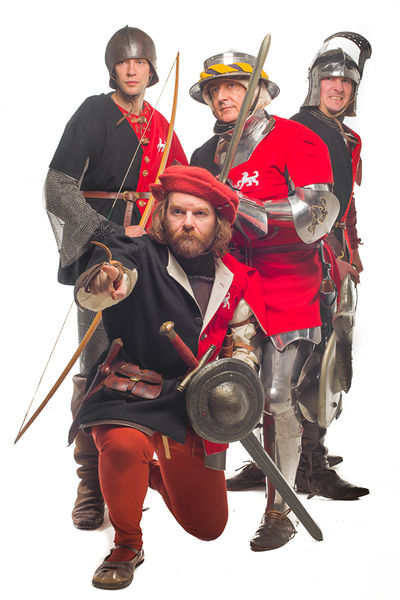 Costumes by the Midgard Seamstress

A Marcher household represents a group of yeomen, led by one of their number who is called a steward. Political power in the Marches rests in the hands of the households.

A household is the easiest kind of Marcher group to create. Even the smallest household's voice can count in the process of selecting the senator for their territory. The group leader will be its steward and is usually the most competent politician in the group rather than a battle leader.

The core of the group will be one or more yeomen. Some of these are likely to be military characters, but not necessarily heavily-armoured soldiers. A household's yeomen are just as likely to be lightly armoured, with bills, mattocks and bows. A household may also include the crafters who live on the household's land, often a smith, a friar or two. Most households also include a few beaters in their number.

You will want to choose a territory to come from: Upwold the oldest and hilliest, Bregasland home to the fen-dwellers, or rich, rolling, Mitwold.

Your group may also have originated from the Mourn, the territory now held by barbarians. It is important to be careful with your choice, as the Mourn does not have a senator, so if your group own lands here they will not be able to draw political power from them.

A short list of prominent Marcher households can be found on the Marches groups page.