Net of the Heavens

Net of the Heavens 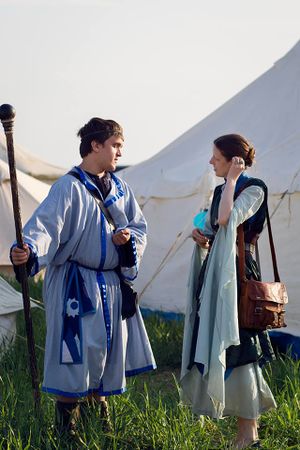 Pivotal people shape everything and everyone around them.

The philosophers of Urizen embrace an image they poetically call the Net of the Heavens. Like the Great Dance of the Navarr, this philosophy is a way to understand the world, the course of human interactions and human history. The Net of the Heavens defines creation as being made up of “nodes” or “knots” – pivotal people and events that shape everything around them. By identifying and acting on the most powerful nodes, an individual can ensure that their actions are effective out of all proportion to the effort expended.

Likewise the Paragons are some of the most pivotal individuals in history. They shape the world around themselves, and do so in a durable and far-reaching way. Their appearance is difficult or impossible to predict, which is unfortunate as influencing a Paragon would allow the Urizen to influence vast swathes of other people.

Events and moments can be pivotal, and a person may become pivotal for a while through a combination of time and space. The first meeting where the Empress outlined her idea for the Empire was a pivotal event, where dozens of influential nodes came together. Likewise, an individual may become pivotal for a few moments through their proximity to another node – Isaella, the soldier who assassinated Emperor Nicovar the Mad became absolutely pivotal as a result of that action, and her choice could have moved the entire Empire in a number of very different directions.

Not all nodes are equally influential or pivotal. An orc chieftan is a pivotal individual, for example, one that influences dozens of other individuals and events. Influencing the orc chieftan is often a much more effective way to deal with the army than open conflict. Those around them may also be important, but are usually less pivotal than the chieftain. Nodes are always connected to other nodes and many Urizen philosophers believe that it is possible to identify the most powerful node in a situation by following chains or strings of nodes backwards, looking for lines of influence to find the most significant node that unites them.

This philosophy is core to all areas of Urizen life, and identifying individuals, times and places where effort can be expended to enact massive changes is a constant drive. Implicit in the idea of the Net of the Heavens is a philosophy of life. The assumption is that to be effective, to demonstrate arete, individuals should seek to understand enough of the world that they can identify the nodes and work out how best to influence them. Part of arete is about avoiding wasted effort - the Net of the Heavens gives a philosophical basis for working out how to act and when. Together with poise the three ideas give the Urizen their reputation for serene calm; they remain focussed and patient, acting shrewdly and deliberately even when events around them are chaotic and in turmoil.