Robe of Blood and Bone

Robe of Blood and Bone 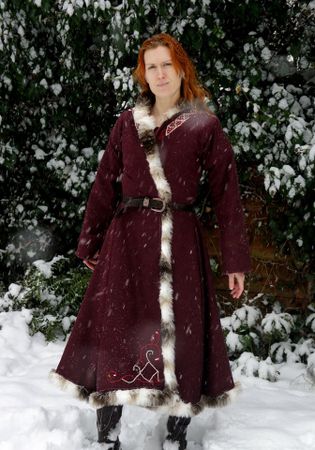 These robes are commonly red or white (or a combination of both). They are generally hard-wearing, intended to survive the rigours of the battlefield as well as the hospital. The weltsilver woven and ambergelt stiffened cloth the robs are made from is called trollsweave by the Winterfolk, leading the a common name for these items being Trollsweave Robes.

Being able to provide one of these robes is a sign of great skill among the Imperial orc bonesetters; it is not only a valuable tool for keeping the legion healthy, but it demonstrates their ability to acquire the necessary materials and commission such a powerful item. Imperial Orc magicians mark the robe with a thumbprint of their patient's blood every time its power is used, displaying its history and adding to its Worth. Even after the enchantment wears off, these robes are kept and marked with fingerprints to denote healing fuelled by the wearer's own mana and skill, and it is common for the robe to have the enchantment renewed several times if a legion can afford it. For instance, the Throatgouger Legion's robe is thought to have been made shortly after the Orc Rebellion and is now on its third layer of blood-prints.

When combined with a Woundbinder wand, the two items together are sometimes called the Warhealer's Regalia. They are occasionally produced as matching sets by artisans who specialise in healing equipment.

I’d been hit in the gut, real bad, and I was dying.

It’s sort of funny how life sort of slows down, like your mind is so dead set on not being dead that it takes in as much as possible, for as long as possible. The brigands had almost finished us off; only a few of Highbridge’s beaters were left.

Then they arrived. They didn’t so much as march, as flow. An orc legion, in full marching formation, somehow ending up at the same muddy brigand ambush that we had, only they come up once the trap’s been sprung.

Their vanguard swept into the brigands like the coast suddenly decides to take on the sea, but I wasn’t interested in them. I was more interested in my guts (that were all too interested in getting some fresh air), and the scariest darn orc I had ever, and still have, ever seen.

I didn’t even think it was an orc at first. I thought it was some Winter-born horror, come to collect the souls of the dead and dying, and it was coming to collect mine. It was just striding through the chaos of battle like it was born there, and there are two things I remember out of all of that turmoil more than anything else.

First, it was coming straight for me. Didn’t look left or right, didn’t even seem to care there was a fight going on. Right at me.

Second, was the coat it was wearing. All the other orcs I could see were walking metal, but this fellow was wearing some sort of long coat, all bound up in bone and ash and blood.

So this orc comes right at me, and I put my hand out, sort of like this; whether I was begging him for help or trying to ward him off I couldn’t tell you. He just grabs my hand, forms a fist of it with my thumb out, and dunks my thumb in my own guts.

Almost fainted with the pain, I did. Then, with a surprised; “Good!” (I think he’d thought I'd pass out too) he jams my bloody thumb onto the coat itself. Then he just says; “Your payment is deemed worthy”, and starts chanting.

By now, I’m beyond surprise, so when I started feeling better, I just let it happen. A few heartbeats later I’m standing, and that orc has moved on, looking for the next poor soul.

And I tell you what, since then, I’ve never worried about dying. Whatever fight I’m in, whomever I’m fighting, it doesn’t matter. Because thanks to that orc and his magic coat there’s a bit of me that’ll never fade.
Retrieved from "https://www.profounddecisions.co.uk/mediawiki-public/index.php?title=Robe_of_Blood_and_Bone&oldid=52524"