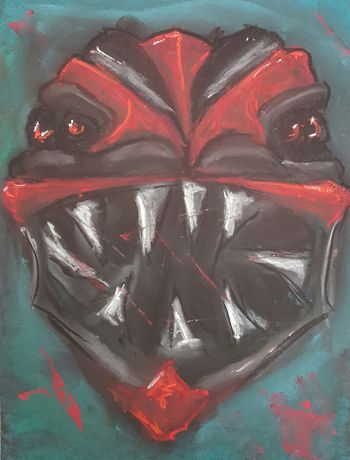 Maelstrom is the harbinger of violent, bloody destruction.

Siakha is largely unfamiliar to Imperial magicians. Among the Asaveans she is also known as the Maelstrom, the Empress of Sharks, and Schiuma Sanguinosa. The Grendel orcs call her the Salt-born Devourer and Mother of Wrecks. The Sarcophan call her the red squid and the maw of stone and she is treated with a combination of terror and awe.

Uncertain. It is believed that Siakha appears as an immense shark-like beast with crimson and black hide. All three of the nations known to have relations with Siakha also depict her as a churning maelstrom, whirlpool, or water spout that is simultaneously a gaping maw full of crushing, tearing teeth. The Grendel claim that Siakha is present in any feeding frenzy of sharks - several of the nations that live on the Broken Shore allegedly claim that sharks are her favoured children.

Siakha is unknown in the Empire. Her disdain for law and lust for blood leave her with little time for the people of civilised nations. Even before she was placed under enmity by then Archmage of Spring Rosamund Holt in Spring 381YE it was, and still is, unlikely she would ever seek any peaceful contact with representatives of the Empire. Much of what the Empire knows about her comes from discussions with Asavean, Sarcophan, and Grendel magicians. That said, there are rumours that certain Freeborn corsair families that have hidden shrines dedicated to idolatrous worship of the Empress of Sharks - although there are no records of such shrines ever being uncovered. 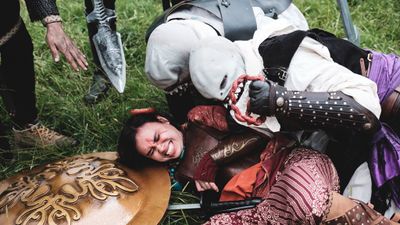 The heralds of Siakha are without mercy, having more in common with sharks than humans.

Siakha embodies destructive forces, especially those associated with the sea and the sky. She is said to revel in hurricanes, typhoon, devastating storms, tidal waves, and whirlpools. She also encourages piracy - Grendel orcs who draw on the boons of Siakha are known to be especially bloodthirsty, offering sacrifices of blood and flesh to the sharks that they say symbolise her endless hunger. It seems odd that an eternal of the Spring realm seemingly encourages something as sophisticated as piracy; Imperial scholars tentatively theorise that it is an element of predation and domination combined with her obvious marine connections. Some of the land-based nations of the Broken Shore are said to receive her boons when they engage in land-based raiding as well as piracy.

Siakha offers boons related to water, piracy, raiding, and destructive qualities of sea and storm. Magicians that enjoy her favour are said to gain power over rituals such as Foam and Spittle of the Furious Sea, Thunderous Deluge, Merciless Wrath of the Reaver, and Blood and Salt. Some foreign magicians report that Siakha also makes gifts of weapons to those who win her approval - brutal, savage weapons with supernatural ability to rend flesh, shatter bone and even occasionally splinter shields.