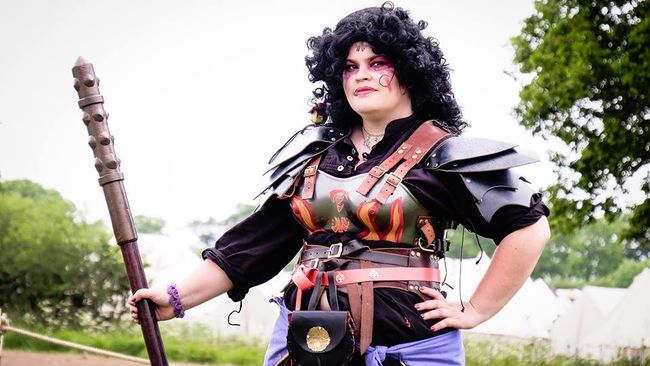 A Splintering Gorget is a popular item with some Winter mages.

A splintering gorget is a piece of ornate neck protection, often cunningly forged to resemble amberglass, or fashioned from volcanic obsidian with matching vambraces and greaves. orc warcasters, Suaq icewalkers and some Varushkan magicians fashion a similar arrangement out of bleached bones. In both cases, the armour tends to resemble splinters of glass or bone that radiate in a rough collar around the neck, over the chest and onto the shoulders.

It takes its name from the Freeborn belief in glass as a metaphor for the soul - by inflicting transient damage on one's own soul, one can splinter the soul of another. Wearers of this mage armour may be viewed with some suspicion by the sutannir, and priests of other nations who understand the metaphor, but there is no suggestion that the use of the splintering gorget actually damages the souls of anyone involved - it simply provides a powerful boost to the magic of the weakness incantation, allowing a magician to cast it without depleting their personal reserves as quickly as normal.

However, some wearers of this mage armour report odd dreams the night after they use it, dreams that seem to have little bearing on their own experiences or identity, as if they are dreaming someone else's dreams - as if splinters of their enemies' souls have become briefly embedded in their own through the reciprocal nature of the weakness spell.

Awoke in a sweat, the taste of battle still fresh on my lips. Leg appears to be healing well. Wish Calazzo was here with me. Terrible dreams last night, experiences so utterly foreign to my mind it is a wonder I slept and woke at all. Thought this might be normal for a first battle, but no-one else in the field hospital seems affected. Maybe it is the leg wound which pains me so. I will ask Ipadra in the morning.

Another day of battle, this time without injury. The barbarians press us relentlessly and we have lost many today. The dreams persist, so vivid and colourful but also utterly alien. I saw myself standing in the enemy camp barking orders at the orc troops, running for hours across unknown plains of high grass, the taste of blood on my lips. They are beginning to trouble me, but Ipadra says they are nothing to worry about, although given the horrific injuries she must attend to among the troops I know she is too busy to bother further with my questions.

Fighting was intense again today, we have begun to press home against the enemy. Returned to camp exhausted of mana and battle both. Beginning to wish I was back on the ship. Still, the dreams keep coming. I cannot believe my mind holds such horrors and am beginning to worry for the sanctity of my soul. Why am I dreaming that I am one with the enemy? Why am I hunting and celebrating in their wretched camps? I am so tired this morning that I am almost unable to move and have been confined to bed for the day with an unknown fever.

The first restful night of the campaign. Although dreams came and they were still of bloody war they felt closer to home, less alien. Ipadra sat next to my bed in the night to check upon me. This morning she explained why. The gorget I wear to aid in battle and spellcasting has affected my very soul, splintered shards of other, foreign mirrors which have pierced my being to the core. Ipadra explained that this happens rarely and in time I may learn to block these dreams out. In the meantime, she has offered me some noxious herbal concoction which may sooth my mind as I sleep so I will be able to join the fight again tomorrow. She also added that this is often taken as a sign of greatness and that the Hakima may show an interest in me should they hear of it. I expect that latter remark was designed just to make me feel better. It does not. Ipadra i Tatturo i Guerra, you are a much better physik than you are a liar.

Excerpt from a Mage's Diary, taken from a raid in Anozel
Retrieved from "https://www.profounddecisions.co.uk/mediawiki-public/index.php?title=Splintering_Gorget&oldid=81486"