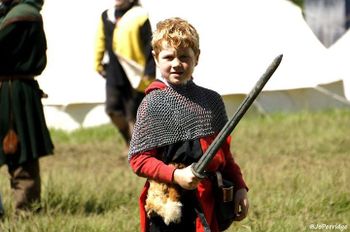 Squires who serve knights maintain their mentor's arms and armour. 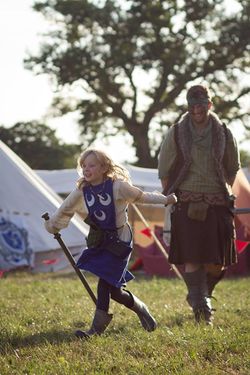 A squire is not a servant.

Children born into or adopted into a noble house are often given positions of responsibility as squires. A squire acts as an attendant to a noble, accompanying them to important meetings and social events, and is expected to be obedient to and respectful toward this mentor. The squire is not a servant, however, and is not routinely given menial tasks - the intention is that the squire should gain the character traits, knowledge and abilities that will prepare them for the Test of Mettle and for life as a noble. Tasks might include carrying messages, serving drinks at meetings, or assisting with other day to day tasks of a noble court. At the end of a task, the squire will often be asked what they have heard or learned during it, as this not only gives the noble a second pair of ears and eyes, but helps the squire to understand what they have witnessed.

Squires who serve knights also maintain their mentor's arms and armour (as much as their stature permits), and help the knight gird themself for battle. They accompany the knight to tactical briefings and battle planning sessions. Even the generals of the Nation are often accompanied by their squires, who must be thoughtful, discreet and willing to learn.

Older and trusted squires often gain their first experience of command in their mentor's service - traditionally, a senior squire is given command and responsibility for defending the national camp at festivals when the nobles sally out to do battle. They are supported and advised by senior retainers, knights and yeomen, but the duty is taken very seriously, and tales exist of squires who have won their spurs by valiantly defending the camp from unexpected attack.