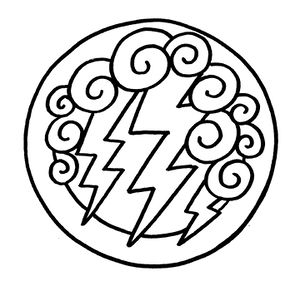 Shortly before the Summer solstice 380YE, while fighting the Jotun in the Mournwold, the soldiers of the Summer Storm experienced a profound moment of connection with a Jotun ancestor, Sjöfn of the Bittenblade. Apparently an ancient Jotun who appears unconcerned by the nature of the Imperial Orcs; her voice encourages them to fight heroically, gloriously, and revel in the clash of steel on the battlefield. (OOC Note: Any Imperial Orc who might have been present during that campaign can hear this ancestor if they wish; she encourages them to take actions that are in line with the five things of the Jotun.)

The Summer Sun is a large army, known for its ruthless commitment to the arts of war, and its indomitable fighting spirit.

The second Imperial orc General leads the Summer Storm, and is appointed (or re-appointed) at the Summer Solstice.

The Summer Sun is a large army, known for its ruthless commitment to the arts of war, and its indomitable fighting spirit.

This title is currently held by Zerk; it will be reelected at Summer Solstice 384YE. The table to the right shows the citizens who have been elected to hold the title of General of the Summer Storm in the years since Empress Britta died.