Vis (sometimes called quintessence, grym, or realm mana) is a substance not found naturally in the mortal world. Scholars agree that it serves a similar purpose for inhabitants of the realms as mana crystals do for mortal magicians.

Vis is an Old Asavean word meaning "power or force" and is recognisable in all modern nations. Traditional, educated magicians pronounce it "weeeez" while iconoclastic, younger magicians tend to pronounce it "viz" to the exasperation of the first group.

The practice of referring to vis as "quintessence" comes from extremely old texts, and the context has long since been forgotten. In Roget's "The Five Quintessences", that Urizen scholar tries to claim that it proves that fire crystals and prismatic ink are the same substance - but this has been largely discredited due to there being absolutely no evidence to support his wild claims.

The easiest way to acquire vis is to deal with an eternal of the appropriate realm. Over the centuries, various rituals have been created to allow commerce between mortal magicians and an eternal - the rituals Before the Throne of Estavus and Tribute to the Thrice-Cursed Court are examples which exist in Imperial lore.

There are six commonly-known forms of vis, each of which hails from a different realm.

Found in the Day realm, and used in the performance of Day magic. Over time, this miraculous pigment slowly changes colour from deep purple to cerulean blue, to vibrant green, to golden yellow, to fiery red and then back to deep purple. A single vial can be used in the same way as mundane ink to create images or documents in a beautiful range of colours. When it is used in the performance of a ritual it is often used to draw a map, write a message, or mixed with paints or coloured sands to trace designs.

This scarlet liquid comes from the Winter realm, and is used in the performance of Winter magic. It is usually found in small glass or crystal vials, or more rarely in earthen pots. It behaves in all ways like normal blood, apart from the fact that it is always warm to the touch, and liquid, as if it had just been spilled. Any magician can tell it apart from a normal phial of blood because if it is held by a living creature for more than a few moments they will feel it begin to pulse gently in time to their own heart beat. When it is used in the performance of a ritual, it is often drunk, smeared on the skin of the target, mixed with the blood of the ritualist (or another liquid), or simply spilled out onto the earth. The ritual Tribute to the Thrice-Cursed Court is a common way to acquire heart's blood.

This translucent gold, orange, or yellow substance comes from the Spring realm, and is used in the performance of Spring magic. It is soft and a little sticky, with a consistency that varies between that of of golden treacle and pliable amber. It is sweet and tasty when consumed, but most magicians caution against voluntarily eating a substance that comes from the volatile spring realm. It can be easily told apart from normal honey by its gentle, golden glow - and by the fact that it occasionally moves as if it were a living thing. When used in the performance of a ritual, it is often spilled out or mixed with hot water, or smeared on the target of the ritual.

This dark mineral comes from the Night realm and is used in the performance of Night magic. The crystals themselves vary in colour from a purple so deep it is almost black, through deep red to lustrous fiery orange. They are always warm to the touch, and often glow slightly like banked embers. When their magic is used, they become dull and lifeless and quickly crumble into inert ash. The eternals of the Night realm claim they are nothing more than the flames of a camp fire or bondfire made solid, although a few claim they are actually crystallized starlight. When used in the performance of a ritual, they are sometimes burnt in mundane fire, or rubbed and caressed to draw on the power trapped within them.

These magical fruit hail from the Summer realm and are used in the performance of Summer magic. They appear as apples with golden skin, and on the rare occasion they are eaten they taste delicious - they are almost the platonic ideal of fresh summer fruit given form. Sometimes called sun apples, they are also known as the apples of Meraud - that Summer eternal is said to own great orchards that produce bushels of golden apples to use in his magic or to offer as gifts to friends. Regardless, they are found throughout the Summer realm from the glaciers of Cathan Canae to the Fields of Glory. When used in the performance of a ritual, they may be consumed or cast to the ground as their magic is used - once their power has been exhausted they quickly lose their lustrous sheen.

Sometimes called Ashes of Estavus, this industrial byproduct comes from the Autumn realm and is used in the performance of Autumn magic. A pouch of ashes is easily distinguished from mundane material because it is always warm to the touch, losing this warmth only when its magic has been depleted. The most common way to get hold of the ashes is through the ritual Before the Throne of Estavus, but all Autumn eternals are known to have access to the substance. When used in the performance of a ritual, it is often thrown into the air, or used to trace a design on the ground, or more rarely mixed with water and used to paint runes or symbols on the target of the ritual.

Vis is rarely found in other forms - such as seed pods bursting with spring mana, or frozen lumps of rock and ice infused with the power of Winter. Such items are often of unique provenance, and may be significantly more potent than the traditional forms of vis but they follow the same rules (that is, no matter how much vis they supply they are used up entirely during a single ritual performance).

(When vis is found in other forms, it is almost always presented as a one-shot ribboned item)

Standard vis counts as three individual mana crystals towards the performance of a single ritual of the appropriate realm. It cannot be used for spellcasting. Vis can be freely combined with crystal mana in the performance of a single ritual. All the vis is consumed in a ritual regardless of how much mana is needed - but the vis may be split between multiple contributors if desired. The normal rules limiting the number of mana crystals that you can use to perform a ritual apply. For example, if a magician with two ranks of spring lore works with a covenmate who has one rank of Spring lore, a single jar of vital honey can be used by both of them to provide all the mana for their ritual.

Note that despite its similarities, vis is not the same as crystal mana. You cannot make an arcane projection using them; you cannot employ vis in conjunction with a Crystaltender's Vestment; and you cannot use them to speak before the Conclave or to place an item on the agenda, for example. 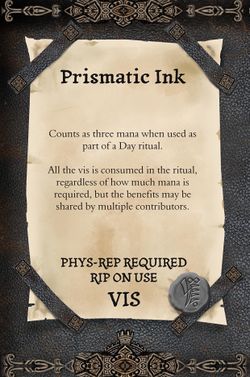 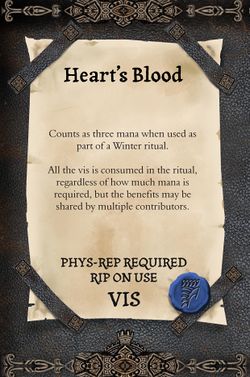 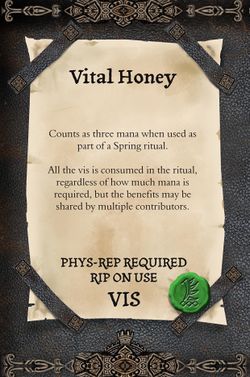 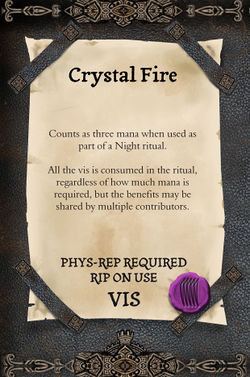 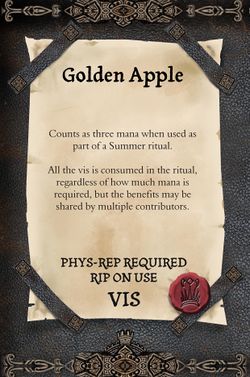 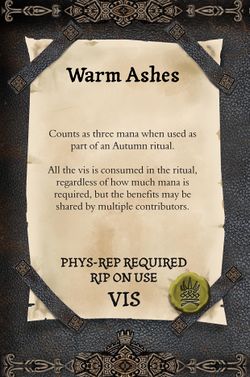