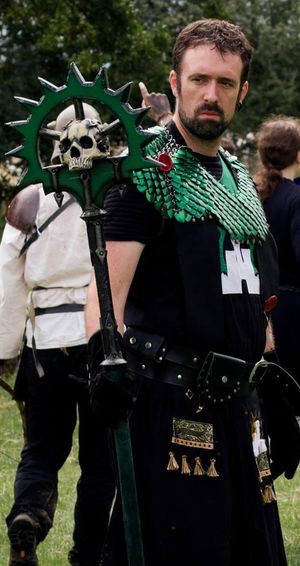 These staffs often bear grim reminders of the fate that awaits all mortals.

These staves are usually made of dark pinewood, or carefully shaped and sanded oak bleached white. They are soaked and cleaned in a weak solution of beggar's lye, and carved with runes such as Kyrop and Lann. Many bear staring faces, skulls, or in the Marches the appearance of carrion creatures such as rats and crows. They are usually unsettling things to look upon.

They are sometimes called a Draughir's Bargain. Both names mean roughly the same thing - a bargain where both parties are weakened or harmed, but one of the parties is capable of enduring or mastering the pain or debilitation to the detriment of the other party. In the hours after bonding to this staff, some wielders seem overcome by a sense of paranoia or become dismissive of hardship. Generally these feelings wear off, though occasionally bonding to this staff has tipped Draughir into madness.

Casimir stepped out of the tavern into the city night, groaning momentarily as his eyes adjusted to the darkness and his thin, bedraggled frame rebelled against the chill air. Grumbling to himself, he leant heavily on his staff before lurching forward from the doorway into the cobbled street ahead. Vendors called out to him from various doorways, hawking sweet-smelling treats to delight his senses but he ignored them all. He just wanted to get back to the inn and get a good nights sleep before heading on in the morning.

It wasn't long before he realised that he had made a wrong turn and cursed himself for not paying more attention. Turning round to the alley entrance, he saw it blocked by three shadows, long and thin on the ground but less impressive in silhouette. Damnable guttersnipes, presumably. He grasped his staff tightly and walked forward in confidence. Damned if these rotten urchins were going to get the better of him.

One of them stepped forward, a meagre knife glittering in his outstretched hand, while the others flanked him.

“Hand over your goods, old man, and we'll let you live”. The kid was unwavering in his speech and Casimir wondered how many times the three had robbed others before. Never mind, this would be the last.

“And what if I don't?” rasped Casimir, feigning an air of decrepitude beyond even his advanced years. The robber paused for a moment, No doubt he wasn't used to being answered back to.

“Reckon you can take us all on, do you? I don't fancy your chances.”

Casimir began chanting and pointed his staff at one of the two followers.

Divide and conquer, he thought.

This wasn't magic he was using – not yet - just some impressive sounding words which usually worked to drive off the uninitiated. True to form, the wretch took to heel almost immediately.

The second follower began to falter in his advance and spoke to the lead urchin. “Nathan, we picked a wrong one here. This one's magic! Let's get out and find some easier pickings over on Southside!”

The leader didn't budge, even when his second henchman turned tail and skittered off, leaving him alone.

And then there was one.

Casimir resumed his chant, low and menacing; but this time there was meaning to the words, and mana woven into the pauses.

“You won't fool or scare me so easily, old man!” Nathan ran forward and tried to get in close to use his knife but even with Casimir's reflexes he was too slow. The bleached tip of the old man's oak staff hit Nathan squarely on the knee, knocking him flat in the mud.

Now we're equal. Not so confident now, are we?

Nathan was still quicker though, and rolled to one side before standing up and squaring off against Casimir, his eyes stinging with embarrassment and hatred. He summoned all his strength to teach this old, unarmoured man a lesson ...

... But the strength didn't come. Afraid, unsure what other tricks the old man had up his sleeve, he ran off into the night with one last hateful look back and a threat on his lips..

Casimir took a deep breath and continued on his journey. There may not have been a spring in his step, but there was a smile on his lips.