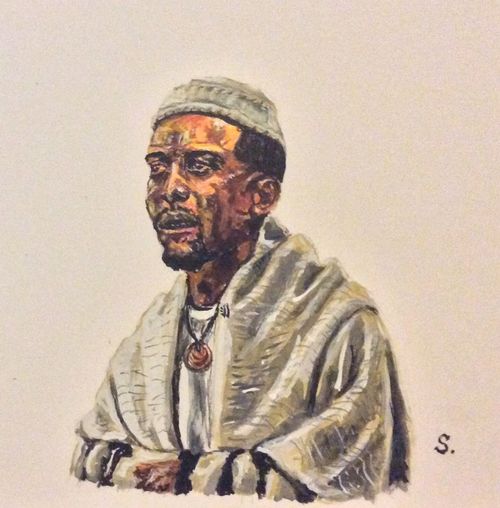 Paragon of Ambition, who founded a great nation.

Atuman was the brother of Atun, and one of the Twin Navigators of Highborn legend. The stories say that it was Atuman who was the motivating force behind the exodus that brought the early Highborn to the shores of the Bay of Catazar. His ambition to provide a safe homeland for his people not only created the nation of Highguard but by extension the Brass Coast, the League, and the Empire itself. Indeed, there is some evidence that Atuman was mentioned by both the Founders during their exodus to the west, and by Aldones di Sarvos in his discussions with Merchant Prince Barrell of Tassato and Maria Ivanova, Boyar of Temeschwar - making it doubly ironic that Aldones would be partially responsible for Atuman losing his status of paragon.

Accounts of Atuman describe him as "ebon haired, with a proud profile, and eyes of fire." All accounts depict him as a powerful orator - a man whose passion could charm a storm as easily as it swayed his enemies to his side. When his sister spoke of a terrible fate that would befall their people, it was he who brought together all who would listen and persuaded them on the dangerous course of fleeing their beleaguered homeland and seeking to found a new nation. The early histories of the Highborn are adamant that many of those who followed Atuman and Atun on their flight were enemies, and that it was Atuman's charisma that helped them to put aside their differences and work together so that all could prosper.

Atuman founded the city of Pharos at the mouth of the river Couros, and became effectively the king of Highguard, although Highborn historians agree he never used that name and refused to take a crown when the patricians offered it to him. His daughter Acenath took the title Navigator after his death in his honour, and raised a great tomb for him on the cliffs overlooking the Bay. He designed the tomb himself, and laid the foundation stone with his own hands. On his deathbed, he told Acenath that his reasons for wishing to be interred on the headland were threefold: he wished to be able to look out across the sea to the homeland he had left behind in his youth; to watch for any danger that might come from the sea to threaten his people; and so that if his beloved sister ever returned from across the sundering sea, he would be the first to see her - and the first thing she would see would be him, waiting for her.

During the Turmoil, several supporters of Permion the Lawmaker - including one of his surviving daughters - sought sanctuary in the tomb during the burning of Pharos. Even the supporters of the bloodthirsty patricians would not defile the sanctity of that place. There is a story, almost certainly apocryphal, that when a dark-hearted soldier of the patricians sought to spill blood in the tomb her sword shattered and she was struck blind, terrifying her fellows and causing them to flee the area. The tale is considered mildly heretical by orthodox Highborn priests, but this did nothing to reduce its popularity - or the idea that even in death, from beyond the Labyrinth, Atuman sought to protect his people.

After the civil war, the Assembly of the Virtuous elected to turn the ruins of Pharos into the Necropolis, and built a new capital further north in Bastion. The Tomb of Atuman still stands on the cliffs overlooking the sea.

While Atuman has never proved as popular a figure in the Empire as his twin, he is still held as an inspiration by followers of the Way. Many Navarr point to him as an example of someone with an instinctive understanding of the Great Dance. When his people and his home were threatened, he chose to move and find somewhere better to make a new home. Some Navarr writings refer to him as The Unbranded Brand and used his stories as a way to build stronger ties between the pre-Imperial Navarr and the Highborn. In the League, he is overshadowed by Aldones but even there the priests patiently point out that one of the motive forces behind the foundation of their nation himself pointed to Atuman as an inspiration - and was literally the man himself reborn to continue to work of building powerful nations. In Wintermark Atuman is seen as a heroic figure - a passionate leader who brought his family and his people through a terrible exodus to found a nation that has endured for seven centuries. Some Thanes, especially among the Steinr, see in the stories of Atuman an all-too-human leader who never stopped striving to secure the safety and prosperity of his people - even when his people were squabbling among themselves like spoiled children.

It is unfortunate that his greatest achievements - bringing the Highborn to their new home, founding their nation, and building the great city of Pharos on the shores of the Bay of Catazar - are today overshadowed by the politics of the early Synod. Historians can only speculate about the events leading to the General Assembly refuting his paragonhood. Aldones di Sarvos is said to have repeatedly denied that his vision meant that Atuman was not a paragon, but the Synod did not agree. The Doctrines of the Faith say that "A truly Virtuous Spirit, one who is a paragon of Virtue, is capable of freeing itself from the Labyrinth of Ages through transcendence. If Aldones di Sarvos was Atuman reborn, then his spirit could not have freed itself from the Labyrinth, and thus he could not have been a paragon.

There is some evidence that there was more than simply doctrinal disagreement at work in the Synod. Some stories suggest that some of the priests of the other nations had grown weary of what they saw as the presumption of the Highborn Assembly - not only in their role in the Synod. There are certainly stories that speak of the "arrogant" attitude of the Highborn - that because the First Empress was Highborn, the Empire had ultimately been founded by their people. As the acknowledged founder of Highguard, Atuman was sometimes described as the ultimate founder of the Empire. The truth will probably never be known, but the belief in a conspiracy of early Imperial priests to "shame" Highguard by "dethroning" Atuman has waxed and waned in popularity for the last three hundred and fifty years.

Atuman's tomb still stands on the cliffs overlooking the Bay of Catazar, watching eternally for the return of his beloved sister.