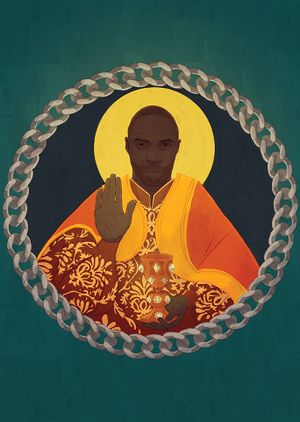 Paragon of Ambition, founder of the League.

Aldones di Sarvos is both the founder of the League and a paragon of Ambition. According to legend he began life as an orphan before becoming the most powerful merchant prince of the city of Sarvos. As one of the earliest supporters of the First Empress and one of the richest individuals in the world at that time, his silver flowed everywhere the Empress and her troops went. Early on, Aldones recognised a clear problem; while he and his fellow Sarvossians considered themselves the most civilised people in the world, a single city could not compare with the power of the nations that were drawn to the Empress' banner.

Demonstrating his great vision and pragmatism when it came to achieving his goals, he met with his fiercest rival, the Merchant Prince Barrell of Tassato, and with Maria Ivanova, Boyar of Temeschwar. He introduced them to the Empress, and together they persuaded the two that their future lay with the Empire. In private meetings following the more public meeting with the Empress, Aldones convinced the other two that as the greatest cities of the world, they had more in common with each other than with the nations that surrounded them. He persuaded them to join together into a single League and thereby create an entirely new nation.

Several years after the foundation of the Empire, Aldones took True Liao. He received a potent vision of which he would not speak but the priest he had a chosen to accompany him, Bishop Catertina de Sarvos, indiscreetly revealed the truth of the matter; Aldones had received a vision of having been the Highborn cultural hero, Atuman the Navigator. This caused an immediate uproar in the Synod, because they argued that it made it impossible for Atuman himself to have attained paragonhood.

The political furore that ensued badly damaged Aldones' plans but grudgingly the Synod were forced to agree that Atuman must have been an exemplar, and accept that Aldones was at least as virtuous as the founder of Highguard - both had created new nations out of nothing. For the rest of his life, Aldones attempted to downplay this revelation as much as he could - he took no pleasure in it, and stated several times that the revelation of the true liao had been "a tree that bore only bitter fruit" and that he "had aimed for sky but hit the sun".

He disappeared from history shortly after a keynote speech to the newly-united League. Some maintain that he transcended at the defining moment of his greatest success. Others maintain that he simply stepped back into the shadows, refusing to become a figurehead for his new nation, and continued to observe the League from behind the scenes. Historians and theologians are divided on the matter.

His private life is largely a closed book, but he is often quoted as saying "surround yourself with exceptional people, and make them love you." His cadre of friends, allies and supporters are often seen as the blueprint for the guilds that form the basis of League society. The son of his fiercest rival, later one of his closest friends, Giovanni di Tassato, went on to succeed the First Empress to the Imperial Throne, and claimed several times that he was inspired to make the sweeping reforms he enacted by the example of Aldones.

For many followers of the Way Aldones represents an aspiration to be "all that you can be." Historical reports say he never stopped trying to improve himself, and by doing so inspired those around him to do the same. The list of his many accomplishments appears excessive - he was recognised as a skilled swordsman, general, poet, painter, sculptor, actor, economic theorist, playwright and politican who demonstrated extensive education in history and the arts. He famously said that "talent is no substitute for hard work", and spent most of his spare time training his body or studying to improve his mind. 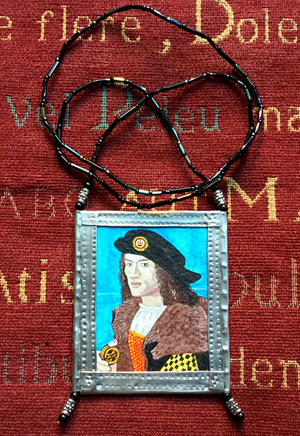 Some ambitious individuals keep icons of Aldones close at hand
to inspire them.

The Assembly of Ambition cited the following signs as proof that Aldones was a paragon.

Aldones is a paragon of Ambition whose actions changed the world.

Aldones' physical ascension is sometimes contested by theologians and historians. As Emperor Frederick himself wrote "the man is remarkable enough without needing to tack on the suggestion that he was somehow spirited away from the mortal world at the height of his triumph!" There are nearly as many theories among such scholars about what actually happened to Aldones after his apparent disappearance as there are scholars interested in the matter.

Aldones' inspirational tomb is empty. Built in Sarvos thirty years after his disappearance, the tomb is at the top of a tall tower on the northern side of the city. An empty chamber at the top of the tower is surrounded by arches that open out onto a circular balcony. Pilgrims can look out across the city of Sarvos, and north towards Temeschwar, Tassato, and Holberg. Understated as it is, the vantage point coupled with the potent consecration laid across the top of the tower creates a profoundly moving experience.

Built in 28YE with the assistance of the Custodes Clavium, the basilica of Aldones stands in the White City of Bastion. It is one of the tallest structures in the city, with three great spires reaching over two hundred feet into the sky. Each spire is surmounted by a massive bell that rings every hour, as marked by the Grand Clocktower in Holberg. Four large stained glass windows dominate the interior, each one depicting one of the cities of the League. Originally, there were three windows, but in 138YE the interior was remodelled by the artist and architect Geneviéve di Sarvos to include a new window depicting the city of Holberg - a project of great ambition in its own right that took three years to complete.

There is no Imperial Title associated with the Basilica of Aldones, and when decisions must be made regarding it they are made by the Cardinal of Ambition.