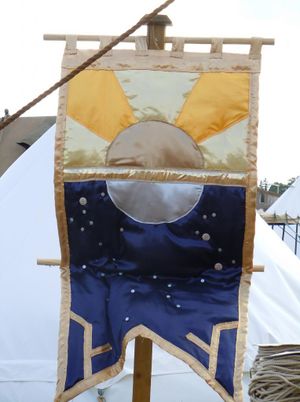 In Urizen, this magical standard often bears a depiction of
one or more constellations.

A Celestial Sigil is a magical standard that is infused with the power of mana. Woven from soft wool, bleached with beggar's lye, reinforced with sungold and moonsilver, and carefully embroidered with fine silk threads imbued with iridescent gloaming, they often depict astronomantic constellations. The banner pole is invariably of weirwood, often shod and bound with mithril, and embellished with dragonbone. It is most popular with the Urizen (unsurprisingly), but warbands of Dawnish witches are also known to favour the power of this magical standard. Some Varushkans call it a Firebird Banner, referencing both the constellation of the Phoenix (with which it is often adorned), and the way that the standard empowers magical healers to restore man additional warriors - or sear their enemies with devastating incantations.

The bearer of the standard can tap into a deep reserve of extra mana allowing them to perform many more incantations than they might otherwise - something not usually possible with a magical talisman. Some banner bearers draw on the standard's magic to allow them to heal or empower their allies. More martially inclined banner bearers - especially Dawnish war-witches and Imperial orc warcasters prefer to fight with a Celestial Sigil in one hand and a rod in other (especially magical rods that further increase their magical prowess). By combining the power of a Celestial Sigil with items such as a Neophyte's Aid, a Battlesmith's Panoply, or an Ashen Mantle, a martial magician can increase their reserves of personal power even further.

The most famous Celestial Sigil was carried into battle in pre-Imperial days by the sentinels of Urizen. A valuable artefact, it served as a rallying point for mages and sentinels of the Citadel Guard - perhaps most famously in the campaign against Alderei the Fair. Historians record that it was one of the first banners to bear the beautiful image of the Phoenix that adorns many Urizeni banners and standards to this day. Sadly, the artefact was lost in 54YE during the scouring of Redoubt. The standard was consumed in black flame by the will of the Ashenblood Knight, a powerful servant of the eternal Surut. The exact circumstances of its destruction are unclear. Some historians claim the Ashenblood Knight was fighting for the orcs and destroyed the sigil after defeating its bearer, Salome of Highwatch, in a duel. Others disagree and claim that Salome offered the standard as tribute to the Thrice-cursed Court to bind the Ashenblood Knight to her service for a time. Regardless, this powerful symbol of Urizen martial might was lost forever in the early years of the Empire. In the centuries since, however, many generals of the Citadel Guard have made a point of fighting under a celestial sigil, perceiving it as a powerful reminder of the victories of the past - and the cost of failure.

The Celestial Sigil is a symbol of magical power, and as such it often encourages its bearers to seek out and overcome other magicians. On the battlefield, this means the standard is favoured by regiments who have good reason to fight powerful sorcerous foes - although it does occasionally cause problems when the banner is carried in other places especially the Imperial Conclave.

“You must focus your minds on the connection” Calacius spoke as a drift of snow fell upon the spire courtyard around them. He motioned to the flag that lay unfurled before them all. A design that, while simple, was striking at the same time; the fountain Calacius had stitched it himself deciding that the aesthetics of the banner were wholly appropriate for the group of Urizen around him. Dressed in a simple, unadorned robe the Urizen magician seemed untroubled by the temperatures and appeared as comfortable as if it were a cool summer’s day. Seven others stood forming a circle beside him, similarly dressed and showing equal stoicism in the face of the cold. Each stood before a different carved symbol at their feet; the runes of The Way beautifully engraved and lined with shining weltsilver and glowing ambergelt. Each bore a simple, unadorned staff of pale wood, held at ease beside them.

“Ambition, our drive to perfect all that we are” spoke the first, a female Cambion whose horns were hung with arcane fetishes.

“Courage, to use all that we know where it is needed.” Atticus, an elderly man bent almost double with age. supported himself on his staff but his grip was strong and sure.

“Loyalty, to the spires, the Empire and the pursuit of perfection.” The third, a Merrow, the rest of those around him reflected in his glassy eyes.

“Pride, in the knowledge that we stand above all in our art.” The fourth speaker was a young man whose warrior’s stature seemed a little at odds with his quiet demeanour.

“Prosperity; the richness of knowing and the rewards of our labours.” The woman who spoke next turned her head left to right as if listening to something only she could hear, the strands of silver woven into her hair shimmering in the light of the glowing globes around them.

“Vigiliance, to watch for the darkness that threatens us all, to use our talents for the good of the Empire,” rasped the sixth, her skin toughened with pale-brown patches. A Briar, uncommon among the Spires of the Urizen she stood beside her brethren as equal, her worth in battle proven by the bark that marred her beauty.

“Wisdom, for it guides us always” Calacius finally spoke again, completing the circle.

They each raised their staffs before them and banged them once, hard on the stone courtyard. As they did, each fancied they could see dancing lights coalesce around them, vague shapes that formed in the air. Wrapped in their own thoughts for a moment, they shared an endless second of unspoken communion before the lights faded in their minds and floated towards the flag and were absorbed by the fabric.

“As one we learn, as one we fight” Calacius pronounced, bowing his head slightly to those around him who repeated the motion. “Now steel yourselves for we march on the morrow. Go with wisdom.”
Retrieved from "https://www.profounddecisions.co.uk/mediawiki-public/index.php?title=Celestial_Sigil&oldid=80998"