"How does the Sentinel Gate know where to go?"

"It's an artifact Marthe, it's not alive... it doesn't know anything."

"So how come every conjunction is always to somewhere important?"

The enchantress signed, she stood by the idea that it's a good thing if your yeoman ask important questions - but she would prefer it if they stuck to things they knew anything about. "It's fate. The Gate is linked to the magic of the stars - the constellations. Each conjunction represents a moment of fate - they are opportunities for fate to change."

The yeoman carefully poured the wine as she asked the question "So why doesn't it just let more people go?"

Morgause burst into laughter. "I've already explained Marthe - it's not alive. It's not trying to help us - it's just a powerful arcane effect. The point is that those moments, those conjunctions, wouldn't exist unless the outcome hung in the balance. If a hundred armoured knights could turn up and flatten everything... then it wouldn't be a conjunction because that element of uncertainty would not exist. The Gate literally cannot form a conjunction for too many or for too few people. It can only form in such a way that if everyone goes then they have the chance to triumph."

Marthe stopped to ponder that new information for a moment before announcing "I reckon it must be Dawnish then."

Morgause laughed so hard her goblet shook spilling wine. "Whatever makes you think that dear one?"

Marthe started at her Enchantress and then grinned from ear-to-ear "Cuz it sounds proper glorious dunnit?" 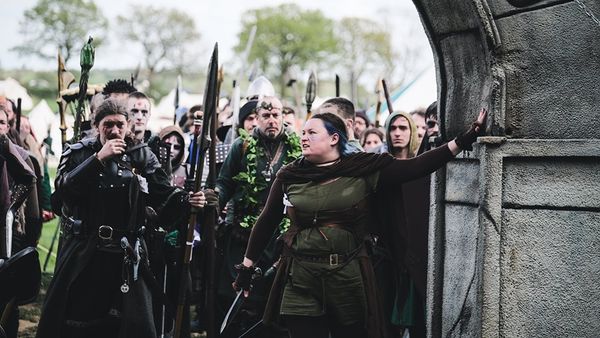 Andy Raff is just puting up the wind of fortune that describes some of the conjunctions with military options that are available this weekend, so I thought I'd take a few moments to talk about them.

These conjunctions generally represent opportunities that the civil service who support the military council have been able to identify by combing through scouting reports and similar. They then check to see if there are any conjunctions in an area that looks promising by casting detect magic on the Sentinel Gate, or by asking an egregore if one is available.

These are far from being the only conjunctions of the weekend - these are simply the ones that have been identified by the Empire in advance. We do it this way because these conjunctions normally represent opportunities for skirmishes and they are usually linked to the ongoing military campaigns of the Empire. In effect, they are like the battles in the sense they are open to all players but they are designed to appeal to some nations or groups especially strongly. We run lots of other conjunctions linked to ongoing plots, some in the woods and skirmish fields but most in our encounter tents, but you generally only find out about those if you are actively engaged with the ongoing plot.

Many of these conjunctions are very dangerous! You can easily end up losing your character on one, so it's wise to take some essential precautions to minimize that. In most cases they are deliberately designed to be a tough dangerous fight - one that will kill you if you make a mistake. There is some random element in that level of danger - obviously we can make mistakes too - but by design they are pitched at a level intended to deliver a challenging encounter.

So what can you do to prepare? Here are my three top tips.

This can easily make the difference between life and death. If an encounter offers you the chance to slip between enemy lines under cover of darkness to recover a lost message... then you may want to leave the regimental musicians back in Anvil. There are lots of places you can get in-character information from. Your first source is the civil service information published before the event which will contain useful information about what is happening in the area you will be going to. But once you get to the event, you will usually be able to find more information by talking to the war scout (whose tent is conveniently near the Sentinel Gate) or the egregore (whose nation the conjunction is to).

Quick Check: If you get to the Sentinel Gate and you ask "What is this skimish to do again?" and you don't know and nobody around you knows... then you are probably all going to die.

Empire includes loads of ways to make your characters more powerful through roleplaying with others. You can acquire personal enchantments, magical items, potions, herbs and mana crystals. We assume a certain level of preparedness by the players - that's factored in to our assessment of how hard to make the fight. That means that if you go all out to do everything you can then you significantly increase your chances of success - but if you don't make any preparations then your chances of failure also go up.

Quick Check: If you get to the Sentinel Gate and you ask "Has anyone brought any herbs?" and you haven't brought any and nobody around you has either... then you are probably all going to die.

Empire includes a mix of hard-skill and soft-skill elements, but every extra body is crucial if there is a fight. If you're incredibly good at fighting and you've done a huge amount of preparation then you can improve your chances - but if a skirmish allows an extra 10 people to go on it... then nothing is going to improve your chances as much as finding another 10 people to come with you. We occasionally encounter the assumption that if only half the number of people go... then PD will scale down the challenge accordingly. That is NOT what happens - we never rescale the challenge to match who turns up - because to do that would completely undermine all the in-character efforts you've made to get yourself ready for this. A skirmish that has been written to be a tough fight for 25 people is a tough fight for 25 people... if you go on with 10 people, then you've got no chance of success and very little chance of surviving. You can check how many people can go on a conjunction at any time by casting detect magic on the portal - if you know where the conjunction is to, then the referee will tell you precisely how many people can go.

Quick Check: If you're at the Sentinel Gate and you ask "How many people can go?" and the answer is 10 people more than you've turned up with... then you are probably all going to die.

I've been a bit tongue-in-cheek with this update - but hopefully people can see the serious point. We want to do everything we can to help you have an epic encounter and this game update is part of that.

Our goal is always to give you a really challenging encounter - we are absolutely not trying to get group wiped out that's the actually the very last thing we want to happen. But the only way I know to give you a genuinely challenging encounter in LRP is to make the risk of failure real. Assuming we've got our job right then the things listed above will have a big impact on whether or not you will succeed - and whether or not you survive!

It is possible to commit no mistakes and still lose. That is not a weakness. That is life.

I want to stress that nobody can control every element of a conjunction - not you and not us. LRP is inherently unpredictable because of the live nature of the art-form. So it's important to appreciate that sometimes you might die, even if you've checked all these boxes. Sometimes you roll the dice and they come up snake eyes! But you can control the actions and preparations you make - and trust me they will make a huge difference to your chance for triumph and glory!