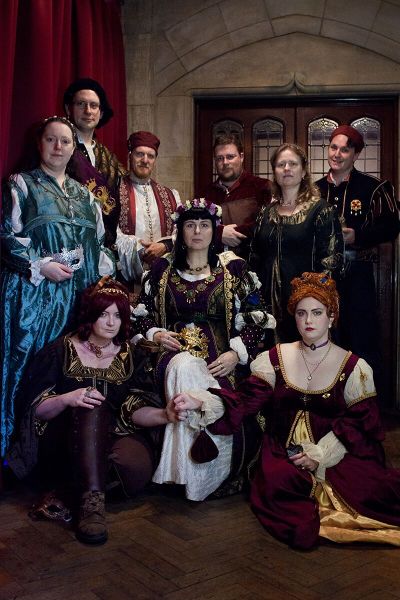 Imperatrix Lisabetta and members of her Guild at the Pledge Ball 380YE.

The eldest child of Elise Giacomi of Tassato, and Gyorgy Yakovitch of Temeschwar, the young Empress-to-be excelled at the study of music and philosophy at the prestigious University of Tassato. After completing her studies, she was reluctantly drawn back into her family’s long-established Temeschwari business, the Hearthfire Guild of Arms and Artisans, and six years ago set up a new branch in Holberg after succeeding her mother as Prince of that guild.

Her rise in the political sphere has been remarkable. Shortly after arriving at her first Anvil Summit in the Winter of 378YE, she was appointed Conscience of the Senate by the then Cardinal of the Way Beodun Snowlock. She served her year’s term with distinction and immediately afterwards took on the role of proxy to the Warmage, carrying out the full responsibility of that role during the storm-wracked summit of Winter 379YE. She announced her candidacy for the Throne shortly before the Summer Solstice of 379YE and it took nearly a year of hard work to achieved the support of the Senate.

Finally, during the Spring Equinox 380YE, Lisabetta von Holberg was elected as the twentieth Empress.

At her coronation during the Summer Solstice 380YE, Lisabetta was crowned with a coronet of summer flowers woven by the young heroes of the Academy, rather than with the Imperial Crown. During the Spring Equinox 381YE, Lisabetta became the first Throne since Empress Brannan to be crowned monarch of Dawn.

At the Autumn Equinox of 382, following an announcement earlier in the year of her intention to marry, Empress Lisabetta married Juha the Cave Spider of Varushka in a private ceremony held in the Senate building during the Anvil summit.

At the Summer Solstice 383YE, Lisabetta Giacomi von Holberg disappeared. The one thing that is known for certain is that the egregores of the League confirmed that they could no longer sense her. After careful deliberation, the Constitutional Court has confirmed the Throne must be legally considered to either be dead or to have resigned her position.

More details can be found in the Autumn 383YE Winds of Fortune.

*The coronation of Oor Betty.*

5pm - The coronation procession, wherein the Empress progresses through all ten nations commencing with a ritual handwashing at the Highguard camp - directed by Yael of Felix’s Watch

5.30pm - the procession reaches the Glory Square. Seats will be un-reserved, save for the coronation party, to number 10 at maximum.

5.30pm - the coronation dance of the Brackensong of the Navarr

Runedance: A spoken word performance, with musical and dance support. Blood of the Empire: A song with dance and a gift presentation

5.40 - the singing of the Coronation anthem, led by the Volchitrava Stzena of Varushka.

The Dedication to Wisdom, by Friar Edward of King’s Stoke, called ‘Watcher’, of the Marches

The Presentation of the Shield, by Imperial Orcs

The taking of the Ring, by Severin von Holberg of the House of Seven Mirrors of the League

The presentation of the crown, by Athelstan of Wintermark.

The crowning, by the Cardinal Of Wisdom, assumed to be Agnetha de Rondell of Dawn

6pm The ceremony ends with the Imperial Anthem, led by Sister Meredith and the singers of the High Courage Chorus of the Marches.

(Notes provided by John of Meade, a Speaker of the Senate at the time.)

It is important to bear in mind that Empress Lisabetta is a player, and not a member of our NPC crew.