There are five potent herbs that are common throughout the Empire. These herbs are infused with magic which allows them to be used by a skilled physick to cure a range of ailments.

An apothecary can instead use herbs to brew a potion, which can then be used by anyone who is not dying on zero hits.

Many other herbs exist in the Empire setting. A small number have magical properties (such as realmsroot) but for the most part these herbs exist below the abstraction layer. While they may have useful qualities, but they are not used in the creation of potions or the treatment of conditions. Examples include the contraceptive plant bitterweed, the herb used to allow a person to change their gender expression, tobacco, tea, and the many plants with minor narcotic or medicinal effects such as those found in the marshes of Kallavesa. Players are free (within reason) to create and talk about these minor herbs as they see fit, as long as they understand that they remain below the abstraction layer and will not have an impact on the game. 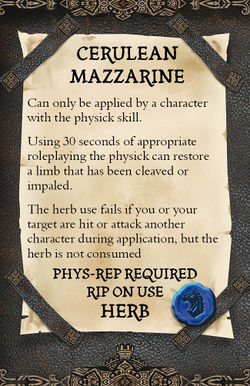 There are five common herbs in the Empire; it is possible for fleet owners to purchase them from foreign ports but most Imperial herbs are grown in a herb garden. A character who owns a herb garden will receive 14 herbs from their resource in their downtime.

Although herbs have powerful healing properties, they require skill to apply. They can only be applied by a character that has the physick skill, usually as part of some appropriate medical roleplaying.

Herbs are indicated by a small card (85mm x 55mm), printed by Profound Decisions, that indicates the presence of the herb and includes the rules for using the herb. You must provide a phys-reps for any herbs that your character owns, and the cards should be kept with the phys-reps, otherwise you cannot use the herbs in game and should not carry the cards on your person.

An appropriate phys-rep for a herb is a small vial of liquid, or a pile of herbs, leaves or pieces of plant matter. You can also focus on phys-repping a suitable container for the herbs instead if you prefer.

In addition to the five potent herbs there are a number of less common herbs like realmsroot. These herbs are hard to cultivate and often lack the power or flexibility of the five most useful herbs. These rare herbs use a potion lammy rather than a card - it is not possible to be certain what they do until they are used. 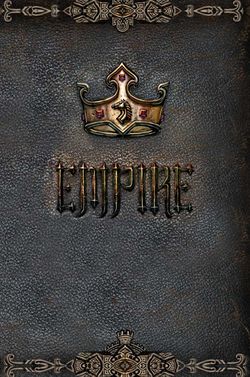 Blue mazzarine to save a limb