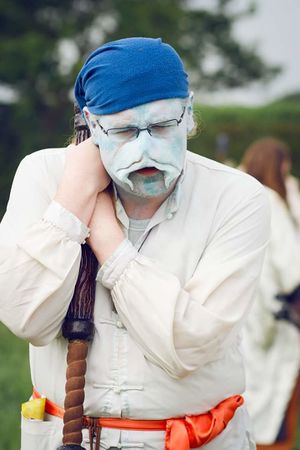 The Provost guides the magicians to formulate new rituals.

The Provost of the Halls of Knowledge was an Imperial title bestowed upon a magician by the people of Urizen. It was a national position appointed through the Bourse.

The Provost oversaw the Halls of Knowledge, a centre of learning that once stood high in the peaks of Zenith. Shortly after the Autumn Equinox 381YE, however, the college disappeared and reappeared by the largest of the hot springs of Peregro in Morrow. It was ultimately destroyed by the Druj, burned to the ground shortly before the Autumn Equinox 382YE.

There was a great deal of rivalry between the scholars of the Halls of Knowledge and those of the Lyceum. The Provost guided the magicians of the Halls, and by extension some of the finest minds among the Urizen magicians, in researching new rituals. Under their guidance, magicians co-operated to formulate new rituals in a matter of months rather than decades.

When the Lyceum was established during the reign of Empress Aenea, many Urizen expected it to be built in their nation. To their surprise, the Senate instead chose to build it on an island off the coast of Madruga. Records suggest that the Urizen were outmanoeuvred by a coalition of Freeborn and League Senators, but the Urizen themselves admit their inability to focus their support around a single location almost certainly weakened their position. The spires of Weave in Morrow and Ankarien in Spiral (among others) both put forward strong cases and divided the Urizen Senators. The Urizen made an effort to support the Lyceum, being gracious in defeat, but there is no doubt that they considered the centre of magical learning in the Empire being anywhere other than their nation to be an affront.

When the territory that is now Zenith was added to the Empire during the reign of Empress Varkula, the Urizen proposed a second magical academy. They made their approach carefully and suggested that, rather than threaten the Lyceum, the new academy would help unite the magicians of Urizen and allow them to pool their magical lore for the benefit of the Empire. Rather than use an existing spire, they created an entirely new one and called it the Halls of Knowledge. The new Provost was responsible for directing research, and ensuring that Halls of Knowledge were protected and supported by the Empire. A number of respected theorists and seers travelled to the new academy, and it soon became known as the place to go for prognostication and the study of Day magic.

While the Provost had the final say in the research agenda of the Halls of Knowledge, it was common for other magicians to approach them and suggest areas which might benefit the nation or the Empire. There was usually less pressure on the Provost to ensure that the magic they are researching is "useful" - and less emphasis on sharing that knowledge with the Empire (as opposed to using it constructively to advance the cause of Urizen or the Empire). Some Provosts made healthy profits from their post, researching rituals that the Dean of the Lyceum had refused to develop or trading the rituals they formulate for political or monetary gain. Most prefered to focus their researches to the benefit of Urizen or the Empire, aware that they hold their position at the discretion of the magicians of their nation.

Not all the magicians of the Halls of Knowledge lived within its walls; many remained in their home spires and correspond by letter or (rarely) through short messages sent via the Heliopticon. Unlike the Lyceum, there were few magicians associated with the Halls who were not Urizen, and those who were would invariably be practitioners of Day magic. Still, it was common for magicians from all corners of the Empire to spend some time studying at the Halls, and to offer their services to whatever research is underway there. It was also common for the best Civil Service prognosticators to study at the Halls of Knowledge, and a proportion of all mana paid to the spire for its services was used directly for the casting of divinations useful to the Empire

Needless to say, the Halls of Knowledge had a great deal of interest in the identity of the Archmage of Day is; the Provost was often encouraged to try and ensure that the holder of that title is well disposed towards Urizen, when they were not from the mountains themselves.

The Provost of the Halls of Knowledge had the ability to direct the research of the magicians who live at the spire; with the destruction of the college of magic these powers were lost.

This title was appointed during the Winter Solstice. The Provost of the Halls of Knowledge was appointed by Urizen citizens who controlled mana site personal resources. The larger the mana site an individual had, the more votes they could allocate in support of a candidate. The voting was handled by the civil servants in the Bourse.

Only an Urizen citizen could hold the title. They did not receive a seat on the Bourse. As a title appointed through the Bourse they could not be revoked by the Imperial Synod.

This tile is no longer being elected as the college of magic it was responsible for has been destroyed or is not in Imperial hands. The table to the right shows the citizens who have been elected to hold this title in the years since Empress Britta died.