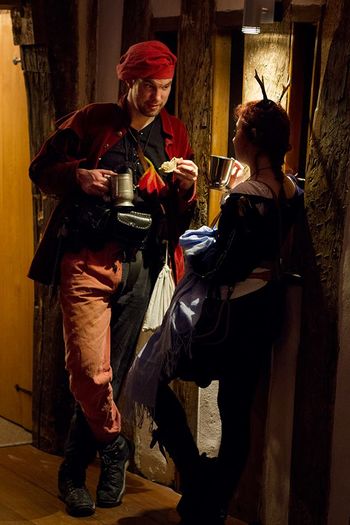 Rodrigo Barossa de Tassato Regario of the Company of the Red Fox, who
took the Seat in Summer 378YE, having a quiet conversation with
Doctor Beatrix Amalia de Rondell zu Holberg.

The Regario Dossier is an Imperial title. It is a national title, that can be held only by a citizen of the League. While it provides a small bounty of the miraculous material ilium each season, its real purpose is to provide the holder with an annual report from agents based in foreign ports, with a special focus on matters pertaining to international trade. It is technically operated from a small office in Tassato Regario, but in truth this is merely a convenient front used by the civil service.

Established in 173YE, during the reign of Emperor Frederick, the Regario Dossier is a list of small concerns that individually provide only one or two rings of ilium a year. Together, they provide a small but regular income of the valuable material. The real purpose of the Regario Dossier is to support the League diplomats active all over the world, making contacts with foreign powers and attempting to sway them to the Empire's side. Such activities require considerable funds but the gains for the Empire are difficult to overstate. If too many foreign powers were to ally with the barbarians, the fate of the Empire would surely be lost.

This Bourse position is reserved for a citizen of The League who presents the largest bid. It is widely claimed that the payment is used to pay for bribes and other diplomatic arrangements. In fact this is hypothecation, the costs of operating the dossier are fixed and the money from the auction goes to the Senate as with other Bourse seats.

The holder of the Seat, and custodian of the Regario Dossier, has few responsibilities. In return for their bounty of ilium and annual report, they are sometimes called on to make decisions relating to the agents of the dossier. If any of the small concerns that provide ilium to the seat were threatened, the custodian would be responsible for resolving the situation and protecting the resources. As with the Master of the Imperial Mint, there is an informal expectation that the custodian of the seat will work in the best interests of the Empire (especially as it related to Imperial trade), but this is hardly enforceable. While there is a perception of the holder of this Seat as a sinister master of espionage, in truth they actually have almost no influence over the actual agents of the dossier.

The Dossier oversees several small sources of ilium, and receives ingots of this precious metal each season which they can dispense as they choose. Production is 4 rings of ilium every season.

Each Spring, the holder of the seat receives an annual report regarding the state of the Empire's relations with foreign powers. Prior to Autumn 379YE, the report covered Imperial relations with the Asavean Archipelago, the Commonwealth, the Principalities of Jarm, the Sarcophan Delves, and the Sumaah Republic. The reports tend to focus almost exclusively on matters relating to international trade that might effect the Empire. The holder of the Seat cannot give instructions to these agents, and communication between the Seat and the agents is generally limited to the receipt of the annual report.

In Autumn 379YE, the Imperial Senate passed a motion to expand the Regario Dossier, allocating funds to allow recruitment of agents to be sent to include the Axos, the Iron Confederacy and the Faraden. Even with the increased funding, gathering information from some of these nations has proved difficult, as the Empire has few existing trade ties with Axos or the Iron Confederacy.

Agents of the Regario Dossier

The agents of the Regario Dossier are based in foreign nations where they sift through endless reports for useful information which is sent back to the Empire once it has been verified. The agents always referred to by pseudonyms, each named after a significant river. Agent Couros is based in Nemoria in the Asavean Archipelago; Agent Vassa based in Zemeh and the Sumaah Republic; Agent Scorrero based in the city of Jarm in the Jarmish Principalities; Agent Gancio based in the port-city of Leerdam in the Commonwealth; Agent Umshalla based in the Sarcophan Delves in Sarcophan; Agent Nepenthe based in Kantor on Axos; Agent Serpes based in Robec in the Iron Confederacy; and Agent Alephan based at the Court of the Five Winds in Faraden.

In reality, these Agents tend to be figureheads responsible for collecting and compiling reports from one or more other agents active in the foreign nation. These agents are largely able to avoid detection because residents of the nations where they are active are used to seeing Imperial merchants and even Imperial citizens who have settled there. Consequently, while the Regario Dossier has been able infiltrate Faraden successfully, attempts to gain a foothold in the Iron Confederacy and Axos have proved much more difficult.

The holder of the seat never knows the identity of these agents, and is absolutely discouraged from interfering in their affairs. All communication takes place through an office of the civil service (referred to as Agent Catazar on the occasion that they provide any documents themselves), allowing for the security of the agents to be preserved in the face of regularly changing seat holder. The autonomy the agents possess is generally considered to be a key to their success, and endangering it would almost certainly reduce their usefulness.

The agents of the Regario Dossier gather intelligence from a network of spies and informants, with the latter far outstripping the former. In practice most informants are Imperial traders who regularly visit a nation, or former Imperial citizens who have settled there. The most successful agents have been able to subvert a small number of minor government functionaries and others though the use of judicious bribes. Informants provide a wealth of information, though most of it is of relatively low value, comprising largely of rumours and gossip.

There are far less actual spies - perhaps no more than a dozen as of 379YE. Spies are usually Imperial citizens who claim their first loyalty is to the Throne, thought they may also be malcontents or revolutionaries who are opposed to undermining their own nation. The most useful have found a way to gain employment serving the government or the powers-that-be of a foreign land and are thus in a position to provide the Empire with inside information. They tend to produce vastly less information than informants; usually they will be unable to provide anything of value for years at a time. However when they do stumble across something of value, it can be incredibly useful, giving the Empire advance warning of things that no amount of informants would ever have passed on.

The custodian of the Regario Dossier receives a report each year, comprising information compiled from details passed on by both spies and informants. On the rare occasion that an Imperial spy discovers something of exceptional value and urgency, it will be passed back to the holder of the Regario Dossier immediately.

What do foreign powers know?

It is likely that the foreign nations active on the world stage know the Empire maintains agents in the midst of more legitimate merchants. Indeed, these powerful nations would expect the Empire to do so. It is almost certain that those nations maintain agents of their own within the Empire to keep abreast of the broad strokes of Imperial policy, especially as it relates to trade relations. A common understanding is that while the Regario Dossier agents are involved purely in observation relating to trade, they are unlikely to be a big enough concern to cause their hosts to remove them - which is another reason why the Seat holder is unable to issue specific instructions to them. There have been incidents in the past where agents have been arrested, or have disappeared, but they are few and far between.

Custodianship of the Regario Dossier is a League Bourse position. Election is by open auction at the Spring Equinox each year. Any League citizen may bid for the title.

The position of custodian of the Regario Dossier is re-selected at the Spring Equinox each year. They cannot be revoked by the Imperial Synod.

The Regario Dossier in Play

The Regario Dossier is first and foremost a Bourse seat. Beyond the annual report, it does not provide additional information about events in the Empire, or in any foreign nation, nor does it allow the player holding it to request special reports or downtime actions. These details are assumed to be below the abstraction layer. The title holder is encouraged to create their own stories about their activities within reasonable limits and to get involved in events appropriate to their title during the game, but they do not have any powers beyond those explicitly listed in the section on powers.