Shadow in the west

Shadow in the west

"They're slaughtering everyone who puts up a fight. If you stay here, you'll be killed." He tried to keep his voice calm, his old man would think less of him if he cried.

"Reckon you're right son" The speaker's hands were wrinkled with age, the thick sinews clearly visible beneath the skin as he strained to pull the ancient bow.

"You can't possibly kill them all, you haven't even got enough arrows!" He tried to keep his voice calm, his Da hated it when anyone shouted.

The old man didn't bother to respond at first, concentrating on slowly releasing the tension from his bow. He paused to get his breath back and then murmured "Reckon you're right son" before slowly pulling the bow again, straining to hold the draw as he sighted on the tree at the end of the lane. "But I only need to kill one."

"If you're stopping then I'm stopping. I'll tell Ellen to take the girls to Hay by herself." He tried not to think what Ellen would say if she could hear him. One argument at a time.

"Brave words dig graves" the old man said through gritted teeth. He carefully relaxed his grip on the bow before continuing "You and Ellen are going to Hay."

"You're not too old to come with us Da! You won't slow us down I promise you."

"Reckon you're right son." The old man finally lowered his bow and turned to face his son. "But two young children will. You'll need to carry them half the way to Hay. So I have to slow the buggers down and the answer lies in the soil."

"Da, you'll be dead five minutes after they come over the hill! And not even a landskeeper's magic could hold them back."

"Reckon you're right son." The old man paused for breath as he raised the bow again and prepared to draw again. "But the Jotun are not like other orcs. If I kill just one then their priest will have to say the rites. And he'll want to bury the body if he can." The old man's face broken into a broad grin at the last. "They'll kill me quick enough no doubt" he chuckled, "but they won't know that it ain't rained for nearly two weeks here, so burying their dead in our soil is going to take them damn near the rest of the day..." 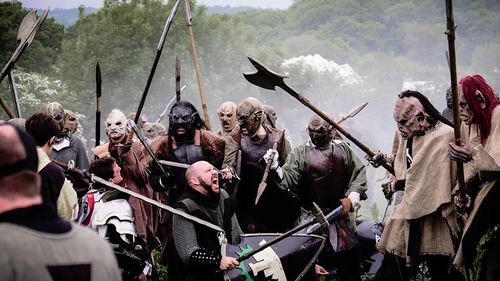 A long shadow has fallen over the west of the Empire. Isolated Jotun raids have long been a feature of the border regions, but there were rumours that they were growing in intensity at the Spring Equinox and now it is clear that the threat is all too real. Bands of Jotun raiders have attacked farmsteads in Bregasland, Mitwold and Upwold before retreating back over the border to the Mournwold. The citites of Meade and Tassato remain safe but the lands around them both are plagued by raids, while in the north there are reports of Jotun attacks against halls in western Sermersuaq and Kallavesa.

The news is not all grim. Two distinct Jotun warbands raiding Sermersuaq are corned and wiped out by the Imperial armies stationed there.

Better yet, the two military units assigned to Fort Braydon in Kahraman - their ranks swelled by a regimented array of crystal warriors commanded by Anwar i Del Toro i Riquezza - are able to intercept a Jotun scout, carrying information back to the Jarls. It is clear from the scout's interrogation that in the coming season the Jotun intend to continue the probing attacks on Mitwold and Kahraman, but to launch major raids into Kallavesa, Bregasland, Upwold, and Tassato.

The fortifications of Forte Fidelis in Mitwold and Fort Braydon, as well as the Imperial armies in Sermersuaq, are sufficient to protect these territories from the raids this season, provided the raids do not grow worse.

If the Empire does not find a way to blunt the impact of the other raids however, then every business, farm, forest, mine and herb garden in Kallavesa, Bregasland, Upwold, and Tassato will suffer a significant loss of production. The Eastern Guard in Upwold is too far from the Marcher border to protect against the raids as they currently stand, it would need further reinforcements to provide assistance.

At present there is definitely no sign of any Jotun army moving over the border, but this is a grim omen. Historians claim that when the Jotun raids begin in force, it is usually a prelude to war.

The response has been swift and co-ordinated; the generals of the Red Wind Corsairs, Winter Sun, Fist of the Mountains, Hounds of Glory in Kallavesa, Bregasland, Upwold, and Tassato respectively. This has lead to several skirmishes, but the presence of the Imperial armies blunts the impact of these raids quite effectively.