Shepherd of the Great Herd

Shepherd of the Great Herd

The Shepherd of the Great Herd is an Imperial title awarded to an Imperial Orc citizen. It is a national position appointed by majority vote of the Imperial Orc senators. The position is a sinecure, requiring minimal responsibility but offering a regular income drawn from the profits generated by the stewardship of the herd.

The Shepherd of the Great Herd is a hands-on duty. To raise such a large herd the Shepherd is gifted the means to beat the great rhino skin drums that call the hardy uplands cattle down from the surrounding hills and valleys of eastern Skarsind. It falls under their judgement as to when best to call the cattle back down from the hills and when to let them roam free. The highland cattle are both valuable for meat, horns and leather but also their wool which can be collected several times a year. As a token of their responsibility, the Shepherd is gifted the pick of the vast herd, while much of the meat is bought to feed the legions of the Summer Storm and Winter Sun as they fight far away.

The Great Herd was the first Imperial project authorized by an Imperial commissioner after their creation in 379YE. Keen to improve the fortunes of their new home, the Imperial Orcs gathered the resources needed to invest in the wealth and prosperity of Skarsind. 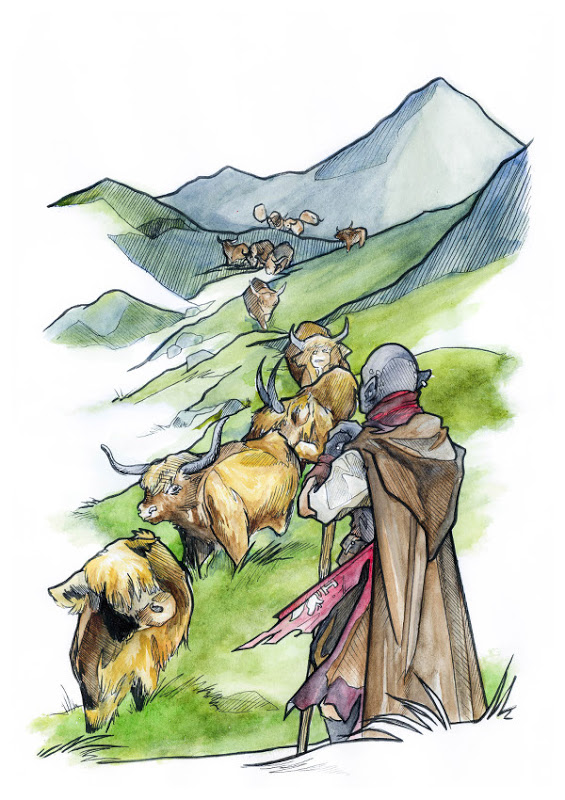 It is the expectation that the Shepherd will provide protection and care for their herd, intended to be the largest herd in all of the Empire, and eventually the world. Like a general might command their troops in battle and not be beyond leading them in the charge, the Shepherd equally should not be above mucking in with those orcs who seek employment marshalling this enormous herd of cattle. It is far from a one-orc job but the Shepherd is ultimately responsible for the actions of all those in their employ and every single head of cattle.

The Shepherd has no legal powers, but receives the pick of the vast herd each season. From this bounty the holder of the title draws an income of 216 rings a season.

The title can be held by any Imperial Orc citizen. The shepherd has tenure, and serves until they die or step down. They can be revoked by the General Assembly, the Imperial Orc National Assembly, and by the Assembly of the Nine.

When Skarsind was first announced as a potential future homeland for the Imperial orcs, many business and farm leaders from across the Empire took great interest in sharing their experience and knowledge with the fledgling Imperial Orc nation before it took the great leap into establishing a homeland for itself.

With the wisdom of years of raising transient herds of their own to follow the large Imperial Orc armies and the gift of good breeding stock from the Marches, the Imperial orcs gained everything they needed to establish their own vast farms.

Taking on the knowledge and advice from the rest of the Empire, with help from their own scholars, such as those among the Skywise banner, the Imperial Orcs created a new style of farming. A no fences approach was designed that would allow the cattle to roam free and graze over greater distances, in hope this would avoid bringing great harm to the more fragile alpine grasslands previously unused for such large herds.

The cattle would be trained to respond to the sound of a beating drum. Rhino skin was used as the deep sound was unique and would carry over vast distances through the valleys and hills. Orc handlers used to marching great distance as soldiers with the legions would be needed to patrol, keeping wild beasts and raiders from claiming the best of the breeding stock. While some of the herd would be lost, the weight of numbers would maintain a profitable venture that would bring prosperity to the surrounding areas and Imperial Orc armies beyond.

This title is currently held by Luga. This title has tenure, the occupant may hold the title until it is revoked, they die or they relinquish the position. The table to the right shows the citizens who have been elected to hold this title in the years since Empress Britta died.