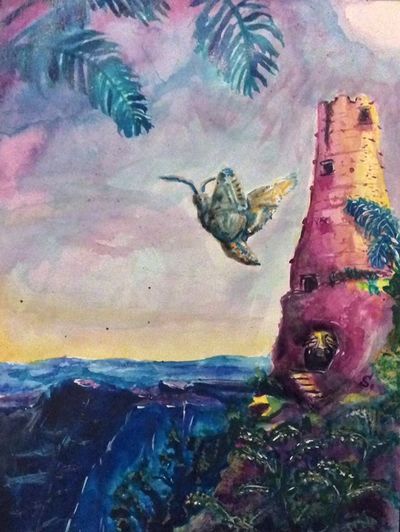 The ritual provides dreams of an exotic, phantasmal land that
grant magical insight and inspiration.

Performing this ritual takes at least 2 minutes of roleplaying. This ritual targets a character, who must be present throughout. The target character must have the magician skill.

During the performance the target must eat or drink a ritually prepared consumable such as a goblet of wine or fruit-juice, a square of chocolate or a mushroom. This may even be a special item such as a potion or drug; in such cases the special item will have its normal effects.

Whenever the target character sleeps overnight they will experience vivid dreams. At sunrise each morning, the target gains an intuitive understanding of a single realm lore of their choice. This provides an additional rank of effective lore for purposes of performing rituals, subject to the normal rules for effective skill. Furthermore, they can choose to change the lore the bonus applies to each morning after they awaken. In essence, the enchantment gives the target an additional rank of Realm lore the day after it is performed, and allows it to be changed first thing in the morning after a night's sleep. It is not possible to gain or change the bonus earlier by having a nap.

While the enchantment lasts, the character experiences a roleplaying effect: Colours appear more vivid, scents and tastes feel more intense, and on the edge of hearing you occasionally hear a sound like a murmuring crowd, a windy forest, or the crashing of waves on a beach. These sensations return and fade at dramatically appropriate moments, and may occasionally become overwhelming.

If the target is a naga, the roleplaying effect is especially pronounced. A naga may also choose to temporarily add to or increase physical trappings of their lineage. These changes are temporary and do not last more than a few hours after the enchantment ends.

If the target does not sleep and dream for at least six hours they do not gain the benefit of the ritual. A character under an effect that significantly impedes sleeping or dreaming, or that provides specific dreams as part of its magic, removes the bonus provided by the enchantment. This includes curses such as Dreamscape of the Endless Hunt, the effects of potions or magic items such as Shadowcrow Infusion or a Shackle of the Unvirtuous, or having one's dreams guided by a priest using liao. The enchantment does not end prematurely - the character simply cannot apply the bonus rank of ritual lore the following day. If in doubt about whether you would receive your bonus rank or not, consult a referee.

The Dreamscape
The dreams experienced while under this enchantment take place in a strange, dark, place of lost secrets; dunes and valleys of dust and tumbled stones, littered with ancient tablets, strange containers, looming towers of alien aspect and great, trailing metal chains roping from place to place. It is always night time, and immense white moths drift across the moon far above (when there is a moon), beyond the reach of even the most persistent dreamer. In the distance, great mountains rear up toward the sky that dwarf anything in the waking world - sometimes it seems as if they are tall enough that the moon passes between them and the dreamer.

Scattered through the dreamscape are oases of colour and wonder; patches of lush jungle inhabited by loquacious tigers, erudite pythons and garrulous rainbow-hued birds surrounding clear crystalline pools. The boughs of the trees creak with heavy, succulent fruit. Many ritualists warn the dreamers not to eat the fruit, because the experience (which can never quite be recalled) invites comparison with every other taste. Those who eat the fruit of dreams food and drink in the waking world to be a little disappointing in comparison.

Sifting through the sand and picking over the ruins of the dreamscape of lost secrets can provide incredible insight, but that insight is fleeting. While a dreamer may recall reading a tome of magic, or deciphering a ritual in a long-dead language, they can never remember the specifics on awakening.

On rare occasions, someone who is undergoing the dreams provided by this ritual simply disappears. The only explanation is that they consider the dream world to be superior to the material world, and choose to stay there forever. Very rarely, dreamers claim to have encountered figures in the dreamworld that resemble and believe themselves to be, magicians who have experienced this ritual and chosen to stay behind.

This ritual uncovers secret and mysterious lore, and provides an intuitive understanding of the magic of one of the six Realms. The vivid, almost hallucinogenic dreams that it causes are remembered with utter lucidity. Comparing stories of those who have experienced the dream, there seem to be many common elements, supporting belief that the ritual connects the dreamers to a specific mental 'place'.

If the ritual is performed on a group, they share the same dream experience. They can converse, and details of the dream when they are all together seem to match up. If they separate for even a few moments, however, they are unable to locate one another again and experience solitary dreams from then on.

A lot of speculation exists around this ritual. The acknowledged Imperial expert on the shared dreamscape accessed by this magic, the Varushkan magician Simargl, the Empty One, is the latest in a long line of Night magic masters who have made extensive explorations of this ritual. It is clear that it is not simply a dream - it is very different from the mundane dreams mortals experience when they sleep. Experiencing the dreams provided by this ritual leaves many dreamers with the impression that their sleeping minds are somehow visiting a specific place - albeit a vast, shifting place whose landmarks change and move around seemingly at random.

A common belief among students of Night magic is that the dreamscape is the domain of some unknown and mysterious eternal - perhaps one of the creatures encountered in the oases, perhaps the ruined city or the forest itself. Night eternals are protean, after all, and change their appearance as they see fit. Regardless, nobody has yet encountered an eternal believably connected to this ritual, nor a herald that claims to represent it.

The nature of the domain tied to this ritual is shifting, unpredictable, and seems to defy easy classification. Attempts to physically visit it, gain concrete information about it or from it, or to use it to send messages or arrange meetings using ritual magic, have proved universally unsuccessful.

The power of the enchantment is disrupted by a number of things that interfere with sleeping or dreaming. There seem to be some exceptions; some oneiric drugs actually seem to make the dreams experienced as part of the enchantment more vivid. It also seems that the excommunication ceremony, which normally prevents dreaming, does not interfere with the effectiveness of this ritual, something that both puzzles and intrigues magical scholars.

The key component of this ritual is the food or drink used to inspire the dream-like state. Wine or fruit-juice mixed with soporific herbs are common, but some ritualists prefer honeyed milk. Chocolate and sweets are also used - anything with a strong taste, preferably something a little luxurious. When the ritual is performed all the targets consume a little of the same substance, which links their dreams together. The substance may be prepared during the ritual, or consumed at the start and the ritual performed as it takes its slow effect.

The ritualists are usually masked, cowled or veiled, and there is often slow, dreamy music. The ritualists might describe the elements of the dreamscape, offering advice and warnings about the mysterious place the dreamers will visit, or they may weave tales of wonder and arabesque adventure. Incense is commonly burnt, the more strongly-scented the better.

Mirrors are often used as part of this ritual. Some ritualists capture the reflection of the targets with the intention that if they become lost in the dream they can find their way back by remembering the mirror, and the more distinctive it is the better.

The runes Diras and Wyr are a common element, as are scenes of wonder and imagination and the constellation of The Door.

OOC Notes about the Dreamscape

You should feel free to create details of your vivid, lucid dream using the information presented here as a starting point. A referee will not provide additional specific information about the dream beyond what is presented here. The dreams tend to include elements symbolic of, or directly referring to, the specific realm of magic the player intends their character to gain extra affinity with. A character might intentionally seek out a specific lore, or might roleplay that they are wandering and letting their dream guide them - the end result is the same.

If you ever want to retire a character who has this ritual, then you can choose to have had them disappear while casting this ritual. If you do this, please, let us know for our campaign notes. Likewise, when you are the target of this ritual you may choose to disappear during the period between time out and time in the next morning. Again, please let a referee know and they will help you retire the character.

The dreamscape is a specific location, apparently in the night realm. It is not a place where people go while sleeping, but a location that is visited as the consequence of this ritual. Attempts to interact with the dreamscape using an arcane projection is likely to be tricky, given that its essence seems to be a complete mystery to mortal magicians.

It is worth noting that the Winter ritual Dreamscape of the Endless Hunt is not connected to this ritual, or the strange magical space it explores - the names are simply coincidentally similar.