As of Summer 379YE, the Stonefield Ice Caves are controlled by the Thule and are no longer an Imperial bourse seat. This page reflects their status before they were lost to the barbarian orcs.

The Stonefield Ice Caves are found on the lower slopes of the Silverpeaks in the Wintermark territory of Sermersuaq. Custodianship of the Caves granted an Imperial title; a seat on the Imperial Bourse; and a seasonal bounty of valuable ilium. They were ceded to the Thule, along with the rest of the Silverpeaks, as part of a peace treaty in Summer 379YE.

This massive glacier in the Silver Peaks contains large deposits of ilium. The ice is every bit as hard to work as stone and the precious metal must be picked from the walls of the frozen tunnels. It is no surprise, given they are burrowed into solid ice, conditions in the caves are freezing all year round. Workers must constantly fight the numbing cold that saps their strength, as well as the constant threats of icefalls. As with the Face of Ikka in the Suaq Fount, relics of a bygone era are occasionally chipped out of the ice. While the majority of these artefacts are mere curios, some possess lingering magic. Of the few magical relics that are uncovered, a disturbing number possess grim curses as well as useful properties.

In 224YE, a major incident occurred in the caves when a team of workers unexpectedly uncovered what they initially took to be a statue of some sort but which soon proved to be a malign creature that slaughtered all the workers and then went on a rampage through the caves. It was eventually brought down by a band of heroes - according to stories the exemplar Inga Tarn herself dealt the final blow to the creature with her rune-bound hammer. For decades afterwards, an additional detail of Wintermark warriors was assigned as to guard the workers but was eventually discontinued in 268YE in the light of no further incidents.

To reward the Winterfolk for the risks they take, during the Spring Equinox control of the Stonefield Ice Caves was allocated to whichever military unit performed the largest raid against the enemies of the Empire. During the Summer 379YE summit, after a year of bitter fighting in the SIlverpeaks. the Imperial Senate voted to accept a peace treaty negotiated with the Thule. As part of the terms, the mountains were ceded to the barbarian orcs - which included the Stonefield Ice Caves. Some Winterfolk are still (perhaps understandably) angry that "what the Thule failed to take in battle, the Senate simply gave them." 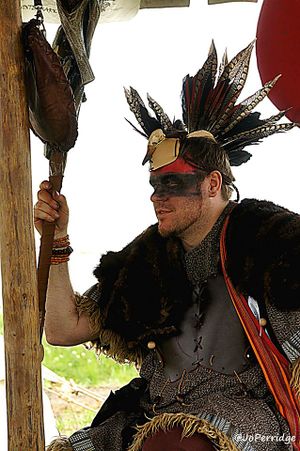 The Seat has no particular responsibilities; they simply receive a bounty of ilium which is theirs to do with as they will. If the Stonefield Ice Caves were to be threatened in any way, it would be the responsibility of the Seat to deal with those threats. Likewise, if any particular opportunity were to arise related to the Stonefield Ice Caves, the Seat would expect to be consulted as to how that opportunity might be resolved.

The Seat has control of a source of ilium which they receive directly. They can dispense this resource as they choose. Production is 5 rings of ilium every season.

As with all ilium Bourse seats, the holder of the title is determined during the Spring Equinox. Control of the Stonefield Ice Caves was assigned to whichever Wintermark candidate received the most support from Wintermark owners of military units that had earned votes over the past year by doing paid work. The Stonefield Ice Caves are not currently under Imperial control. Votes are recorded in private in conjunction with the civil servants who support the Bourse.

Custodianship of the Stonefield Ice Caves is retained for a year, or until the citizen holding the seat dies, or steps down. An Imperial Bourse seat cannot be revoked by the Imperial Synod.

This tile is no longer being elected as the Bourse resource it oversaw is not in Imperial hands. The table to the right shows the citizens who have been elected to hold the title of Custodian of the Stonefield Ice Caves in the years since Empress Britta died.