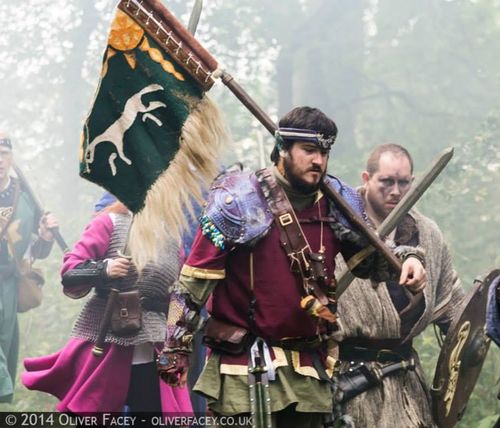 A Banner-bearer with a Thaneshall banner provides battlefield support to the warriors of their hall.

A Thaneshall Banner is a potent magical reminder of the history and martial prowess of the people of the Empire. It usually bears a symbol that represents a historical hero, one who performed great deeds on the battlefield. Bleached wool and vibrant dyes are used to create the banner itself, while the weirwood banner pole is usually reinforced with green iron and embellished with dragonbone and orichalcum.

The Thaneshall Banner takes its common name from Wintermark, but it is known throughout the Empire. Among various other nations it might be called a dhomiro's flag, exarch's banner, earl's pennant, steward's standard, warlord's banner, wolfshead standard, brand's rally, boyar's banner, or an arbiter's inspiration. The warrior-standard bearers who carry a Thaneshall Banner into battle often draw on its strength not only to allow them to inspire their allies, but also to renew their their fighting spirit or even will to live. Others lead the way into the thick of battle wielding their banner in one hand and a weapon in the other - anything from an Apprentice's Blade to a Winternight Lifestealer may be granted extra potency by the standard's magic.

One of the most famous examples of this magical standard is surely Winter Fury, the white-stag battle-flag of Queen Ilsin whose army was apparently devoured long ago by vallornspawn in Hercynia following a short-lived war with the pre-Imperial Navarr.

“Boy, which ones are ours again?” the old general asked his aide. He stood atop a hill flanked by his personal guard. He squinted with rheumy eyes at the mass of bodies engaged in brutal combat some distance away.

“Err, the ones with the shield, sir, to the east” the young lad replied, handing the general another goblet of spiced mead. At nearly seventy the general had been present during the orc rebellion and he made no bones about his feelings for them as Imperials.

“Well, boy, send one of those Navarr runners to them. Tell them I need them here immediately, and tell them that’s an order.” He sloshed back the goblet of mead before dropping it to the floor. His bodyguards kept their expressions neutral, but it was obvious they were worried about their general.

His aide cleared this throat nervously.

“But, general, sir ... they’ll never push through that horde, they’re a defensive legion sir, you already retracted their assault detachment, we need to reinforce them if anything. Sir."

The general scowled, moving his liver spotted hand to the hilt of his sword, his bodyguards visibly bristled with anticipation.

“I said that is an order” he snarled through clenched teeth.

Tuk looked down at the diminutive Navarr changeling standing before him. His huge steel-clad frame dwarfed the tiny man, but he showed no fear of the massive orc warlord. The Navarr opened his mouth but before he could reply, the orc snatched the parchment from his hand, reading it quickly and tearing it in two before throwing it to the ground. He sighed.

“Well, if the general orders it then it shall be done, tell him we shall be there before the sun moves a hand-span across the sky.”

The Navarr nodded and darted off as quick as he had appeared. The warlord returned to his warriors who had been given a brief respite in the fighting after driving back another barbarian assault. He knew they couldn't hold out forever but the last order they’d received had been to hold there and hold they had. Now the general had ordered them to move and by the crown he would do it as best they could.

He snatched their banner from the ground where it had stood triumphant for almost half of the day, the bright white of the banner splattered with gore from the days fighting, the legion symbol all but masked in viscera. The horse skull emblems, cast in green iron and dangling along its length were encrusted with drying blood and jangled as he lifted it. His warriors fell silent as he spoke.

“Warriors of the Steelstorm, you have fought and you have killed for the Empire. We have been as a rock amongst the tide of our barbarian kin, they have crashed upon us and we have broken them!”

They cheered enthusiastically, banging their shields in unison.

The warriors cheered and stormed towards the barbarians where they mustered for another assault. Warlord Tuk stood proudly at their centre, blade in one hand, banner in the other, surrounded by a dozen orcs, shields locked and blades in hand. Behind their vanguard a handful of warcasters ready to mend shields should they be cleft by the Jotun's great-axes.

With a mighty roar the warlord stepped up the pace, his warriors matched him, and the enemy likewise broke into a ragged charge. The two forces clashed in a storm of blades. Where the barbarians met Imperial steel and strong shields, the Steelstorms' blades met orc flesh. Inspired by the banner, wherever their blades fell so too did a barbarian. Limbs were shorn from bodies and bodies where sliced in twain.

Warlord Tuk held the banner high as he could, pushing his advance through the heart of the Jotun line. The barbarians fell back before the ferocity of their attack, their forces routing before the wrath of the disciplined warriors they faced, driving toward the far-off general’s position.

“Well, they might be barely better than those savage dogs we face, boy, but I have to respect their dang tenacity” the general told his aide, already penning his next orders.

“Give them this. Those Marcher lads need support down by the valley and I don’t want them orcs hanging around any longer than necessarily. They worry the troops. Dismissed.”
Retrieved from "https://www.profounddecisions.co.uk/mediawiki-public/index.php?title=Thaneshall_Banner&oldid=48867"