The Fountain of Thorns

The Fountain of Thorns

The Fountain of Thorns is a very powerful ritual tool attuned to the swirling magic of the Spring realm. While many are crafted in the shape of a wooden or bone spheres or orbs, it is much more likely that the item takes the form of a bowl, cauldron or chalice. As with many items associated with the Spring realm, it tends to have an organic look, as if it were grown rather than shaped by craft. Many items are irregular, and most have small thorn- or hook-like protrusions scattered at random across their surface.

During rituals the Fountain of Thorns often plays a central role, a powerful reminder of the magical power a coven wields. As with the less-powerful Green World when in the form of a bowl or chalice, it is often filled with liquid at the beginning of a ritual and passed around, each member of the coven drinking from it or adding a drop of blood to it in turn. Even when it is crafted in another form, it is common for ritualists to anoint it with their own blood during a ritual, pricking their finger on its thorns or cutting their palms with a ritual knife. Especially among the Navarr, a Fountain of Thorns is likely to be stained with blood after only a handful of uses. By contrast the magicians of Highguard and Urizen are often careful to keep the item clean, washing it in fresh water after every use to prevent it darkening and (if some stories are to be believed) malignant.

A Fountain of Thorns is usually only marked with Wintermark runes if it is crafted for the use of a Winterfolk coven. More traditionally, they are inscribed with representations of the constellations of The Fountain or The Claw. 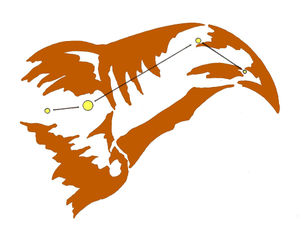