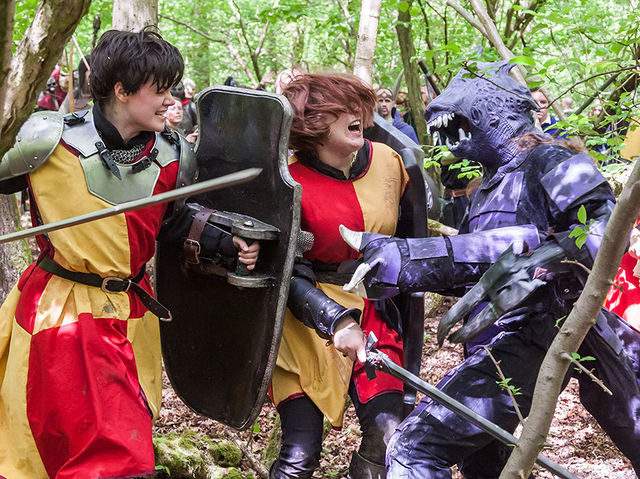 The trogoni are somewhat humanoid creatures with insect-like traits that live deep underground.They are most commonly encountered in the mountains of Urizen (and presumably Skoura and Axos), but are not solely found in the south-eastern peaks. They are significantly less common in the mountains of northern Wintermark and Varushka. Some miners report creatures that sound very similar to trogoni attacking and infesting tempest jade mines, feasting on the raw tempest jade. There are also occasional reports of the Thule barbarians employing monstrous beasts that sound a lot like magically altered trogoni. Whether these are the same species or a related species is not clear.

What makes trogoni a problem is that they seem to be drawn to areas where mana is focused; they attack mana sites, consuming the mana crystals and then seeming to feed on the magical flows. While they do not seem to deplete the magical energy flows, their feasting can prevent the formation of crystal mana while they are present; they can also accidentally destroy any improvements attached to the mana site. The more powerful the mana site, the more trogoni are likely to gather there. A pack of trogoni will defend a captured mana site with rabid intensity.

They seem to possess a natural sense for magical energy, and have been observed charging towards and attacking anyone who performs an incantation in their vicinity. On the few occasions they have been exposed to ritual magic. they apparently enter a berserk frenzy attacking everyone and everything nearby in an effort to overwhelm the ritual. presumably to feast on the mana crystals used in performing the ritual. When they are encountered outside a mana site, they are drawn to consume any mana crystals they can find. They seem to have no interest in crafted items, but some scholars theorize that they are capable of consuming and drawing sustenance from the power of ritual enchantments.

The trogoni do not seem to eat conventional food, and do not kill animals or people to feast on them. Indeed, when there is no magic in their vicinity they are not especially hostile - they will warn off intruders or threats, but do not attack unless provoked or they detect the presence of mana crystals or magical spells.

A single trogon is usually a match for an armoured warrior or two. They possess a tough carapace and savage rending claws (capable of shattering shields into splinters and even digging slowly through raw stone). The majority are around human sized, but there are reports of occasional encounters with much larger creatures. They seem to possess only animal intelligence, and lack the ability to engage in anything other than simple animal tactics. To date nobody has reported an encounter with an immature trogoni, and it is not known how the creatures reproduce.

The trogoni are rarely used in heraldry, but are occasionally adopted as symbols by groups who are skeptical of or hostile to magic, such as Threshers.

Trogoni are occasionally are a threat to isolated mana sites or tempest jade mines. Trogoni do not form massive swarms; a pack is likely to number between three and a dozen or so, although larger groups are not unknown. It is quite acceptable to have encountered and killed trogoni in your background, or to have lost resources to a trogoni attack; a background involving the domestication or breeding of trogoni is not likely to be approved however.