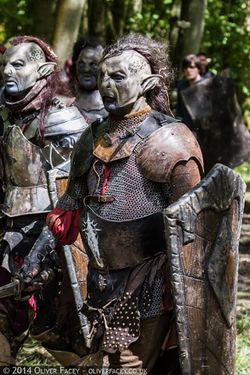 The first suits of winterborn warmail were crafted in Varushka in the early years of the Empire, where the artisans of Volodmartz discovered new techniques of working the metals from their abundant mines. These techniques involved subjecting the alloys of orichalcum and weltsilver to the freezing temperatures of the mountain tops in winter, a process which toughened them beyond all expectations. Although this armour can be made in any cool cellar or tunnel, it is widely held that the very best examples are those worked in the bitter cold of Wintermark and northern Varushka during the depths of winter.

Due to the vast expense of the materials and the scarcity of such skilled armourers, this armour is truly rare, every suit individually named and worn by the Empire's most renowned (or most wealthy) warriors. Even generals find it difficult to acquire and look jealously at any collegue who dons it. Freeborn generals often strive to acquire suits of Winterborn Scale. Should they die during the post and their armour is retrieved, their family will often give it to a talented young warrior to give them some of the deceased general's strength, even after the enchantment has worn off.

Empress Varkula wore a suit of this armour on campaign, and towards the end of her decades-long reign she tended to wear it even when she was not on a battlefield. Partly in honour of this warlike empress, and partly from considerations of practicality, this armour is popular with draughir from many nations, resulting in popular epithets such as Draughir Warplate, Dreadlord's Panoply and Hungerer's Heart.

Virtueless dogs of the Varushkan wilds, filth that descends from the tree-line to threaten my Empire, look upon your enemy! For all your play-acting the terrors of the unknown night, you are lambs before my ravenous slaughter. I am your nightmare of rampant civilisation come to kill you without mercy or honour. I am the conqueror with the strength of nations come to drive you from your land. I am the fire that is fueled by the hate of millions, and I declare this vale mine, this forest mine, these mountains mine, and this army mine to take them with!

Look upon your enemy, o' mangy curs of Miekarova! There is more strength in my armour than in the best of your warriors!The Carrion Queen, Act 1, Scene 2
Retrieved from "https://www.profounddecisions.co.uk/mediawiki-public/index.php?title=Winterborn_Warmail&oldid=60902"