It is not possible to simply create a spontaneous effect. Significant preparation is required during which a magician explores various theories, considers the techniques used to create other similar rituals, and tries to take into account the many variables that might effect the flow of magic during an impromptu performance. By using crystal mana, the magician can test their theories and eventually work out a rough-and-ready method for creating the ritual effect they are seeking. The result of these painstaking calculations is a arcane projection. 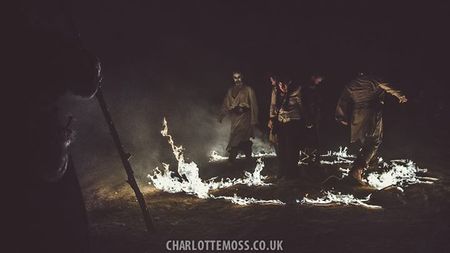 Winter magic from a Kallevesa coven

An arcane projection is a set of notes that contains all the information needed to attempt to create a spontaneous magic effect. The projection is essential for completing the magic; only the magician or coven that has possession of the projection can attempt the spontaneous effect described. The contributors must still have sufficient ranks to perform the effect, the projection merely allows them to make the attempt.

An arcane projection must incorporate numerous hearth magic effects beyond the magicians' control, such as magical tides, the seasons and the constellations. Because of this necessity, a projection is only useful for a single event, and must be calculated at the event. By the time a season has passed, too many factors have changed and a new projection must be prepared if the magician wishes to attempt the magic at another event.

A projection is similar to a ritual text but is usually less detailed. It contains all the rules for performing the effect, but does not usually include descriptive text or in-character commentary. Because of the similarities, it is possible to use a ritual text in place of an arcane projection to perform the described effect spontaneously if no-one present has mastered the formulaic ritual.

For logistical reasons, you cannot request an arcane projection by email - you must speak to a referee at an event.

Preparing an arcane projection is an arduous and expensive task that can only be attempted by a magician who has one or more ranks in a realm. The magician must use their magical skills to calculate the magnitude of the effect they are trying to create. To do this requires the magician to use the power of a mana crystal.

It is possible to prepare more than one arcane projection at a time, or to prepare several possible variations of an effect, but each variation is considered to be its own projection; you must spend one mana crystal for each projection you wish to create.

You will need to speak to a senior referee (usually Graeme Jamieson) to prepare an arcane projection. A referee will be available to handle new requests and return completed projections at set times throughout the event. These times are:

The referee will talk you to about the spontaneous effect that you are trying to create and the realm you are trying to use to do it. If the effect is possible they will calculate the level and magnitude of the magic that you need to achieve to create the effect and give you this as an arcane projection at the next scheduled time. If you ask for help with an arcane projection outside these hours and our senior referees are not busy they will try to help you, but if they are busy doing anything - including taking a break - then you will be asked to pop back at the official hours. Our senior referees are always busy on Friday of an event.

In-character this period reflects the time required to perform the calculations needed for the projection. Out-of-character it gives our referee team the time they need to calculate the realm and magnitude of your ritual effect.

When you are planning a spontaneous magic effect, it is a significant help if you provide a good in-character description of what your character or coven would like to attempt. It is just as helpful if you provide a clear explanation of what you would like the out-of-character rules outcome to be. If you don't provide either of these two details then our team will make them up, and if they are very different to the ideals you had but didn't tell us this could result in an arcane projection that is not useful to you.

You cannot specify what magnitude you want the spontaneous effect to be. It is the job of the senior referee to calculate the level of magnitude required. It is helpful to state what realm of magic you want to use to perform the effect, or if you have a choice of realms that you could attempt it with. Many magical effects are best produced with a single realm and some effects cannot be produced at all with the wrong realm. The senior referee will try to help you pick the best realm to perform the magic with if you have a choice.

In some rare cases a divination will provide enough insight into a subject to allow an arcane projection to be created without the normal preparation. For example, a coven might examine a patch of enchanted mushrooms with Clear Lens of the Eternal River and learn that they could perform a Magnitude 5 Winter ritual to quickly destroy all the fungi. The referee will give them an arcane projection to reflect this knowledge; without the need to spend any additional crystal mana or hours of preparation.

These special circumstances are always very narrow and specific. The coven should not assume they could use this spontaneous magic to destroy other magical plant life, for example. In all cases, the arcane projection remains valid only until the end of the event.

Spontaneous magic effects are expensive and difficult to create. The magnitude of any spontaneous effect is at least 50% higher than an equivalent formulaic ritual that is part of Imperial Lore.