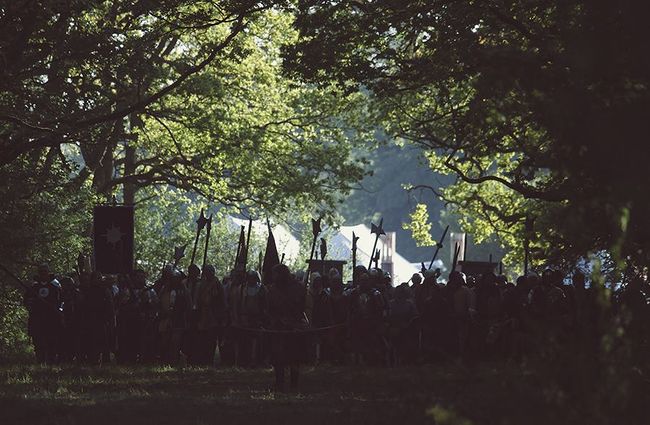 A storm of steel poised over the Empire; victory and defeat, triumph and loss, swirling and turning in the gyre of fate.

As 377YE draws to a close, war beats its iron drum beneath darkening skies.

In the east, massed Imperial forces assault the armies of the Thule in Karsk and the savage Druj in Holberg. In Holberg the tide is turning; the enemy driven back ... one pace, another pace ... The people of Holberg can stand on their walls again and see Imperial forces united in glory, where before there was only ash-black and poison-green. In Karsk, the rapacious Thule fall back before the hammer of the Marches, the shield of Wintermark and the implacable tread of Varushkan boots ... they salt the earth where they can, bitter as only the Thule can be ... but still, they fall back.

In Skarsind, the last fires of Thule oppression are extinguished beneath the boots of the Summer Storm; the forces there have fled back across the mountains to cower in their holes in barren Otkodov. There they lurk, licking their wounds and preparing for their next assault. Slowly, the Winterfolk return to their homes to see the devastation the barbarians have left behind; the armies are gone, but the taint of their shadowed touch remains and not all the dead lie still upon the battlefields.

Further south, in Casinea and Bastion, Imperial forces stand ready to sweep eastward and reclaim the lands stolen from the Highborn. Dawnish, Highborn, Navarr - the armies ready themselves to drive a spear into the heart of the Druj. As the winter winds howl across the walls of Haros Water, around the towers of High Chalcis, and through the ghost-haunted glades of Broken Ridge unseen voices seem to whisper "Soon. Soon."

In the west, the ceasefire holds between the Empire and the Jotun juggernaut. The borders are observed by the generals of both sides and if hot-heads and enthusiasts both Imperial and orcish take the opportunity to launch raids into each other's territory ... why, surely that is as it has always been? It cannot last. The Marchers will not forget their own, the brave yeomen of the Greensward suffering under the yoke of the savage raiders while the last Navarr in Liathaven strive to keep the flickering flames of civilisation alive in the face of their enemies, old and new.

Not all the borders hold; rumours fly of barbarians moving north to Beacon Point and Western Scout. Not Jotun, nor Thule nor Druj - a mob of vicious orcs out of the Lasambrian Hills. An army of brigands and bandits maybe, but well armed despite it and keen to exploit the weakness of the Navarr in Liathaven. While the Red Wind Corsairs are slowly pushed back in Segura, the star of the Lasambrian Hills rises on the ascendant. The Freeborn army barely holds against two armies - how much worse if this third army is pushed back from Liathaven into the lands of the Brass Coast?

In eastern Therunin, precariously connected to the Empire now by the passes of Morrow, answering rumours come of a force of Druj out of High Chalcis slinking over the borders into Peakedge Song. Druj scouts in Upper Tarn, sneaking through the marshes of Lower Tarn, bringing fire and poison and the death of peace.

In northern Hercynia the isolated orcs of the Glen of Shadows have lit the beacons of war, gathering their forces for who knows what purpose. The banners of Harak the Red are flown above disciplined units of scattered Thulish auxillaries and hungry bandits. They make no move to head south, or north to catch up with their retreated armies ... but they ready themselves for something.

So there it is, brothers and sisters. A storm of steel poised over the Empire; victory and defeat, triumph and loss, swirling and turning in the gyre of fate. The world holds its breath as one year dies and another begins ... and who will be alive, come the dawn?