Bailiff of the Grand Market

Bailiff of the Grand Market 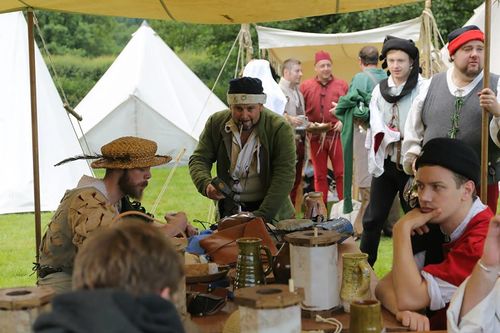 Fairs and markets are important events across the Marches.

The Bailiff of the Grand Market is an Imperial title awarded to a Marcher citizen. It is a Marcher position appointed through the Bourse but chosen by Marcher yeomen with votes allocated based on the size of their farm holdings.

The Bailiff has offices in Meade, but it is a rare Bailiff who spends much time there. While the title is associated closely with the weekly or bi-weekly markets of Mitwold, the Bailiff is regularly involved in trade fairs and markets across the Marches, and Marchers from every territory have regularly held the post. The title pre-dates the formation of the market towns, and comes from a time when almost every town and village in the nation would have their own regular market.

Traditionally the Bailiff's role was to ensure security at fairs and markets across the Marches. In return, they were guaranteed a hearty meal, a minimum of one meat pie and a tankard of ale. More importantly, however, to help the Bailiff meet the costs of their office they were given the opportunity to buy some goods before the market officially opened allowing shrewd bailiffs to secure bargains for themselves. Many markets considered it a matter of pride to ensure that the Bailiff turned a good profit in exchange for their hard work in keeping the marketplace safe and fair for all.

Within the space of a season, the Bailiff might find themselves in a position to buy beggar's lye and ambergelt at a fair from a village in the birchwoods of Upwold; a cask of Wintermark mead and some measures of dragonbone from a Suaq peddlar in a town square in Mitwold; a basket of tempest jade from a scowling stallholder at the great market in Meade; a basket of assorted herbs at a dour fair in Bregasland or even a handful of crystal mana at a strained gathering in Overton.

When the Marches joined the Empire some of the more expensive responsibilities of the Bailiff were assumed by the civil service. Marchers are loath to abandon their traditions however; the presence of an honest Bailiff was considered to be good for trade as it let everyone know that the market was safe to travel to. With the help of Emperor Giovanni the role of Bailiff was incorporated into the Bourse, to allow the civil servants to identify the individual with the most support from other yeomen.

The Bailiff is expected to ensure fairs, markets and trade gatherings in the Marches are undertaken in a traditional and honest fashion. They also have some responsibility for ensuring that the major roads between towns and villages remain free of bandits and feni who might otherwise restrict trade. In practice, this is quite a tall order for a single individual - many markets have their own local bailiff or sheriff who sees to the security of their fair.

Specifically, the Bailiff oversees the Grand Market in Meade which takes place on the third weekend of each month and attracts traders from across the Marches and even occasionally from Wintermark to the north.

As a ministry, the Bailiff of the Grand Market can purchase quantities of trade goods at a set price. The Bailiff decides how much money to spend during downtime from their character page. Money is removed from, and resources are placed into, the character's inventory when the downtime is processed.

In Winter 379YE, the office of the Bailiff of the Grand Market was gifted with a valuable artifact; the Bailiff's Club. A Thundering Mace enchanted with a signficiant bounty of ilium, it was received as thanks for the Bailiff's role in bringing to justice the murderous bandits who killed a popular trader named Martha of Stockland. The club is legally part of the regalia of the Bailiff of the Grand Market. When the Imperial title changes hands the item should be given to the new Bailiff with all appropriate haste.

This title is appointed during the Winter Solstice by citizens of the Marches who control farm personal resources. The larger the farm an individual has, the more votes they can allocate in support to a candidate. The voting is handled by the civil servants in the Bourse.

Only a Marcher character may hold the title. As a title in the Bourse, they cannot be revoked by the Imperial Synod

This title is currently held by Sebastian Shaw; it will be reelected at Winter Solstice 384YE. The table to the right shows the citizens who have been elected to hold this title in the years since Empress Britta died.