Banner of the Bold

Banner of the Bold 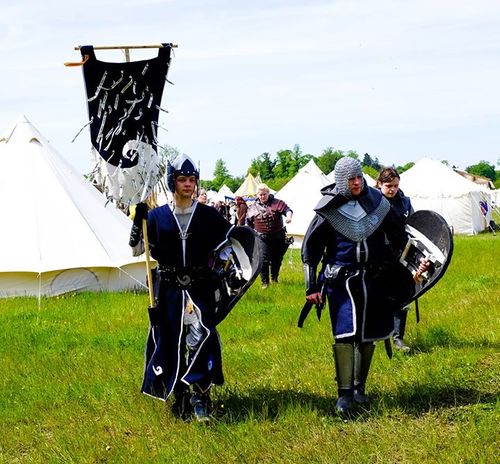 Each ribbon a name of the fallen, tied with a bell.

The intricate needlework required to embroider a banner of the bold is time consuming in the extreme. Trace amounts of dragonbone and iridescent gloaming are used to trim and reinforce the sturdy cloth of the standard, but it is the intricate designs worked into the fabric itself that provide most of the magic.

The true potency of this banner becomes clear when the bearer is exposed to malignant auras such as those produced by some horrors or eternals, evoked by heretics and blasphemers, or brought into being by enemies of the Empire to protect key areas.

As with most magical banners, a banner of the bold bears the appropriate symbols for the heraldry or livery of the soldiers who will fight beneath it. This means that the banners are most often made for commission, although some artisans focus their attention on producing fine blank canvases which can be embroidered or painted with appropriate symbols after they have been sold.

A banner of the bold often bears the runes Feresh or Tykonus worked into the banner pole, or embroidered around the edge. Some banners, especially those made by Dawnish weaver cabals use the intricate Summer sigil, carefully worked in thin silver or gold thread into the reverse of the flag proper.

Unlike many magic standards, a banner of the bold is bonded to only a single individual rather than an entire band. The protection and support it offers allows the standard bearer to brave dangerous situations to support their comrades, and gives them a small measure of inner strength to draw on while they do so.

It is said that the General Halmerad always insisted on having his command banner unfurled and present when he was due to appear before the Empress Varkula. This was, of course, a sign of martial respect, and not - as has been scandalously suggested by certain other scholars - an indication that he in any way feared his beloved Empress ...
Retrieved from "https://www.profounddecisions.co.uk/mediawiki-public/index.php?title=Banner_of_the_Bold&oldid=69799"