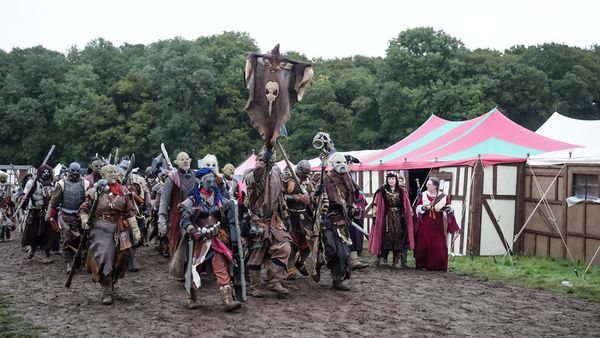 Mercenary banners are an old magical item whose invention dates back to the early days of the Empire. When the Urizen joined the Empire, it was their Sentinel Gate that allowed the elite forces of the Empire to be so effective on the battlefield. The only drawback was the way the essential nature of the Gate made life difficult for mercenary groups and other military bands. Such groups could choose to fight with their nation - or not at all. In response, Alda de Tassato, the infamous leader of the Silver Blades Carta, did a deal with the eternals of the Autumn for a year of service in return for help creating the schema for the first mercenary banner. She named the item the Gonfalon of Prosperity - but today most folk simply call them mercenary banners.

Centuries after their creation these banners remain most popular among the Free Companies of the League - but despite the name their use is not solely restricted to mercenary companies. They are also used by companies of Urizen sentinels, for example, who embrace the doctrine of offering assistance at the vital moment on foreign battlefields. Some bands may make temporary use of a mercenary banner to allow them to fight alongside allies when their nation is committed elsewhere - for example several companies of Hercynian thorns fought alongside their Wintermark allies in Skarsind before that territory was originally lost to the Thule, even though the rest of the Navarr nation was committed against the Jotun in the west.

A mercenary banner can only be invoked during the Muster of the Imperial Military Council. This is the point where the Imperial generals agree which nations will fight on which side of the battle. The enchantment is activated by the band member swearing an oath of service which must be accepted by the Imperial general whose nation the band will fight with. Every single character that is a member of the band at the point where the magic is invoked is affected by the enchantment. From that moment they may only use a major conjunction of the Sentinel Gate with the nation they have sworn to serve for the remainder of that event. A ref is required to activate the enchantment.

A mercenary banner allows a band to fight on Saturday rather than Sunday - or vice versa - it does not allow a group to fight in both battles. Regardless of any in-character considerations, all players are always obliged to follow the rule to monster one battle if they play the other.

The power of the Sentinel Gate is limited; to avoid disaster, the generals must balance the sides they will send on each conjunction using the numbers provided for them by the civil service. When a group activates their mercenary banner - the civil service will provide all the generals with updated numbers taking account of the effective change of nation by the band for that event. The generals can then balance their forces in light of the fact that the mercenary banner will be fielded alongside another nation.

General Dhana i Riqueza stared at the young boy stood before him, her incredulous expression revealing her disbelief. "Where is Captain Mateusz?" she demanded.

The boy straightened slightly, and smiled. He couldn't be more than thirteen years, but he looked the Freeborn general square in the eye. "Drunk sir. Three sheets to the wind. I'm here to give the oath."

The boy looked nervous, his hand clenched tight on the banner pole. Perhaps he was drunk as well and it was the only thing holding him up. The Hakima snorted with derision. "I'm not paying to hire a boy - let alone one not old enough to be blooded on the field. Get me your captain. NOW!" There were only minutes left until the end of the muster - the boy had better run and get his captain or the whole damn plan was going to fall apart.

"Captain always get drunk the night before a battle sir. Says it's best to fight with a hang-over. I'm here to swear the oath."

"I'm not paying seven thrones for a boy's oath." She turned her back on the boy, sighing as she did so. Now everything would have to be planned again.

The sound of the steel shod foot of the banner pole slamming into the wooden floor echoed round the Senate, silencing the room. The boy reached up and untied the banner allowing it to unfurl under its own weight. A blood red eagle rampant stared down at the Freeborn general.

"I am Patryk van Temeschwar, oath-sworn banner-man of the Holberg Eagles. I swear the Eagles will take the field for you. And you owe me seven thrones."

The Hakima general eyed the banner - the gonfalon - and silently cursed herself for a fool. She'd never seen a mercenary banner before but she remembered too late what the scrivener had told her of how they worked. The oath the boy had sworn would bind his whole banner to her if she accepted it. He might look barely old enough to pass citizenship but if the Eagles trusted him enough to give him their colours... then she was done under-estimating him.