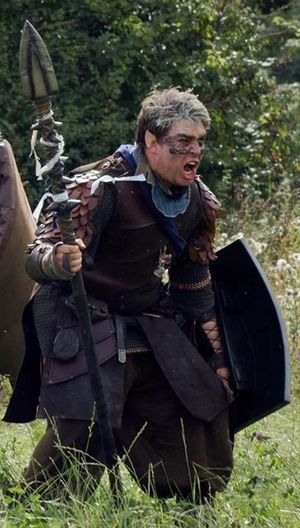 Vengeance, and the wrath of the changeling.

The first Barbed Spears were crafted and wielded in combat by the Navarr - they are especially effective against vallornspawn husks - but they are not the only people to make use of these weapons. In the League the weapon is sometimes called a Biting Glaive, and valued for its ability to inspire terror in opponents.

In some quarters these weapons are also known as Teeth of Vengeance, because they are often used to ensure the death of an opponent who has harmed the wielder or one of her companions. This specific usage of the Barbed Spear has caused concern in the Synod because it can help to encourage unvirtuous behaviour.

While it is common for a Barbed Spear to bear the rune Rhyv, they are often also marked with the rune Irremais.

Iuceph ducked, without slowing, and the two-handed battleaxe swept harmlessly over his head. He struck out to the left, and turned the movement into a tight spin, sweeping to the right and then rolling forward. He came to his feet, his heart pounding, his breath short, every muscle protesting. Both his opponents were still standing. He felt as if he was on fire.

He leapt forward, striking out again, catching another of the bandits across the shoulder, then twisted away before the woman could close the distance. He jumped and rolled again, swerving his body away from the thrust of the last brigand's clumsy strike, slicing his weapon across his side.

He felt dizzy for a moment. He wiped his hand across his forehead, and it came away with a sticky mixture of sweat, blood and yellow paint. He frowned. One of the bandits must have marked him at some point in his charge. He didn't remember it. The adrenaline began to sour, and he became aware of the familiar fizzing ache of the venom in his body. He looked over his shoulder to check what he already knew; that the dance was done.

The reavers lay where they had fallen, still, breathless. The brigands had tried to flee; they knew as soon as his glaive bit them that there would be no mercy for them today. They lay still now, each marked a second time by one of Graciana's arrows. These men and women, maddened by privation or greed, had learnt a hard and final lesson here today.

Now that the fight was done, the village healer came hurrying over with a flask of apricot brandy, swirling it vigorously to mix the sanguine hibiscus with the sweet liquor. The kohan accepted it with a nod and a strained smile, and allowed the doctor to tend his wounds and quiet the tempest in his blood.
Retrieved from "https://www.profounddecisions.co.uk/mediawiki-public/index.php?title=Barbed_Spear&oldid=51157"