This page details the magical polearm; for the exemplar, see Bolstering Bill (Exemplar) 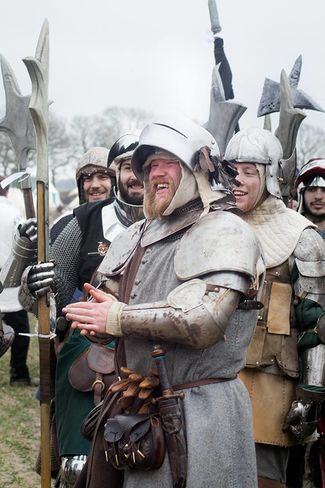 In addition to its magical powers, a Bolstering Bill is often good for morale.

The Marcher yeomen make use of these practical polearms in their fighting lines to help reduce casualties. A couple of soldiers armed with these weapons can provide speedy assistance to fellow warriors who have collapsed due to injuries, allowing them to move back out of the press under their own steam. A warrior armed with a Bolstering Bill may be a trained physician themselves, but more likely they are expected to keep fighting to cover the retreat of their comrade and keep the line solid.

The character of Bolstering Bill appears in a number of comic songs, stories and poems in various parts of the Empire as a simple yet well-meaning soldier-boy who helps his companions through any number of amusing or hair-raising scrapes with a combination of good humour, honest camaraderie and more than a little tough love. While these tales are generally accepted as being made up, the character of Bolstering Bill is sometimes mentioned as being an exemplar of Loyalty

In Highguard and Wintermark especially, it is common for a pair of champions to fight side-by-side, each equipped with one of these weapons (and occasionally other similar items such as the Bondring). In this case, the weapon is generally called a Brother's Beacon (Highguard) or a Brothers' Bulwark (Wintermark), regardless of the genders of the warriors involved. In other nations one of these weapons may be called variously an Indomitable Hook or a Good Neighbour.

“You've done me an immeasurable honour,” the exarch said. “You've done this whole chapter an honour. Your impeccable service, your tireless devotion... these serve as a shining example for your comrades and for all of us.”

The sisters each bowed their head in humble acceptance of the exarch's praise. Both were resplendent in their armour, the articulated plates polished to a dazzling sheen that shone beneath the sun's warm glare. The warm wind plucked at the pennants that hung over the courtyard's expanse, dappling the gathered chapter-folk beneath in dancing patches of shadow.

The exarch cleared his throat and carried on, projecting his voice as best he could across the assembly of his people. “With each of your victories, your virtues are made more clear. With each of your wise words to your fellows, you strengthen our whole chapter.”

He tucked one wisp of loose white hair back within his cowl, and nodded towards where the magister waited, bearing two silk-swaddled lengths. “In turn, we wish to honour both of you. The loss of either of you would be a loss as grievous to any of us as that of our own children, a loss to this chapter's very soul.”

Around the courtyard arose a quiet affirmation of the exarch's words. It wasn't a chant or a cheer, just dozens of good, true-hearted men and women speaking their own agreement with what was being said.

The younger sister was clearly feeling the emotion of the moment, but her cataphract training kept her expression firm and humble. Her elder sibling, though, was sniffing back the tears, and the exarch gave her a warm smile of encouragement.

“More than that, your virtues are so widely known now that when others speak of our chapter, they praise us for your work. As such, it would be churlish were we to show other chapters that we ourselves did not honour your devoted efforts. Because of this, I have had two sister-weapons commissioned for your panoplies, armaments to bear with you on your duties. These two weapons share the same love that you have for one another, and that we have for you. With these in your grasp, no foe will take you from us or from each other.”

The magister took his cue and strode forwards, struggling a little under the weight of his burden. The exarch took one at a time, drawing off the silk wrappings to reveal the patterned silver-and-green of the metal beneath; two fine glaives, Brothers' Beacons wrought with skill and artifice. The sisters, solidly-built cataphracts, accepted the weapons as he offered them with no heed for their weight.

The elder sister met his gaze, tears still bright in her eyes but matched by the smile upon her face. He'd never seen her so happy.

“Cataphract Jedidah, Cataphract Mehetabel, you are both examples that the rest of us would do well to follow. With these glaives, I ask only that you guard each other as you have guarded us, that we may never be robbed of your virtue by the Empire's foes."
Retrieved from "https://www.profounddecisions.co.uk/mediawiki-public/index.php?title=Bolstering_Bill&oldid=56576"